Trading a Friend for a Couch 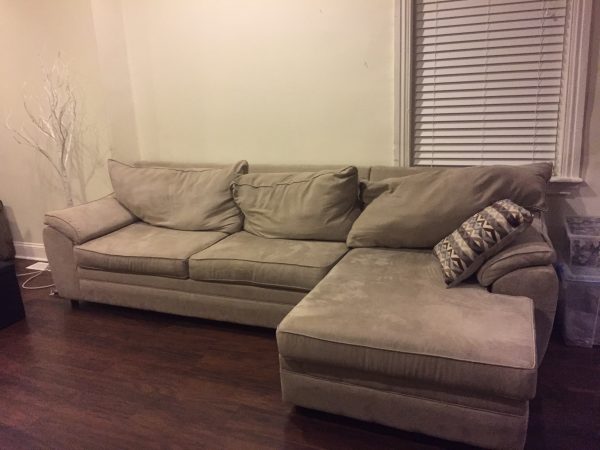 I graduated from college, started working, and then immediately moved into a two-bedroom apartment with one of my closest friends from school. We were excited—living together would be a dream. Just us, our favorite movies and TV shows, and a space that was ours. It would probably only be for a year, because she was planning on med school next fall, but it would be a good year.

I was making about $32,000 (before taxes) annually. Not a lot of money, but enough to feel a little extravagant before my student loan payments were due. My new roommate was making a little more than that; about $50,000 (also before taxes) for the year.

I wasn’t hellbent on spending a lot of money on the apartment, but I wanted our apartment to look and feel like a home: a couch, a TV, an entertainment center-type thing to house the TV, and a bookshelf.

I had a TV, I had a bookshelf, and I found an entertainment center at the Habitat for Humanity Restore (great for the environmentally cost-conscious shopper!) for a cool $40. I let my roommate skip paying for it under the guise that she “didn’t care if we had one or not.” I was surprised at her apparent lack of financial obligation to our home; her blatant “this is temporary” mentality.

But we still didn’t have a couch, and a new couch costs a cool penny. Secondhand was kinda gross; I didn’t want to sit on cushions that other people had already sweat on. I figured my roommate, a mild germaphobe, would agree.

At first, she did seem to agree. We would go in on a new couch, maybe one of the ones I’d been sending her over email. Then she started balking at the prices. She wanted something cheaper, but none of the couches we liked were cheaper than the $600-$800 range. We tried bargain shopping. The prices didn’t change.

Days passed and our living room sat empty. I would come home and have to go straight to my room to lounge. I didn’t like it. I wanted a couch, so I kept pushing the subject.

One thought kept dancing at the tip of my tongue: You make more than me! You do, you do, you do! This couch is a lower percentage of your income than mine. Help me make the apartment feel like a home. I bought the entertainment center, so you should make it up to me here.

Finally I foolishly agreed that if we bought a new couch, I’d buy her out of the couch at full price if she moved out after a year, despite couches depreciating immediately upon purchase. I did this because I wanted a comfy couch that filled out our large living room. I griped in my head because I knew she made more than me and this seemed a bit outrageous, but I wanted the couch so I kept my mouth shut.

Four months later, on the heels of egregious roommate disagreements that spanned cleaning schedules to sleeping schedules to opinions on how a space is used, my friend is moving out. She’s leaving behind a broom, a plunger, and a trashcan. She’s taking the table and the chairs and factoring them into the money I apparently still owe her for the couch.

I am crushed, confused, hurt, and still on the hook for the full cost of this couch, as confirmed in a passive-aggressive email exchange.

Then she told me that she would only pay rent on the months she lived here, which means I need to find a replacement roommate immediately. I sent back a flurry of messages: I can’t find anyone else to move in for three more months. I don’t want to live with a stranger. I don’t trust a stranger. I want to feel at home in my space. I bought a comfy couch to feel at home with my friend.

I know she makes more than me. My job is ending in December (it’s tied to an election cycle) so my income has an expiration date. I am looking for other jobs, but I was supposed to have a cushion. A built-in winter break. Time to breathe. But she is leaving by the end of October. I plead as best I can: pay while you’re not here, just to help me until I can find a new roommate. Like a friend would help me.

She responds that she’s moving out to save our friendship.

“You get to keep the apartment,” she says. But you’re leaving, I think, I try to say.

“But I shouldn’t have to pay for space I’m not using,” she says. “And you still owe me for the couch,” she says.

But you’re my friend, I think. And you’re leaving. Help me. Help me with the money I know that you have.

But I don’t say that. And so she leaves. I sign her out of the lease because she tells me it’s hell for her to live there if I don’t.

I pay two months’ rent by myself. She threatens to take me to small claims court when I suggest that signing her out of the lease absolves me of paying her for the couch. I’m $1,500 down a hole I could never have imagined when we were smiling and clutching our graduation caps together.

I send her a Venmo payment with a couch emoji, a tragicomic ending. The entire ordeal has cost me somewhere around $1,800.

I am the only one sitting on my couch.

I realize my error.

Her money was never my money. It wasn’t even our money. It was hers, and although I thought I was keeping my mouth shut about our income disparity, all of our conversations—about the couch, about the apartment, about her leaving—were colored with the knowledge that I expected some kind of monetary deference from her, for my point of view and for what I perceived to be my smaller bank account. But she never viewed our relationship that way—instead she wanted to use her money (and subsequently her space and her time) as only she liked. So she left.

Not everyone will leave you, but some people will strongarm you. So tell whoever it is that you’re about to sign a lease with what you think is fair to share—what’s important to you—and then write it down. Because people will surprise you, and their financial sympathies are often very separate from the sympathies they offer as your friend.

Roommates, even roommates who are your friends, quite literally don’t owe you anything more than is legally required on a lease. Nobody owes you a damn thing unless it’s written somewhere that they do. So write it down, and maybe you’ll save yourself a friend along with those pennies.

Cassandra Kyriazis is trying to handle her post grad crisis with grace. Don’t @ her. Unless you want to @ her? And tell her this writing thing is, like, working.

1. We Did Good, Billfold
2. Question Wednesday
3. What I Learned From Five Years of Writing and Editing for The Billfold
4. How a Program Assistant Dealing With a New Paycheck System Does Money
5. Classic Billfold: What I Wanted From My Move to Portland and What I Got
apartmentsfriendshipmoney and relationshipsroommates