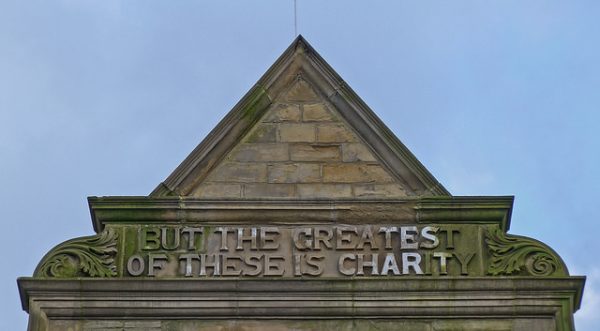 When looking for my first salaried job after two and a half years of post-college freelance/minimum wage work, my financial priorities were:

I had previously been making between $14,000–$19,000 a year by working as a combination of freelance radio producer, bike mechanic, restaurant server, and a number of other random jobs. At that point, the only giving I felt like I could afford was about $25 a month, thrown at whatever organization sent me the most timely fundraising email. I was legitimately excited that I would be able to start giving away higher amounts, and more regularly, to organizations and people that I love.

I now make $41,820 working in fundraising at a non-profit (so I guess I just generally love both raising and donating money). Donations (both tax deductible and not) currently make up my third largest monthly expense. I think it’s important to say here that I don’t have student loans, and I don’t have kids or any family members that I take care of. But also, this is something that I actively prioritize and value, and I have consciously built my budget to accommodate this expense.

When I was thinking about how I wanted to start donating my money, three things were very influential to me:

I figured that if I was going to actually give away a significant amount of money, I’d have to make it more manageable, automatic payments, so that I wouldn’t have to keep having the internal battle of “BUT I COULD USE THAT FOR [fill in the blank]!” It also means that it would be one category that I couldn’t really skimp on if I got cold feet one month — I’d have to literally cancel these recurring donations and make them lower (which I’ve had to do before, but I’d rather not do it on a regular basis).

Based on Laney’s resolution, I too decided to calculate 8 percent of my gross salary, divide by 12, and put that money aside to donate every month. Unfortunately, I ended up having some pretty high medical expenses over the past few years, so since I began this journey, it’s had to come down to 5–6 percent.

My recurring monthly donations are:

These donations total $136, which leaves $38.25 left over. I use that money to donate to things such as:

I keep track of these donations in a spreadsheet (I also have a category in my Mint budget). It’s helpful for me to have this list so that, as I’m preparing for my taxes, I can look back and see what donations I should be deducting (I don’t itemize, but Minnesota lets taxpayers deduct a percentage of their charitable donations on top of the standard deduction) although I think taxes are ultimately good and no one should donate as a way to evade/minimize their taxes!!!

It’s also nice to be able to look back and be like “oh yeah, that place was awesome! Maybe I should donate again this month.”

Sophie Nikitas is a grantwriter for an economic justice non-profit in the Twin Cities by day, and a writer, podcast producer, and avid budgeter by night. She’s also a co-founder of the Anthill Collective, which puts on fun and free community events about money and values.

1. We Did Good, Billfold
2. Question Wednesday
3. What I Learned From Five Years of Writing and Editing for The Billfold
4. How a Program Assistant Dealing With a New Paycheck System Does Money
5. Classic Billfold: What I Wanted From My Move to Portland and What I Got
charitable-givingcharitydonate