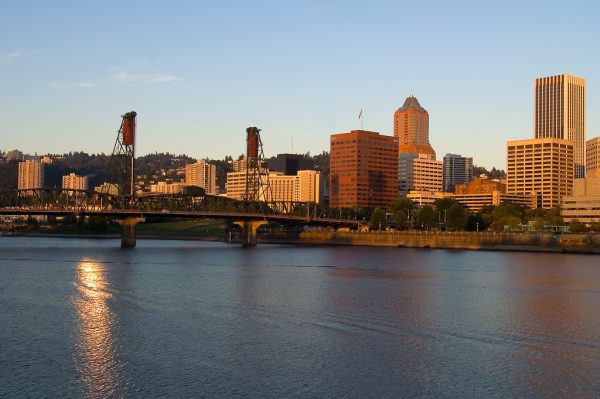 To celebrate The Billfold, we’re sharing some of our favorite posts. This piece originally published on March 14, 2016.

“I always knew I wanted to live out here,” my friend Tahiti told me from behind sunglasses as we sat outside a French bistro in Los Feliz.

It was mid-February, and I was spending the week in southern California, enjoying a break from Portland rain. I listened to her words and realized I’ve never felt that way about anywhere.

On that Friday afternoon in L.A., I’d been living in Portland for six months. I was on my third major U.S. city and while I’d loved Columbus, Chicago, and Portland, I had never felt a sense of destiny with any of them. Any move I’ve made as an adult has been made with confidence only because I could tell myself it was temporary.

“I’m moving to Chicago, but only for a year or two,” I told my loved ones in Ohio. “A year or two” turned into five, so I didn’t bother offering a timeframe when I announced I was leaving the Windy City for the Rose City. I remember thinking then that the lack of a deadline was exciting.

I moved to Portland last July, mostly because I’d had a very positive experience visiting Portland in 2014. I hadn’t planned on changing cities, but the timing made sense. The thing I had loved most about Chicago was a relationship I’d had with a boy there, and after it was over, I slowly soured on the city. Poor Chicago.

Portland was gorgeous, green, and very far away. When I returned to Chicago after my 2014 visit, I couldn’t stop thinking about how nice it had been to bike all around Portland. I was starting to play roller derby then, and I knew Portland had a huge scene for the sport.

“I could bike there year-round,” I thought, and as another Chicago winter arrived, so did my decision to leave, and I did.

Now it’s been a few months. I crashed my bike a month after I got to town, and while I skate here, it’s not the same as it was in Chicago when I had a bunch of teammates I knew really well. Part of that is on me not putting myself out there enough, and part of it is the fact that roller derby is more competitive in Portland, and therefore intimidating, than literally any other city.

As I sat across from Tahiti, also a former Chicagoan and Midwest native, I felt envious of her love for and confidence in Los Angeles. Seconds later, I found myself thinking, Maybe L.A. is the place where I’m supposed to be?

It could be that I’m just extremely susceptible to vacation highs.

I turn 30 on the first day of spring. I look forward to it because I hear your 30s are when you start caring less about what other people think and when you begin to feel in control of your life. However, this milestone has come with some discontent.

As my birthday approaches, my thoughts keep coming back to that famous quote from The Bell Jar. Sylvia Plath describes a fig tree, full to the brim with ripening fruit, on which each fig is a different path she could choose for herself. She could choose a fig with a family and a house, or one where she’s an amazing editor, or one where she lives in Europe or Africa or South America.

“I saw myself sitting in the crotch of this fig tree, starving to death, just because I couldn’t make up my mind which of the figs I would choose. I wanted each and every one of them, but choosing one meant losing all the rest, and, as I sat there, unable to decide, the figs began to wrinkle and go black, and, one by one, they plopped to the ground at my feet.”

Thanks to some tumultuous 20s, I feel pretty confident now in who I am as a human being. I like myself a whole lot better than I did when I was 20 or 25, or even 27. The year I turned 28, I finally felt like I got my career on track and could at last see that everything I’d been doing up until then was working toward that career move. It hadn’t all been a waste like I worried it was.

So naturally, of course, with sense of self and purpose in order, I began to feel unsettled in another area: home.

I’ve found myself asking what I came here for, and it doesn’t feel great. It’s been winter, and while it isn’t snowing, it’s been raining almost every day. I never feel truly warm and I don’t go outside to enjoy the fact that the world here is still green and lush. Why did I leave my friends and family and the Midwest to move to Portland and sit in an apartment?

I find myself daydreaming of being closer to my family, and minutes later, I’ll remember how great it felt to hike in Griffith Park with Tahiti. And then I’ll remember standing with my Portland friend Betsy at the base of a beautiful, natural waterfall last summer, feeling its cool spray on our faces. So many figs, each of them dangling before me. They rot as I write.

I’m not sorry I moved to Portland — I’ve met a ton of great friends, it doesn’t snow here, and it’s gorgeous. I still work for my awesome Chicago-based company, and I write for a local Portland paper on the side. I’ve established myself well here, but I know when it really comes down to it, I still don’t feel like I really live here. I feel like I’ve been on a months-long vacation during which I continue to do my day job from someone else’s strange apartment full of new furniture.

I don’t know what I thought would happen when I moved to Portland. I think I just thought this was the place where everything would fall in line, where I would magically become an adult. And in many ways, that is true — I live alone for the first time in my life, and I am able to support myself. My freelancing side career is healthier than ever. I take better care of myself here and make myself go to the gym and sometimes I eat vegetables.

I just thought I would finally feel settled. But it all still feels so temporary.

I find that at the same time, I miss my hometown, Columbus, and Chicago and I can’t pick whether I’d rather be in one of those over Portland or not. On a Friday night, I want to be eating cheesesteaks at the bar by my old Chicago apartment and getting after work drinks with my friend Stacey in Columbus. I want to be catching a movie with my brother in Cambridge and hanging with my best friend from high school in our hometown. I want to be in all of these spaces, simultaneously.

This isn’t Portland’s fault, and I’m not even totally sure it’s my fault, either. And maybe it’s not such a bad thing to want to test out other cities beyond where I’ve been, especially since now I’m fortunate enough to have a career that is portable.

Tahiti is lucky to know where she belongs, but I am lucky, too. I’ll never wonder what it would have been like to move to Chicago for a few years, or try out the west coast, because I did those things. No matter where I end up, I feel bolstered by the fact that I was brave enough to try.

Meryl Williams is a Portland writer who is chronicling her life as a roller derby girl via her awesome TinyLetter. She loves Rilo Kiley and most cheeses.

1. We Did Good, Billfold
2. Question Wednesday
3. What I Learned From Five Years of Writing and Editing for The Billfold
4. How a Program Assistant Dealing With a New Paycheck System Does Money
5. Classic Billfold: What I Wanted From My Move to Portland and What I Got
classic billfoldmovingportland