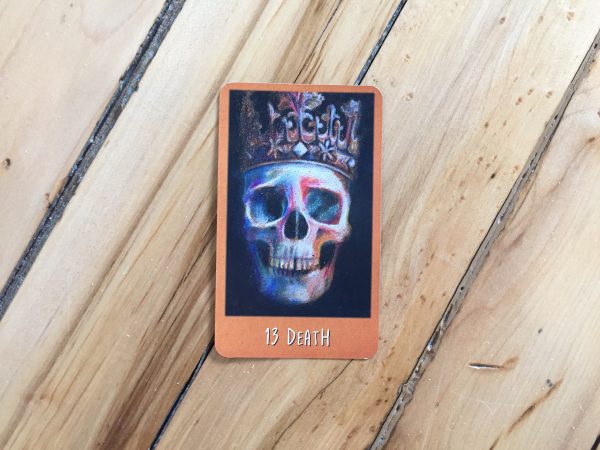 NICOLE: Tell them how many times we drew the Death card.

NICOLE: All the time. In EVERY SINGLE TAROT READING.

NICOLE: And we even re-ordered and cleansed the deck under the full moon just to make sure we weren’t shuffling badly, and then we picked it up and shuffled again and cut the deck three times and..

NICOLE: THE VERY FIRST CARD WE DREW WAS THE DEATH CARD.

NICOLE: We should tell them that death means change, in tarot world.

NICOLE: It can also mean death!

NICOLE: But our first thought, when we did the “what’s our new year going to be like” spread at the winter solstice, and then when we did it again with a different spread because the first one was a spread we’d found on Tumblr and maybe that didn’t count, and then when we did it again on New Year’s Day after we’d cleansed the deck because maybe those other spreads didn’t count, and every time it was DEATH DEATH DEATH, was “I hope this doesn’t mean The Billfold.”

NICOLE: Not “I hope this doesn’t mean a human.”

NICOLE: Right. So… we knew before we knew, sort of.

NICOLE: Do tarot, everyone! It will bring thoughts out of your subconscious and force you to emotionally deal with them!

NICOLE: But then when it became obvious that it would be The Billfold, it actually started feeling okay.

NICOLE: Well, it became a choice we made, rather than something that a skull wearing a crown implied was going to happen to us.

NICOLE: And then we could make choices about what came next.

NICOLE: Choice 1: make sure there’s at least one other space where Billfold commenters can have honest conversations about money.

NICOLE: We were pretty sure you could create your own spaces and keep the community going, but we’re also glad Lillian Karabaic set up the Oh My Dollar! forums.

NICOLE: Choice 2: figure out how to do more of what we do well.

NICOLE: We’re going to be teaching three online classes in April — one on copywriting, one on self-publishing, and one on developing a writing practice.

NICOLE: We’re going to be teaching even more online classes this summer, including a class on how to earn money as a freelancer. We’re also working with writers one-on-one as a developmental editor, so get in touch if you’ve got a novel/short story/essay that needs developing.

NICOLE: We’re going to continue writing informative articles about money for sites like Bankrate and Haven Life, as well as personal essays that might be about money and at least one piece about what other people should know before they start a business.

NICOLE: There will also be daily blog posts at NicoleDieker.com!

NICOLE: And… we should tell them about Choice 3.

NICOLE: Okay. Soooooooo… you know how yesterday we were all “I hope I’ll have another opportunity to create something where I can help both develop and pay writers in the future” and then we were like WHY WAIT, THE FUTURE IS NOW?

NICOLE: We’re going to start running guest posts at NicoleDieker.com. Two per month, at $50 per piece. We’re looking for posts that lend personal insight to any aspect of the creative practice, such as “how you balance your creative work with your other responsibilities” or “how you fund your creative work.”

NICOLE: I cannot believe we are ending our final Billfold Friday chat with both tarot and the words “the creative practice.”

NICOLE: I can. If there’s anything the Death card teaches us, it’s that things — and people — change.

1. We Did Good, Billfold
2. Question Wednesday
3. What I Learned From Five Years of Writing and Editing for The Billfold
4. How a Program Assistant Dealing With a New Paycheck System Does Money
5. Classic Billfold: What I Wanted From My Move to Portland and What I Got
chatsfinal friday chatFriday chathaha it's a pun because change is a type of money