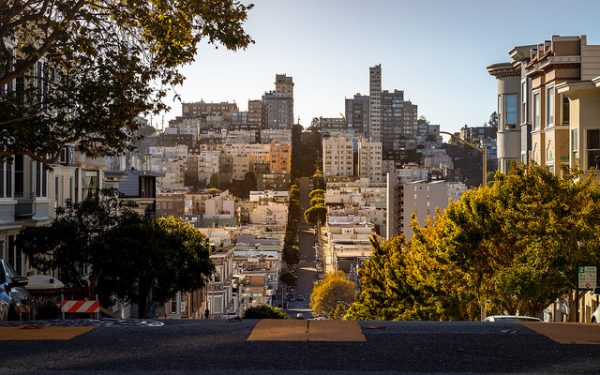 Jenn is a 38-year old program assistant in San Francisco.

So, Jenn, how much are you making?

I had to look this up because gross pay is not something I really think about. At the end of last year, I was making $59.5K gross with about $43K take-home.

How does your income compare to your expenses? Where is your money going?

Some months I think I’m doing okay and some, not so much. My biggest expense is rent — I pay $1,571.50 a month. I’m very lucky to have a rent-controlled apartment in SF (I think the max increase can be 2 percent a year) and I’ve been there for almost eight years. Under the old system of paychecks at my work, my second paycheck of the month was totally savings/rent, so I basically lived on just half my monthly pay at a time.

My cable bill also just too high, but Comcast isn’t known for just given you better pricing (yes, I know I could call, but I think they’ll know I’m not really going to leave cable, so it’s an empty threat!).

I don’t really budget the rest after my fixed expenses (PG&E, water, savings, cell phone, cable), I just keep an eye on my end of the month total as I go. So I’m sure some months I spend “too much” on groceries and some months, it’s clothes (okay, it’s usually clothes!). In my defense, the weather here is the same year-round, so I feel like I get sick of my clothes more easily/frequently than if I had a summer/winter wardrobe.

I think it’s going to get more interesting with our new paycheck system, though, so I’m cautiously spending as I get used to it.

So tell us about this new paycheck system! What’s going on?

For the previous eight years, I’ve been paid on the 1st and the 15th and (unbeknownst to me) our paychecks were basically the salaried version of our hourly rate. So we got paid a standard amount in every paycheck (variable by a few cents due taxes or commuter check, etc).

In 2019, the company has switched to a new HR system, so we get paid on the 7th and the 22nd and our paychecks are straight hourly, so how much you get in a paycheck is determined by how many days are in the previous pay period.

So our first check (in the new system) in January was for 82.5 hours, but our second check last week was for 90 hours. It’ll get fun in March because there are so few days in the second half of February, but I’m used to just living off the first check of the month, so I’ve got to save from this month to make up for it next month.

Got it. You’ll earn the same amount of money overall, just given to you at different times. Which means you have to plan your finances differently.

Exactly! I’ve been paid my whole month on the 1st of the month and also a standard every-two-weeks model at previous jobs, but this is new to me. I know I’m a creature of habit, but having to re-think my relationship to my paycheck is really throwing me for a loop. I guess this is where I need to actually budget for groceries and going out, etc., so I know that I WILL have enough money in small paycheck weeks.

Do you have a budgeting system (Mint, YNAB, spreadsheet) that you use?

I’ve been using Quicken since the early 2000s. My boyfriend at the time was using it (and I ended up doing his checkbook for him most of the time), I liked that it did the math for me. I can schedule a lot of transactions, so I have a good idea of where the money will be at the end of the month. I can also pull up graphs to see how much I’ve spent on any particular thing (which was good when I was trying to get my handle on my credit card debt and seeing a lot of frivolous purchases!). I’ve not used the budgeting feature, but it’s there if I wanted to. I manually enter transactions, even though I could link my accounts because it forces me to confront my spending daily and I think helps keep me in check.

That’s smart. I check my YNAB every morning.

I’m curious, though — prior to the new paycheck system, how did you know whether you were spending too much money? It would seem like the method you were using then would still work now, since you’re still earning the same amount of money overall. Your cashflow might be different, but a lot of people handle that with savings or credit cards (and if it’s the latter, they pay off the balance in full when the big paycheck arrives).

Basically, if it got to the last week of the month and I had money left, then I was doing okay. But most of the time, I’d have like $7 for a week or I just wouldn’t be paying my credit card off until after I got the paycheck on the 1st, so I was floating myself a loan from the next month.

Though I’ve been debt-free for about eight months, I think I’m nervous that my old habits of spending more than I have in my checking account on my credit card (I put all transactions possible on there for the REWARDS) will return. I pay off my credit card every day or two right now, which might not be possible if it’s a small paycheck week. Also since we’ve only gotten two checks (which were different) so far with the new system, so I don’t how small the checks might get, so it’s hard to budget against an unknown. I’m a planner and uncertainty is NOT my friend!

For sure. I get it. I’d be interested to see if your attitude shifts after a few months of this new paycheck system, once you learn more about how it works.

In addition to dealing with this new paycheck thing, what are your other financial goals? Are you saving for retirement? Homeownership? Etc.?

Homeownership LOL! I gave up on that dream when I moved back to California this time. I do have friends who have used SF’s Below Market Rate Program to purchase a condo, but I haven’t explored that option yet.

Mostly, I’m just in savings mode. I’ve got five different Barclays accounts allocating to different goals (emergency, travel, etc). I recently started saving for all the little annual fees (Amazon Prime, podcasts, back up/anti-virus subscription, etc) and that has been a game changer for me. I’m no longer raiding the emergency fund for $60 that’s not really an emergency!

I’m saving for retirement, but do NOT have enough. All together, I’ve got about $86K, which is about half what Fidelity recommends that a 40-year-old have. This job is the first one when I’ve really been saving for retirement, so I’m pretty behind. I made some dumb mistakes in my first grown up job and then didn’t stay at previous jobs long enough to qualify for much savings at all, so I didn’t start until I was almost 30. I’m VERY lucky though because my company saves 10 percent of my salary in an account for me and after 3 years, I was vested, so I can take that with me when I leave. That’s the bulk of my retirement savings right now. I don’t know where I’d be without that!

It’s the shortest vesting period I’ve experienced (once job you had to be there 10 YEARS!). Plus I’m able to save pre-tax an additional amount, so I’m trying to catch up, but it’s hard in a high COL city.

I also thought I was saving 5 percent in my 403(b) this whole time, but it turns out, I was only saving 3 percent. I’ve upped it to 4 percent for this year to see if I can stand to increase it more in coming years.

They say you won’t feel a 1 percent increase but I’ve totally felt it! That money is one pair of shoes you can’t buy, three restaurant meals you have to skip that month, etc. Did you feel it when you increased the percentage?

We had a calculator in our new retirement savings programs that I used at the beginning of the year when I realized the mistake and the difference between 3 percent withholding and 5 percent was stark! I backed off and picked 4 percent as a happy medium. I haven’t really felt it yet as my take-home the past couple checks has been similar or higher than before (due to aforementioned paycheck issues), but we’ll see going forward!

Two more questions, then: what do you think you do really well financially, and what do you wish you could do better?

I think I’m good at keeping track of my money on a micro level (my checkbook always balances; I haven’t bounced a check since the early 2000s; I’m debt-free). But I wish I could be better at seeing the big picture. Your financial runway metaphor has been bouncing around in my head for a few months now and while I’m not ready to switch to YNAB (I think we’ve seen how I like my ruts!), I do want to see what I do with my software or even the financial planner who comes to work monthly to see where I’m going. I don’t have a partner; I don’t have kids. For the foreseeable future, it’s just me, so I feel like I should have a better handle or what that future is going to look like.

There’s still time. And I’m sure you’ll get there.

Don’t be too hard on yourself! I think most of us are doing the best we can with what we have to work with (high COL, student debt, etc) and non-Billfold personal finance advice is usually aimed at all the things you’re doing wrong. Figure out what works for you and what doesn’t. Make incremental changes and share your experiences. One of the things I love about The Billfold is that we just help each other feel less alone in that we don’t know everything. I try to be very open with my college students about financial positives and negatives so they can see that everyone struggles with these things.