Work and What I Wore 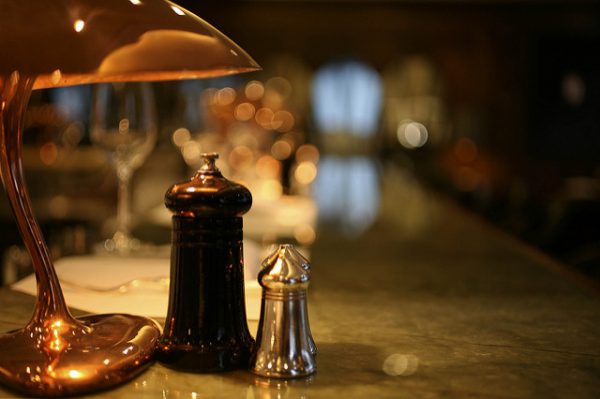 I worked at this corporate chain that sold “Mediterranean”-type food for about six months in 2007. I was hired as a counter person, which meant I received two black T-shirts with the company logo. I was in charge of finding my own black dress pants, black dress shoes, and black belt.

Looking back, I don’t know how the company founder and CEO came up with this uniform — but it was terribly unfashionable, even after I was promoted really quick as a shift leader which meant I was upgraded to a light blue polo-type shirt that signified my position as a step above the counter folk. The promotion meant I got paid two more dollars, if I remember correctly.

I’ve been working in food since I was 17 and, for whatever reason, these jobs always required black dress pants. I guess we’re supposed to dress as if we were doing something other than shilling food and cleaning up other people’s messes. This meant I already owned plenty of black pants, but I did buy black dress shoes. I’m almost always quitting these jobs, so I went to the Payless closest to me (which has since been made obsolete by Corporate America and society’s changing wants and needs) and picked up a $15 pair.

Even with our uniforms being terribly un-sexy, flings sprouted in that little restaurant. I was at the age when older men are ambrosia, even though the older man in this case was technically my boss (he was the general manager at another branch) and he was just in town to help out. The other shift lead took up with a corporate manager, and their fling was as big of a mess as you can imagine — but I really thought, at the time, that my relationship with my boss was true love.

Later I visited him in his hometown. I saw his closet had rows of the same light-blue shirts I wore every day, and I knew I had to leave the job and, not much later, leave him too.

Shortly after I left the “Mediterranean” restaurant and the relationship, I got another job in a soon-to-open chain. I’d never worked fast food before, mostly because I felt like restaurant work was much sexier and more of a career. Still, it was 2008 and I could not find a job, so I applied and promptly got hired.

All uniforms were provided and, as a manager, I was given two navy blue pants, two vests, one red scarf, and three light blue blouses. We looked like old-timey Pan Am flight attendants, but it was fine. It was fine. Also, the chain is Asian-owned, which meant my uniform, for once, fit me perfectly.

A month into the gig, I was bursting out of my uniform, swiftly gaining weight from eating up to twice (okay, sometimes thrice) a day at my workplace. I kept my old dress shoes from my last job because I wouldn’t get paid for a while and I was pretty sure I’d quit soon. My general manager constantly berated me for showing up at work with my less-than-stellar ironed uniform,  so I bought ironing starch and tried to iron meticulously every night before I went to bed. Then I’d get to work and five minutes later my uniform would be splattered with chicken grease and flour, so what was the point? I drove in my car with the windows down because I reeked of chicken grease, and no matter how many times I laundered I could still see the oil constellations on my clothes.

I only worked there for six months.

My first restaurant job required me to wear all-black clothing. I was a goth in high school, so I opened my closet and went to work. Later, I started wearing black skirts, black blouses, black tights and black Mary Jane shoes to have some semblance of a uniform; also because I was trying to get the executive chef to fall in love with me. Because I was 17 and life hadn’t happened to me yet, my budget consisted of four key things: clothes, food, cigarettes, and coffee. I must have spent thousands of dollars on clothes but I was still smart-ish about it and always shopped on discount. Still, I wish I could have kept/invested some of that money and I should have kept those Mary Janes — my madeleine of footwear.

Later, when I did catering work, I was required to wear black long-sleeve button-down shirts, black pants, black dress shoes, and a black tie. The staffing company sold the shirts and ties, so I just bought a black shirt ($20) and black clip-on tie ($5) from them. The shirt was astronomically large, but I didn’t really care because this gig was one of three jobs I had and I didn’t have the time or mental energy to look for better-fitting clothes.

At one point, I bought a pair of Express pants for $15 (down from $85?) and I finally knew what it was like to wear good quality clothes instead of the synthetic polyester crap that I wore at too many jobs. I thought one day I’d finally get a “real job” and wear the Express pants, but I just ended up wearing them for a couple of catering gigs and I was constantly worried that I’d spill something greasy on them.

But I mean, seriously, all black outfits at food service jobs are inhumane. After every catering gig, when we’re cleaning up and putting away tables and chairs, most of us are in various stages of undress. I stayed fully clothed, but as soon as I got home I took off my clothes to air myself out.

My current company provides free non-skid shoes but I’ve finally divorced myself from them. Those shoes never have enough cushion and padding, so after 8 hours or so of being on my feet, my calves, toes, and heels are wrecked. After four years of free shoes, I finally started wearing (in no particular order) running shoes, walking shoes, and sneakers. These shoes were right around the $50-$60 range, and while they worked somewhat, they didn’t have the all-important non-skid soles.

Kitchens are death traps. Oil meets foot and you’re out of commission (a couple of coworkers broke their wrists trying to break their falls). I’m lucky enough not to have slipped during my non-skid shoe years, but I felt like I was tempting fate. So, when my boyfriend asked me to go to look at Timberlands, I went and checked out their women’s section. I hate that companies market to women by using pink, but I tried the boots on anyhow because they were mostly black (with hot pink accents) and they promised to be comfortable for up to 12 hours on my feet.

The boots, while they looked anything but, were comfortable and elevated my feet with plenty of cushion from heel to toe. I stood up and rocked myself front to back, side to side, to see how they would hold up during long stretches of work. They were non-skid and steel toe, which is another plus in case a knife falls on my toes, or water boils over and splashes on my feet. The boots were over $100, the most I’ve ever paid for shoes of any kind. Paired with chef whites and ripped jeans, this uniform feels the most me.

1. We Did Good, Billfold
2. Question Wednesday
3. What I Learned From Five Years of Writing and Editing for The Billfold
4. How a Program Assistant Dealing With a New Paycheck System Does Money
5. Classic Billfold: What I Wanted From My Move to Portland and What I Got
clothingclothing seriesfood-servicejobsrestaurantsuniforms