The Cost of Wearing the Same Thing Every Day 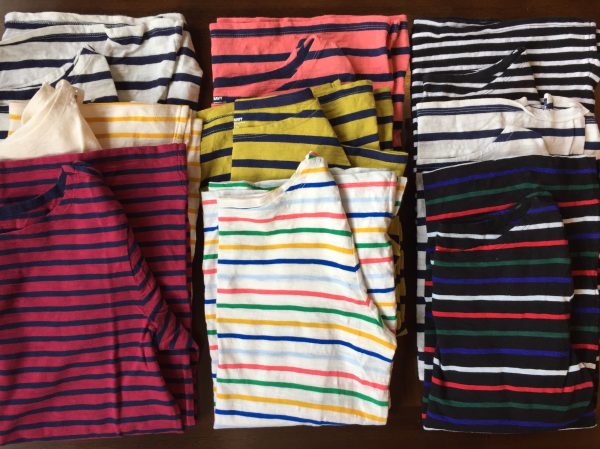 Last April, I bought a blue-and-white striped “mariner tee” from Old Navy, put it on, and took a selfie for my friends with the caption “I wish I could wear this every day.”

Since my friends are generally supportive of my dreams, they responded “why don’t you?”

I’ve been interested in the clothing-as-uniform idea ever since reading Gretchen Rubin’s The Happiness Project, in which she explains that she wears a white T-shirt and black yoga pants pretty much every day. That is not exactly my look — I’m a huge fan of color — but I like the principle. If you find one outfit that fits, is flattering, and, as Maggie Stiefvater puts it, makes you look on the outside the way you feel on the inside, why not buy fourteen of it?

I actually bought four more mariner tees from Old Navy last August, but I didn’t think seriously about making them my uniform until I started asking myself what I would wear to all of these Ragtime rehearsals. Part of it was that I needed something comfortable that I could move in, although I could have gotten by with a mishmash of the stuff I already had; part of it was the whole “first day of school, you can be whoever you want to be as long as you pick the right outfit” thing.

Part of it was simply that it had been years since the same group of people saw me every day, and I didn’t want to spend every morning putting together a new outfit.

So I bought five more mariner tees earlier this month, bringing the total up to 10, plus a hoodie that I can pair with all of them. (Yesterday it was 17 degrees out; tomorrow it’s supposed to be 42.) I also bought three more pairs of leggings because it’s way easier to bike in leggings than in jeans, and two sweatshirts that are identical-except-in-color to an Old Navy sweatshirt I bought last fall, so I’ll have a different look for weekends and weekdays and can keep the mental benefits of having specific clothing that I wear to work. 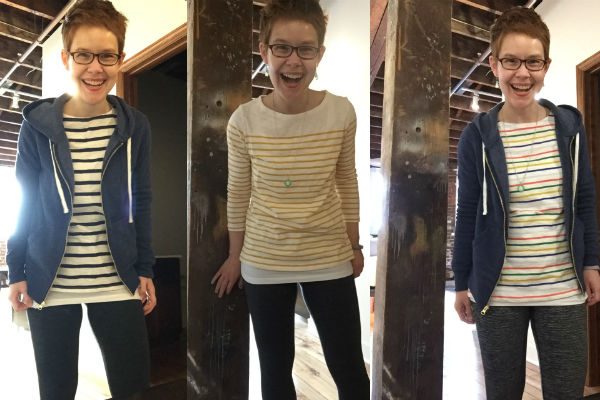 Yes, I can totally get away with this because I’m a freelancer, but even when I worked in an office I had a uniform of sorts; I bought a pile of Ann Taylor Loft sheath dresses and stopped worrying about what I needed to wear to work. Now that I have all of these identical shirts, I worry even less — I just grab whichever one’s at the top of the stack, and the freshly-washed ones go at the bottom of the stack once they’re folded.

Total cost of ten mariner tees, 11 layering tanks (to go under the tees), one hoodie, three sweatshirts, and six pairs of leggings (the three I bought this month plus the three I already had): $389.58.

To answer the obvious question: yes, I love having a uniform. (Are you really that surprised?) If there’s a situation where I need to wear something else, like a dress or a jeans-and-sweater look, I still have those clothes — but this uniform is likely to cover the majority of my needs at least until the summer heat starts kicking in.

The only sad part of all this is that Old Navy clothes don’t last forever, and I’ll have to decide whether I want to create another uniform in a year or so.

1. We Did Good, Billfold
2. Question Wednesday
3. What I Learned From Five Years of Writing and Editing for The Billfold
4. How a Program Assistant Dealing With a New Paycheck System Does Money
5. Classic Billfold: What I Wanted From My Move to Portland and What I Got
clothesfashionshoppinguniformyes I am becoming those "one less thing to worry about" people and I am fine with that