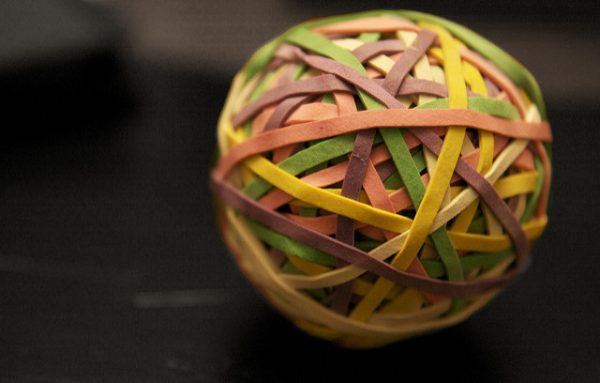 … When I Eventually Abandon My Moral Compass And Set Out to Claim My Piece of the Pie:

1. Manufacture need
As an entrepreneurial fourth grader with a target demographic of suburban, middle-class 9-year-olds, my actual product was very much secondary to the techniques by which I marketed it. I decided to build my business around a novel but utterly useless trinket. I collected rubber bands of various colors and dimensions, snipped them into segments roughly 1 centimeter long, and, most importantly, gave them a cool name: Chops.

To lend mystique and a mild sense of danger to the experience of purchasing and owning Chops, I carried my inventory in a suggestive Hefty sandwich baggie that I presented to potential customers only after leading them to discreet corners of the playground or lunchroom. There, I’d set down the bag, spread out the tiny rubber rectangles, and negotiate deals in secretive whispers. The price was ever-changing, depending on the supply that I had on hand. “Standard” Chops, cut from ubiquitous beige or red bands, sold for less than “Exotic” Chops made from bands of unusual color, thickness, or width.

I encouraged first-time buyers to choose an assortment that not only spoke to their individuality but also established a well-rounded collection — Tim, I’ll sell you two beige, three green, and, to match your Chucks, six red Chops, all for twenty-five cents; Chris, because you love Smurfs so much, let’s talk about putting together a more blue-leaning package, but I don’t want you to leave here without a few staple pieces, too. From there, customers could begin to acquire specialty Chops to refine their collections — There are only eleven white Chops in existence, and I keep seven in my private reserve, but for fifty cents you can have two of the remaining four; they’ll be the crown jewels of your collection. Of course, I limited the supply of certain colors to inflate their value, even going so far as to actively find and remove them from school grounds and hoard them in my desk.

I made probably a half dozen sales before someone thought to ask, “What do I do with them?” The question was answered, implicitly, by the jeers of my dedicated customer base: “They’re Chops. They’re awesome.” He became a customer.

2. Minimize production costs
The debut Chops shipment was sourced from materials found in my bedroom desk. After selling out on opening day, I needed to find a steady supply to keep up with demand, but I didn’t want the steep shelf price of rubber bands to cut into my profit. Fortunately, forsaken rubber bands are everywhere, just waiting to be appropriated. Once I opened my mind to finding them, they revealed themselves under school desks, on bus seats, in hallways and trashcans, and wrapped around bundles of produce. I took them, cut them, bagged them, and sold them at a division-by-zero percent markup. It was a pretty foxy con.

3. Build brand equity
A couple months before Chops dropped, and one week after Reebok-endorsed Dee Brown won the NBA Slam Dunk Contest, this one kid showed up to gym class in a brand-new pair of Pumps. I watched with burning jealousy from the opposing side of the dodgeball court as he knelt at the endline and ostentatiously squeezed the iconic, orange orbs on his tongues, just before the opening whistle.

The kid was an incompetent dodgeballer — my team sidelined him in seconds — but he, along with the kid with the extensive assemblage of slap bracelets always wrapped around his wrists, turned out to be an early and ardent adopter of Chops. Those two needed little convincing to buy into the brand, and their outspoken pride in ownership helped put the word “Chops” into circulation. This created the momentum I needed to entice the class’s less-conspicuous consumers, and within a couple days of my first sale, Chops frenzy was in full stride. For several days straight, I arrived in the morning to find kids talking Chops, comparing Chops, and awaiting my entrance with coins in hand.

During this boom time, a competitor emerged. In a lull before music class, I noticed three boys huddled suspiciously behind a shelf full of glockenspiels and xylophones. One was offering Chops knockoffs, and brazenly calling them “Chops,” to the others. He winced as I approached. I hovered over them, paused for a dramatic beat, and said dismissively, “Those aren’t Chops. They’re just cut-up rubber bands.” Then, as if by plan, another kid, a loyal customer, appeared behind me and echoed, “Yeah, those aren’t Chops!” The two almost-customers shamefully returned their worthless rubber bits, the would-be rival packed up shop, and I maintained my 100% market share.

4. Mind the bubble
I knew that the lifespan of my enterprise was limited by 1. the finite variety of available rubber bands, 2. the number of pliable classmates, 3. those classmates’ scant funds, and 4. the inevitable triumph of rationality. Enthusiasm began to wane after about a week and a half, but that coincided with a fortuitous event that gave my sales a brief second wind. Our teacher, Mr. Weiner, caught me in the middle of a transaction and politely demanded that I stop selling Chops on school grounds. I took that as an opportunity to label Chops as “black market” and raise prices accordingly. I made a few illicit sales before being caught a second time, at which point Mr. Weiner confiscated my entire stock.

1. We Did Good, Billfold
2. Question Wednesday
3. What I Learned From Five Years of Writing and Editing for The Billfold
4. How a Program Assistant Dealing With a New Paycheck System Does Money
5. Classic Billfold: What I Wanted From My Move to Portland and What I Got
classic billfoldside hustles