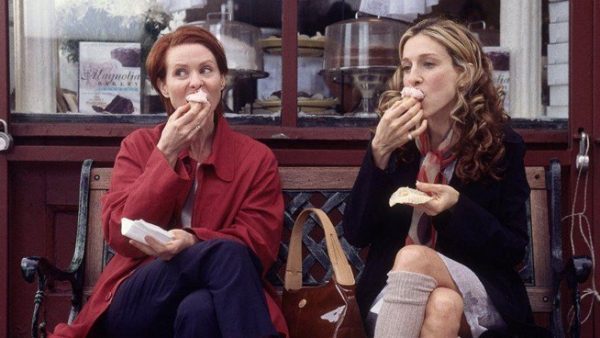 To celebrate The Billfold, we’re sharing some of our favorite posts. This piece originally published on August 5, 2014, and you can read old comments via the Wayback Machine.

There is something strange about the way people wait in lines in New York City for food: the bleary-eyed standing out the door during rush hour at Café Grumpy in Park Slope when they could easily get their caffeine fix cheaper and quicker across the street at the diner; the Shake Shack types that check the “Shack Cam” to see just how long the line to get a hot dog is; the drunken masses that will pass out in line waiting for a single slice of pizza on MacDougal.

People gladly stand outside of Dominique Ansel Bakery, which promises, “if you arrive prior to 7:00 am on a week day,” your chances of eating their signature Cronut are greatly improved. That means you have to get there around six in the morning just to have a shot at eating a monstrous donut-croissant hybrid. A more adventurous person might say you should just smash the two things together, and save yourself a lot of time, but there are actually lots of people out that just need to get a Cronut that badly.

These things seem alien to me, but in some weird, masochistic way, no matter how much of a pain in the ass the daily grind is, I could probably be convinced that any of those instances make sense; people have their quirks, and I can respect that. There might be some Proustian reaction conjured up in the mind of an East Bay transplant who stands in the lunchtime line at Dos Toros off Union Square because they make the closest thing to a decent burrito in New York; I can appreciate that particular kind of food longing. And although I tell myself it’s probably based in something rooted deep within our psyche to want sweets, I have never been able to understand how to this day, if I walk past the Magnolia on Bleecker in the West Village, there will still almost always be a line, even though the gourmet cupcake trend is dead, has been buried, and is now threatening to come back as some sad zombie.

Yet my inability to fully wrap my head around what drives people to wait for Magnolia cupcakes — which even the bakers have told me time and time again are made from the most basic recipe — isn’t because I’ve been reading about how the cupcake fetish has been on the way out since around the second Bloomberg administration. I don’t understand because, for one year, I was the Magnolia Bakery cupcake bouncer. I stood at the door and told people when they could or couldn’t come in. I’d stand there night after night looking into their eyes, trying to piece together what terrible events led them to stand outside of a bakery at 8:30 on a cold December evening or muggy summer night.

So how does one get to be a cupcake bouncer? I’d like to say that the job that rescued me from making one latte after another at the Union Square Starbucks — the one next to the McDonald’s, with fewer junkies hanging out in front — came to me because I’m friendly and outgoing with the wit of a Dorothy Parker. But my manager, a woman who dressed like she was going to the Renaissance faire literally every single day of the year, god bless her, told me the reason I was qualified to stand by the door to let people in one by one when the lines started — making sure they knew that nobody was allowed more than a dozen cupcakes at a time, and letting the people at the icing station know what was running low (vanilla-vanilla with sprinkles usually went the fastest) — was simply because of one quality I had that none of my other co-workers possessed: “You’re a big guy.”

I was and still am, in fact, a bigger person. I have a beard, and thanks to my Eastern European ancestors, a fair amount of body hair. Put me next to a door in an apron, and people might understand that I’m 220 pounds of Jewish guy standing there to make you stop. But people didn’t always stop, so sometimes I’d have to literally stand in front of the door, using my body to block them from going in. This was what I did for a living when I first moved to New York. This was how I barely paid the bills.

“Sometimes people act like children,” my boss told me the first day she designated me the cupcake bouncer. “So you have to treat them like children.” That was the motto of Magnolia when I worked there. Nobody cared about their job; I was one of the four people I knew who worked there and moved to New York to write. Two co-workers were dancers, and one was a girl from Greenwich who was too frightened to ever go into Brooklyn to drink with us. We hated the customers equally and felt nothing but white-hot rage every time one of them said, “Aren’t you getting so fat working here? I would eat everything!”

We hated the ones who waited in line, and when it was time to close, complained if they didn’t make it in — too bad for them, there was no sympathy. I don’t know what it’s like to work at Magnolia now, but back when it had a single owner whom we hardly ever saw, long before she sold it to a buyer that has been working with franchisees all over the world to open up Magnolias, if you bought a cupcake from Magnolia, there is a high probability that the person behind the counter hated your guts.

I was the first line of defense. Me. I was the gatekeeper and I was the key master. I had to stand there sometimes for up to six hours, making small talk with the Millers from Iowa who couldn’t believe there was a store that just sold condoms a block away from the bakery (RIP condom shop). I had to ignore the guy in the suit who told me the only reason I wasn’t letting people in was because I wanted to feel some sense of power in my “pathetic life.” It was actually because we had run out of cupcakes. Not really my fault. I had to apologize to Lou Reed when he stormed out of the bakery because one of my co-workers put “Sunday Morning” on the stereo when he walked in. (Lou didn’t say anything back to me.) And on that rare occasion when a person took it to the next level, and somehow acted like the worst possible person you could imagine waiting in line to get a cupcake, I was the person that got to say, “Nope.”

I was the first face you saw upon entering, and I was the last one you saw when you were leaving, unless, of course, you were the type of person that ran past me so you could triumphantly hoist your one cupcake that you waited 45 minutes for into the air like it was the Stanley Cup. That happened at least once a night.

I was the guy that lied to you and said members of Sex and the City came in there all the time since at least 50% of the bakery’s nightly business in the early aughts was thanks to a small appearance on the show, and the snowball kept rolling downhill from there. On weekends, busses filled with people on some Sex and the City tour would stop and park outside, let the tourists out to take pictures, then pass out cupcakes that we claimed were from Magnolia, but were actually from one of the bakery’s offshoots, opened by Magnolia’s former owner, and another by her former manager, both who knew about the dozen-per-customer rule. I sometimes wonder how many pictures I’m accidentally in, the guy with the beard in the apron just standing in front of the charming little bakery during a quiet moment before the lines unfurled like angry centipedes.

I wonder what happened to some of my other coworkers, the ones I liked that I can’t find on Facebook; and I wonder what will be the next New York dessert landmark filled with employees that want to be doing something different. And I wonder if somebody I know will convince me, after a couple of drinks, that we should go wait in line for whatever that new trendy dessert is. I wonder if I’ll acquiesce and feel like a sellout for doing it. But most of all, I wonder if there will be somebody waiting to let me in at the door, the next generation dessert bouncer that would rather be doing just about anything else.

Jason Diamond is the associate editor at the Men’s Journal’s website, the former literary editor at Flavorwire, the founder of Vol. 1 Brooklyn, and has had his work published by the New York Times, The Paris Review, Tablet, the New Republic, Vulture, Bookforum, and many other places. He lives in Brooklyn with his wife, two cats, and a dog named Max.

1. We Did Good, Billfold
2. Question Wednesday
3. What I Learned From Five Years of Writing and Editing for The Billfold
4. How a Program Assistant Dealing With a New Paycheck System Does Money
5. Classic Billfold: What I Wanted From My Move to Portland and What I Got
classic billfoldjobs