The Cost of a Thrift-Store Couch 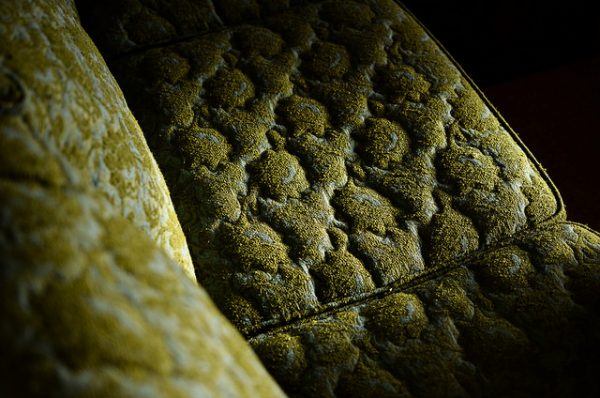 Last October, my boyfriend and I took the plunge and moved in together. We found a cozy and modestly priced one-bedroom apartment in Oakland, equidistant to both of our jobs, with a landlord who seemed kind and accommodating.

My boyfriend was moving across the country from Boston, where he had just finished a master’s program; I was moving from my beloved San Francisco apartment with two other roommates, where none of the large furniture items outside of my bedroom actually belonged to me. We anticipated with dread all of the money we’d be spending to furnish our apartment.

Through a combination of luck and the kindness of others, our wallets weren’t as damaged by the move as expected. When I mentioned to a friend that I needed to rent a truck to move my stuff from my San Francisco apartment to the new Oakland abode, she tossed me the keys to her van and told me I could borrow it for as long as I needed. My mom was in the process of cleaning out my grandparents’ house and said we could take anything we wanted, so we scored a free dresser, six bookcases, two lamps, a chair, and a shelving unit for the kitchen. My aunt gave us a beautiful dining table she had in her garage. We were pretty well set.

All we needed was a couch.

My boyfriend and I are both educators in the Bay Area, so cost was a huge factor for us. I spend most of my waking hours at home lounging in the living room, which meant comfort was also a must. But, as anyone on a budget can attest to, finding a couch that is both comfortable and reasonably priced is a challenge. We went to Ikea, said hello to Nicole’s old couch, and quickly realized that the couches in our price range were uncomfortable and didn’t look particularly durable. We scoured Craigslist ads, but a majority of the couches under $400 were marred with questionable stains or permanent imprints of former owners, and the few that looked decent disappeared before we could get them. We walked into a local furniture store, saw the price tags on a few items near the door, and walked out again. It seemed like our moving luck had run out.

As our morale sunk and we were resigning ourselves to sitting on foldable lawn chairs for the foreseeable future, we stumbled upon an awesome thrift store with a huge selection of furniture. We found a couch that was blissfully comfortable, so large that it fit both of us lying down with room to spare, and it even had wheels, which meant we’d be able to move it around if we had company. Plus, the day we visited they were having a 50 percent off sale for all furniture, bringing the total cost of the couch down to $45. It was nearly perfect.

Except it was really ugly.

It was a light peach color with a dizzying teal and white floral pattern. But, we figured, we were never going to find something this cheap and comfortable again, and we could always buy a couch cover to fix the aesthetic problem. We went to the register and said yes to the couch. The cashier said that the store would deliver it for a $25 fee, which seemed outrageously reasonable, so we said yes to that too.

An hour later, the truck with the couch pulled up and two men started trying to heave the couch up our staircase. My boyfriend pitched in, and after several tries they were able to navigate the stairs and get it settled in the living room. Because it was such a strenuous delivery, we tipped $25, bringing our total costs of the couch for the day to $95.

A week later, we ordered a sofa cover, which was more expensive than expected. The cover cost us $69.99 — more than the couch itself. We also ordered four pillowcases for $20.90. As we waited for everything to arrive I imagined how this was going to transform the couch, and, by extension, our entire apartment. When it came, we quickly discovered that while it did make the couch prettier, the cover would slip and come untucked and the cushions underneath would slide around, making the couch look super messy. My boyfriend didn’t seem to mind, but the couch started driving me to distraction.

I spent hours online searching for tips and tricks to get a couch to cooperate. I finally bought three non-slip rubber underlays to put underneath the cushions, to keep them in place, for $29.85. It didn’t take long to realize that these were ineffective and a total waste of money.

Months passed. I tried to convince my boyfriend that gently lowering oneself onto the couch and then sitting completely still so as not to disrupt anything was normal and fun, but he didn’t buy it. I found myself obsessively tucking and fluffing every time I stood up, as if somebody was lying in wait to judge my rumpled couch.

After more searching, I purchased two types of Velcro — strips and squares — for $12.83. I attached one side of the Velcro to the underside of each cushion and the other to the body of the couch. It worked for a week or two before losing effectiveness. Closer inspection showed that the Velcro adhered well to itself, but didn’t stay stuck to the couch cushions.

My last resort was buying over 100 embroidery pins for $11.98. With grim resolve, I used half the pins to painstakingly attach each cushion to the body of the couch. Using the other half, I pinned the couch cover in place. Although not perfect, I need to count this as a success. The cushions slip around much less than they did before, and while I do need to tuck and neaten the couch cover, I only do it about once a week rather than on a daily basis.

All said and done, our $45 couch ended up costing $238.85. While I know this is still a steal, it’s definitely not what I expected to spend that day in the thrift shop. After obsessing over the couch and pouring so much time and effort into making it look nice, I took a step back to ask myself why it mattered to me so much. I love my job, and my boyfriend loves his too, but because of our professional choices we definitely fall on the lower end of the income spectrum when compared to our friends. Many of them own houses or condos and have homes that look like a two-page spread in the Pottery Barn catalogue. I guess I thought that even though we don’t own our home, even though we don’t have a lot of space, if I could at least make our apartment look beautiful then it would somehow compensate for how inadequate I feel about our living situation. To be clear, my friends are loving and rad and would never make me feel badly about my income or apartment, but I projected my insecurities and anxiety onto them by trying to create a perfect home.

I’m hoping that in 2018 I can focus less on comparing myself and my living situation to others’ and can instead work on building a space for myself and my boyfriend that reflects our lives and personalities. Until then, at least I have a very comfortable couch.

Jenny Staller is a school librarian and longtime Billfold lurker who lives in Oakland, California. She swears she’ll leave the couch alone but makes no promises about the bed.

1. We Did Good, Billfold
2. Question Wednesday
3. What I Learned From Five Years of Writing and Editing for The Billfold
4. How a Program Assistant Dealing With a New Paycheck System Does Money
5. Classic Billfold: What I Wanted From My Move to Portland and What I Got
couchdiyhomemovingmoving seriesthe-cost-of-thingsthrift store