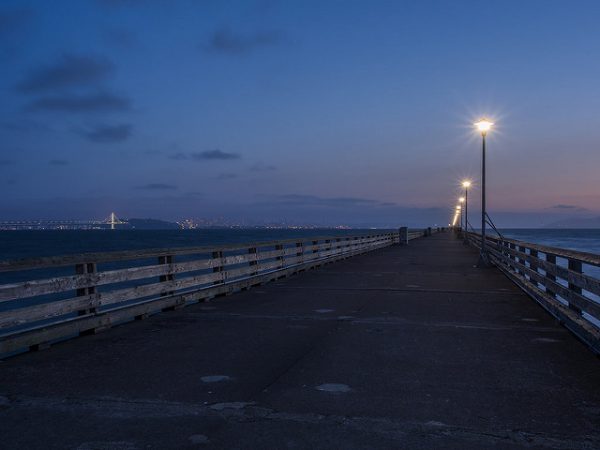 Some years ago I dated a guy who used San Francisco as backdrop to fantasy. He was a fellow East Coast transplant, and after his first year in California posted a photo to Instagram, tagged from Dolores Park; the vista looking outwards, heroically, to the Mission and the glowing bay beyond. “It was a hope, a dream, a mantra ‘to live in San Francisco,’” the post read, “and I can honestly say, one year on, that I can’t imagine myself living anywhere else.”

Of course, he lived in Oakland and his job was in Marin. He only ever went into the city when he needed something obvious and enviable to pose with and post for the rubes back home. The feed was rife with intensely curated bridges, boys, and brunch. In this photo there was also a youthful blonde consultant twined about his ankles as the San Francisco skyline receded into the distance. Every post was like that. The subtext of the entire account was eat shit, Bedford Falls.

The following week he dumped me. I didn’t miss him. We were on different paths. I understand he and the consultant recently got an apartment together.

For San Francisco, the Bay Area, and California writ large, the presumption is that if you were not born here — that if you chose, willingly, to move here from somewhere else — then you arrived with pockets and suitcases stuffed full of dreams. I didn’t. And I’ve always felt a bit embarrassed about that. Things could easily have gone another way. It might have been Chicago, or Minneapolis, or Pocatello, Idaho. For me, Berkeley was just where I was when I gave up looking for something better.

Let me be clear that I have no regrets for how it’s all turned out so far. I’m four blocks from the metro station and 30 minutes on public transit to a world-class city. My home is walking distance to banks, grocery stores, medical facilities, and a top-notch public university. Though it never really gets hot, the Bay Area has roughly 300 days of sunshine a year, which is an exceptional plus when half your work keeps you on a bicycle. Hills we may have, but blizzards and hurricanes we do not.

Professionally, Berkeley is where I’ve been able to cultivate both my education and my career. I have taken courses at UC Berkeley both through certificate programs and by personally appealing to professors, whose indulgence I will be forever grateful for. Thanks to them I received tens of thousands of dollars worth of instruction without the debt, and the connections they gave me contributed to landing work for the local news.

Berkeley has become home. I’ve become comfortable here. It’s where my best prospects and professional contacts are. Despite the expense of the Bay Area, moving someplace with a lower cost of living is no bargain at all if it means setting my career on ice. Even without checking the listings, I can guarantee that there are currently zero job offerings for either journalists or bike messengers in my hometown, an unincorporated area in upstate New York.

But money is always tricky — and, as relatives have asked, if I am so set on staying, then why don’t I try for work that pays more? It’s a good question, and one I have thought much about.

There is a commonly held belief in this country that if you struggle financially then you are largely at fault. You chose to live in the wrong city. To pursue the wrong career. To speak the wrong language. Your trials are the consequence of a lifestyle choice. You have agency over your situation and have decided simply not to change. “Have you tried not being poor?”

I do admit that financially I could do better. Given my skill set, I could make more money working as a full-time editor, or some other professional desk jockey job I might hate. (Consultant, perhaps?) Of course, my skill set might not be enough to land one of those jobs, since I’d be going up against people with far more experience (and actual degrees in the field) for the very few positions available.

But assuming I even got an interview, I am unwilling to barter away any more of my daylight hours if it means I won’t have the time to enjoy where I live. The solution, instead, is to be sensible about how and where I spend my money.

With rare exceptions — underwear, groceries — I only buy second-hand. In the case of groceries, I shop the discount produce section first. I have friends over for dinner, rather than go out to restaurants. I garden to save money. I use the free section of Craigslist aggressively. I have roommates, and even though what I currently pay in rent is the most I have ever had to pay anywhere, it is still significantly lower than the average for the area. Caviar, practically, at canned tuna price.

When it comes to writing, so long as it pays, no job is too small. I’ll write for anyone, and I think about money in a strategic sense. Not in numerics but in goods. An article is not $40 or $200, but a week’s worth of coffee and groceries for the month.

The Bay is expensive, but I can walk, bike, or use public transit to get everywhere I need. Moving someplace with a lower cost of living would be significantly more expensive if it meant I had to buy a car. I hate driving, and I’m terrible at it. So there would be a triple cost involved: in dollars, in mental health, and in safety to fellow motorists.

To sum up, moving would be far costlier than staying put, even if it means staying broke. I would be giving up much too much — home, career, prospects — and saving very little, if anything at all. Whim may have been a good enough reason to move in my younger days, but now a move would have to be towards something and not away from it. When money is a trouble, instead of looking for more of it somewhere else, I limit my necessities so that I can further enjoy the luxuries — among which is the ability to live where I do.

Besides, when it comes to areas of the country that are bikeable, walkable, with reliable public transit, in easy reach of world class museums, parks, and universities, and with an abundance of publishing outlets to further my career as a writer and photographer — and which have a lower cost of living than Berkeley — I’m drawing a complete and utter blank.

Berkeley is not a place I chose with any grand intention. It is the place I stumbled in to that offered me everything I needed, and my feelings for it are identical to the jealous affections a hermit crab feels for its favorite shell. Will I live here forever? Probably not. But for now I don’t need fantasies of a grand elsewhere. I’m already there. And I can honestly say, ten years on, that I can’t imagine myself living anywhere else.

1. We Did Good, Billfold
2. Question Wednesday
3. What I Learned From Five Years of Writing and Editing for The Billfold
4. How a Program Assistant Dealing With a New Paycheck System Does Money
5. Classic Billfold: What I Wanted From My Move to Portland and What I Got
budgetinghomemoving seriesstaying put