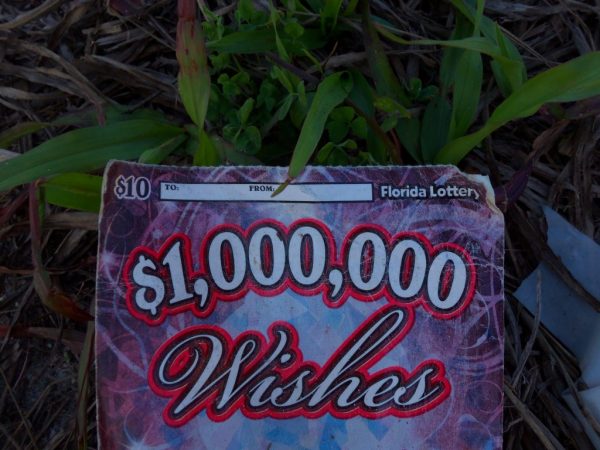 Where was it? I had won $4 on a $3 scratcher lottery ticket, but when I went to the store it to cash it in, it was nowhere to be found. I thought it was in my handbag. Nope. Was it in my briefcase? Nah. How about in the notebook inside my briefcase? Not a chance. Could it be tucked inside of the 1,000-page book I had been reading for the past month? What a crazy idea! I must have left it at home.

When I got home, I went berserk. Where in the hell was it? I searched the bag and briefcase again, the living room floor, and even the cushions of my only chair, but all I found was a 1963 penny. I inspected the books and magazines scattered throughout the living room, kitchen and bedroom. After three hours of frenzied, fruitless searching, I was frustrated and confused. Why was I so upset? I had only won $1, once you subtract the cost of the ticket. I had more than that in my wallet. During the previous week, I had found a scratcher ticket worth $10 on the ground. On the way home from work that day, I found a $1 bill on the sidewalk at the light rail station. Why was I obsessing over $4?

Because I WON it, that’s why. It wasn’t the amount that was important; it was the status. I was a WINNER! I found the previous $11, but finding wasn’t good as winning. Even though I gave up the lottery for Lent, as soon as Lent was over I was lured back to the games. Everyone wants to feel like a winner. That concept created the gambling industry, the beauty pageant industry, most sports, the popularity of Cracker Jacks and game shows, and of course, the Publishers’ Clearing House Sweepstakes.

I took to my bed, like some Victorian lady with the vapors, trying to replay the last 48 hours. I remember scratching out the winning line on the Bingo scratcher. It wasn’t until the next to last number that I got a winning line worth $4. Usually, I put winning tickets in the back of a notebook, so the silvery scratcher residue wouldn’t get all over a purse or book. Why did I deviate from my normal behavior? Did I get distracted and accidentally set the ticket down in an unlikely place? No matter how hard I tried, I couldn’t retrieve the memory that would solve this riddle.

Why are we obsessed about winning? Every day, people fall for irrational scams and schemes, lured by the promise of becoming rich. Who hasn’t received a letter or e-mail proclaiming “YOU HAVE ALREADY WON”? I love winning. Not in a creepy Charlie Sheen kind of way, but in that pleasant feeling of surprise when you gain something unexpected or improbable and it isn’t your birthday or Christmas. It means that you are special. Don’t we all want to feel special sometimes?

When I won a trip to LA, I told everyone that I encountered about it. The smiles and accolades that I received made me feel fantastic. When I won airline tickets to London years ago, I told the ticket agent and was upgraded to business class. I have made trips to stores and visits to websites because they were giving away prizes. I always encourage friends to enter giveaways. If I can win a trip, so can they. Last week, I sent a link to a friend who has always wanted to go to Maui. I’m keeping my fingers crossed for her.

The feeling of winning must cause us to secrete endorphins or stimulate the pleasure centers in our brains. Why else would we go to an auto mall for a test drive even if we weren’t planning to buy a car? Because the auto mall is giving away a weekly prize of $500 to one lucky test driver, that’s why. Why do charities offer $30 raffle tickets for the chance to win a car? Because they know that more people are interested in becoming a winner than they are in donating directly to a charity. In the summertime, state and county fairs rake in the money as fairgoers spend $50 on games of chance to win a stuffed animal worth $5.

When I was a little girl, every day for a week I tried in vain to win a stuffed animal at our annual Fireman’s Carnival. Finally the guy running the game gave me a one-eyed teddy bear for my persistence. But it wasn’t the same. If I really wanted a bear, I would have asked my father to buy a nice one at a store. I was spending my hard-earned allowance to prove to myself that I was a winner. Knowing that I was a pitiful loser that someone felt sorry for after a week did not give me a sense of accomplishment. Before the summer was over, I gave the bear to one of my friends.

After two hours of extensive searching and unintentional organizing, I gave up. The winning scratcher was gone. Maybe one day I’ll find it when I’m not looking for it, just like everyone says is how you find true love. But I just texted a code word to my local radio station for a chance at some concert tickets… I’m gonna win me a bear.

1. We Did Good, Billfold
2. Question Wednesday
3. What I Learned From Five Years of Writing and Editing for The Billfold
4. How a Program Assistant Dealing With a New Paycheck System Does Money
5. Classic Billfold: What I Wanted From My Move to Portland and What I Got
humorlifelotterymoneywinning