Unmooring in a Safe Harbor: What Tana French’s Mystery Novels Tell Us About Money 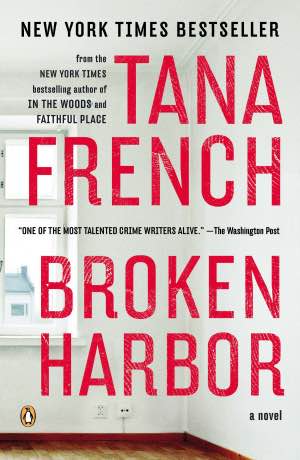 Tana French is a best-selling Irish mystery writer whose works are routinely met with praise for their novelistic treatment of contemporary Dublin. What’s less commented on is how much her novels explore the psychological side of money: not having it, getting it, and losing it after you’ve had it. A detective in 2012’s Broken Harbor puts these concerns succinctly, saying “money: the only thing that kills more people than love.”

Broken Harbor is a cautionary tale about a once-poor country and the stresses of economic revival. Specifically, it’s a novel about the bursting of the Irish property bubble, which followed the collapse of the Celtic Tiger, a 1990s to early 2000s economic boom driven by overseas investment.

I re-read Broken Harbor recently, just as media stories began to focus on retrospectives of the 10-year anniversary of the beginning of the U.S. Great Recession. Many of them found that a sizable percentage of people haven’t yet pulled out of their recession-triggered financial crises. So, although I certainly remembered the novel as focused on the psychological challenges of financial distress, it was almost shocking to realize how much the book is about the same issues that haunt those 10-year retrospectives. In fact, Broken Harbor is the only novel I can think of that deals with the psychological effects of a financial crash and a housing bubble.

It opens with the conventions of the mystery, of course. Patrick Spain and his two children Emma and Jack have been killed, and his wife Jennifer severely wounded, in a housing development near the Irish Sea. The economic concerns are clear from the outset. The housing development once promised seaside McMansions, but is now distinguished by multiple houses standing vacant and vandalized. People who bought during the economic upturn are now unable to pay their mortgages, and building ended abruptly before the development was even half completed.

The detectives focus in early on finances as a possible cause. Pat Spain has been unemployed for some months, and they find a closet with financial records in a box, indicating “the mortgage was three months in arrears and there were two letters from the lender […] the SUV had gone back where it came from […] they were a month behind on the Volvo, four months behind on the credit cards and fifty quid on the electricity.”

The detectives speculate that the financial slippage was starting to stir panic: “You could almost catch the stench of fear, dank as rotting seaweed, coming up from the dark space at the back of the closet where the Spains had kept their monsters [dunning letters from creditors] locked down.”

The Spains’ lifestyle, earn big and spend big, is frequently juxtaposed against an older, poorer Ireland. One detective notes that his childhood had been marked by vacations in a local seaside campground and fears that owning more than two pairs of shoes might leave you out on the street, while contemporary children expect the Costa del Sol and unlimited Nikes. French’s text calls up references to an Irish past even further back: the windows of the vacant and unfinished houses seem to stare at inhabited ones “like famine animals.”

But the book also hints that, for all the drawbacks of the older, poorer Ireland, the community was not fractured by the desire for wealth. Now, there are fissures everywhere about money and its display.

The Spains were once part of a close-knit group of people their age in Dublin, but the Celtic Tiger has split the group into the haves and the less-haves. As Jenny Spain’s sister recounts to the detectives, two of their friends wanted to be “rich guys about town […] they started going to all the supertrendy places […] Ian would be telling you how much he paid for every single thing he was wearing.” Another friend “had got engaged […] all we knew was he was loaded—and she would die of embarrassment if her fiancé ever saw her with someone like me.”

“Someone like me” means a photographer, a relatively low-paying gig in a world where all her friends want to work for investment banks and property brokers. Jennifer’s sister can’t afford highlighted hair, fake tans, or expensive vacations, and her old friends notice. So does the broader society. “Everything in the papers,” she tells the detectives, “in magazines, on the news […] it was like you were a moron, or a freak, if you just wanted to be comfortable and do stuff you love. You weren’t supposed to be thinking about that; you were only supposed to be thinking about getting rich and buying property.”

Pat and Jenny Spain obey those dictates, buying property in the firm belief that its value can only go up. As they gradually lose a financial foothold, they lose these and other friends, because any get-togethers are often based on activities they can no longer afford. In the end, one of the detectives observes they are almost completely cut off, even fearing the expense that calling on a mobile phone costs.

Even so, though, the more immediate cause of the crime is a fracture of mental stability. Gradually, Pat becomes convinced that there’s an animal boring into the house and damaging it at night — and what the detectives assume are clues to his murder are actually the traps he laid to catch it, holes he drilled in the walls to unearth the lair, and baby monitors positioned to catch it in the act. Pat also leaves behind multiple online forum threads in which he frantically asks for help, because no one has ever heard the animal scratching but him.

The animal is clearly a psychological projection of the stresses of financial insecurity. But Pat Spain’s contribution to the unraveling of his home and family is his belief in the power of money — itself, obviously, a type of imaginary beast.

Shortly before the murders, Pat tells his wife, Jenny: “I know you don’t deserve to live like this. You deserve all the fancy clothes and expensive curtains in the world. Emma deserves dance lessons. Jack deserves tickets to Man U. And it’s been killing me that I can’t give you that stuff.” He adds “I finally figured out what [the beast] wants. It wants me. The kids too, and you, it wants all of us, but most of all it wants me.”

Jenny responds with a dose of reality: “There’s nothing there. There never was anything there.” Moreover, she adds: “I tried to tell him it wasn’t about money, money didn’t even matter anymore.”

But reality doesn’t carry the day because their children have begun to believe in the beast. Worse – and this is the impetus for Jenny’s final unraveling – they have begun to tell the outside world about the beast, even though she’s told them it’s not real, and thus not to mention it. The son, Jack, talks to a shop clerk about his plans to be “Daddy’s big animal” for Halloween. The daughter, Emma, draws a picture of it for a school project.

Jenny has felt secure at least — harbored — in the belief that the outside world was unaware of the family’s troubles. She lived a performative reality: as long as she and the children can appear normal, the world will take them as such — even as her husband spends more and more time destroying the physical structure of their home to find an animal that doesn’t exist.

But once the children begin to talk in shops and schools about the beast, the psychological fracture, at least, has attained a public reality. Jenny Spain snaps and tries to “get us all out” of the house, killing her family and attempting to kill herself.

French has said of the social environment surrounding the book “[politicians were] frantically urging my generation to spend ten times our income on unbuilt houses in the middle of nowhere. Our then-Prime Minister said, charmingly, that anyone who didn’t believe the property boom could last forever should kill themselves.”

But as germane to headlines as Broken Harbor is, the book has deeper philosophical concerns as well. French herself is a former actress, and I think she is analyzing issues of representation, and how we tell as a culture what is real and what is false.

Despite a widespread perception that economics and cultural forms like plays and stories are far apart, there are ways in which their concerns are similar. Spending via debt, for example, is about materializing a physical object that’s not really there… because on a ledger, it isn’t an actual thing, but a money deficit. It’s an absence.

In graduate school, I read Michelle Burnham’s Folded Selves: Colonial New England Writing in the World System, a book on economic relations in early America. She argues that early New Englanders became socially anxious about the introduction of paper money, because it was, in some sense, felt to be a potentially false representation of the worth that purportedly backed it.

Burnham draws a direct line between these anxieties and the Salem witch trials. Those hinged around a panic that people could look like your neighbors but actually be the devil. In other words, everything you saw might be a false representation — and one leading you to ruin.

I can’t help but think that property bubbles and financial panics are part of the reason that popular culture — especially around this time of year — is increasingly made up of horror movies in which unreal things materialize and the seemingly real is often revealed to be false. We’re trying to work through what’s real and what’s false. Spooky money, indeed.

1. We Did Good, Billfold
2. Question Wednesday
3. What I Learned From Five Years of Writing and Editing for The Billfold
4. How a Program Assistant Dealing With a New Paycheck System Does Money
5. Classic Billfold: What I Wanted From My Move to Portland and What I Got
book reviewsbooksspooky moneytana french