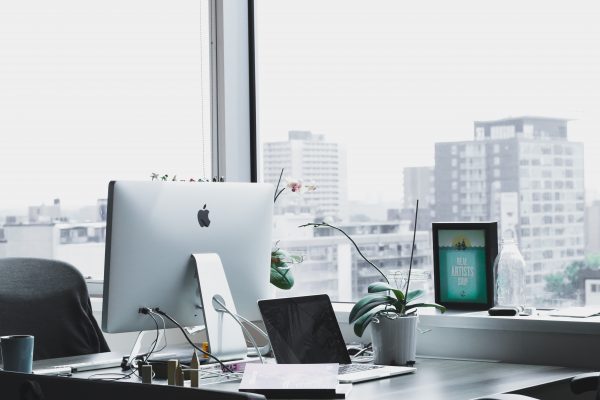 I didn’t expect to land a six-figure job offer. I had just given notice at my current organization to ramp up my freelancing business. I had a plan — I was going to work part-time at a less stressful hourly job to help with cash flow and pour myself into my writing career. I had recently started doing some freelance work for an agency and was buoyed by the coup and my determination to work for myself.

I even pitched my story of transitioning from a traditional 9-5 job with benefits to a full-time freelance writing career to Nicole here at The Billfold. I intended to talk about how I was swinging this transition with a minimal (and highly inadvisable) cash reserve. I was confident that with hard work accompanied by a consistent, hourly part-time job, I could cobble together a living that would cover my expenses, which really are minimal. I would suspend all retirement contributions and forget about saving for the unknown future and work now to create the future I had always contemplated.

The day before I gave notice of my resignation, a recruiter I had been working with connected me with a hiring manager looking to hire someone quickly. I didn’t expect anything to come of it; I had been hearing about job opportunities from this recruiter for nearly two years, after all. I had also applied to and been rejected from 39 jobs at this particular organization over the years. I had been told that I was a less desirable candidate because I lacked a security clearance — oh, and by the way, jobs in this particular field are almost always filled by internal candidates. As an external applicant, I had a pretty slim shot at employment, unless I was willing to take a step back in title.

In spite of all these reasons to believe I was just accepting the invitation to interview to maintain my relationship with the recruiter (and to be open-minded about my career prospects), this time was different. Things moved quickly. One week after I gave notice at my job, I attended a panel interview and was given promising feedback from my contact the following morning. A couple days later, I received an offer of a senior title and a starting salary in the six figures, a 47-percent bump from my current salary. Including stock options and benefits such as a year-end bonus, I was looking at a significant offer. The most valuable of which was the title — it would be two levels above my previous position.

I was stunned, grateful, excited, and overwhelmed. I also felt disappointed that I would have to delay my dreams of writing freelance full-time. However, I couldn’t say no; this was the career bump I had been chasing after for four years (I had come close multiple times) and after five years of earning a stagnant wage with raises well below the average cost-of-living adjustment, the door was finally open. I immediately asked how much time I had to respond to the offer and contemplated my negotiation strategy. Soon after, I initiated a diplomatic and open-ended conversation about compensation. Less than an hour later, I received an updated offer of 8 percent more than what was initially on the table. When the recruiter mentioned that it was an easy ask, I couldn’t help but wonder if I could have been more aggressive in my approach. I took note of this experience for future negotiations and accepted.

The following thought that came to me was: “I guess I’m wealthy? Weird.” Granted, “six figures” carries a different meaning and has a very different value than it did in decades past, but still, according to the U.S. Census Bureau, I’m among the top five percent of female earners in the country.

Mentally, it’s disorienting to absorb and adapt to this drastic change in my financial situation. I’ve written about growing up in a low-income household and leveraging my very scrappy and frugal habits to dig myself out of student loan debt, build my net worth, and grow the gap between financial insecurity and a more solid financial footing — a moving target depending on how I defined “solid” in the moment. To achieve this endeavor, I typically employed two strategies: spend less money and take on side hustles. I equated all extra income with a specific and essential expense in my life. An extra fifty bucks was a week’s worth of groceries. One hundred dollars paid for one month’s worth of healthcare premiums.

The same day I received my written offer, I finally received my written offer from the low-paying hourly job I planned on working at part-time. The extra income would address every monthly expense aside from my mortgage payment. The pay? Minimum wage. My first instinct was to see if I could accommodate this time-intensive side hustle. After running some calculations, I was finally smacked with the realization that taking on a minimum wage part-time job might not be the best use of my time. I could instead use that time to work harder at my main hustle and go after the raises and bonuses reserved for top performers at the company. Working hard at my day job could amount to a substantial salary increase and bonus amounting to 10 percent of my annual salary. This increase would far exceed any minimum wage job, full-time or otherwise, I could take on. While I’m no stranger to optimizing my resources and having trouble turning down any opportunity to make money, I am not used to budgeting my time strategically. I suppose this could be the biggest mental hurdle people work through when shifting to more demanding and higher paying positions.

Unlike the difficulty I’m experiencing computing how these new numbers translate to my day-to-day life, I’m not new to this feeling of self-doubt and questioning my place in new social and professional circles. I have no pedigree. I am a daughter of immigrants; I myself have migrated from a more casual and relaxed city to my new home on the east coast. In all my pursuits  — be they academic or professional — I always felt like I was out of league and felt pressure to change. So I made the easy outside-facing, superficial changes. I traded in my carefree beachy waves and sexy peep-toe slingback heels to a more polished haircut and sensible pumps in an effort to be taken more seriously. I also updated my wardrobe. I wore blazers and carried a designer bag to work and faked it ‘till I was literally cut from the same piece of cloth as my boarding school graduate peers.

At my interview, I dug deep and channeled self-assurance that wasn’t fully realized to summarize my years of experience and to find a personal connection with each interviewer. After the interview, I spent some time writing thoughtful emails to each interviewer with details that reflected my active listening skills. Still, I felt a little nervous. In that moment I realized how dangerous it is to succumb to imposter syndrome because these slivers of doubt beget negative self-talk, which ultimately has the power to yield self-fulfilling outcomes. Thoughts like, “Why me? Why am I seen as a valuable addition?” were internalized, distracting my efforts to focus at my current job. Still, I was stuck on the words “valuable addition.” “Addition” implies that I am another one like them and I’m accepted into the fold. Me. A person who is often mistaken for a dog walker in the building in which she owns both an apartment and the dog in question.

Surprisingly, my contact passed along the fact that the hiring manager had no desire to interview other candidates and would do what it takes to get me to “an easy ‘yes.'” Other thoughts followed, “Could I have been accepted just because I spent some money on expensive clothes cut from fabric made of natural fibers, and then tailored to fit and flatter my personal measurements?” It’s possible. I also had a firm handshake, smiled, nodded, found opportunities to call people by their names, and made eye-contact. “Did I put them at ease when I made them laugh?” You know, all the social skills Dale Carnegie details in his famous book How to Make Friends and Influence People.

None of these thoughts are based on fact, but this I know for sure — my work days will be longer, my output will be considerably higher, and I will have to justify my new salary and prove my value to the organization. I’m anxious about meeting the expectations my new employer has of me and fitting in with the new team. Still, my rational mind insists that the only question I should be exploring isn’t an internal one, but an external-facing one — what even do my colleagues do on a day-to-day basis and how do I learn to do as they do, one task at a time?

Michelle Song does things including writing, editing, and nurturing a Meyer lemon tree. She is an older Millennial unlikely to be found anywhere but her inbox at michellesong101@gmail.com.

Photo by Alesia Kazantceva on Unsplash.

1. We Did Good, Billfold
2. Question Wednesday
3. What I Learned From Five Years of Writing and Editing for The Billfold
4. How a Program Assistant Dealing With a New Paycheck System Does Money
5. Classic Billfold: What I Wanted From My Move to Portland and What I Got
careerslife-lessons