Trading One Experience for Another 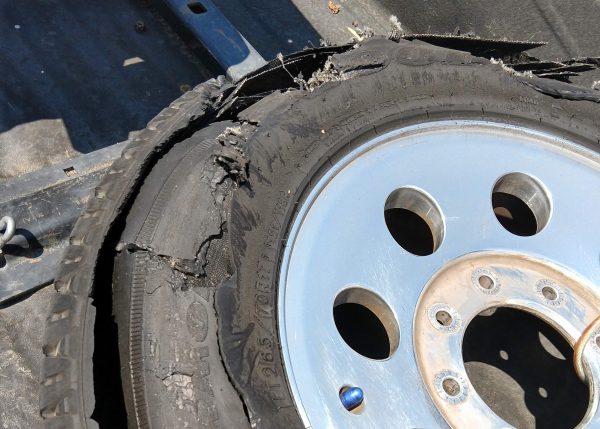 It started with an unusual noise, which you never want to hear at 65 miles per hour, and ended with a blown-out tire and my entire vacation sitting beside the road. Far from anyone or anywhere, and on one of the deadlier stretches of highway between Arizona and California. It was quite an experience. Everyone is familiar with the concept of trading one thing for another. Here is how I traded one experience for another and found myself in the breakdown lane.

About seven years ago, I convinced my wife that camping was fun and she would love it. All it took was a living room, heating/cooling, a shower, and a walk-around bed to camp in — that is to say, an RV — to get her to sign on. It also took a bit of diligence. We’d both had car payments simultaneously for the first time ever and these two vehicles were just about paid off. We decided to continue making the car payments, but this time we’d put the money directly into our savings account.

This payment plan worked out great and two years later we bought a 31-foot fifth wheel camper trailer. Old, huge, and heavy did not matter; it was ours and it was paid for, free and clear. Now, we could set out adventuring and camping in all kinds of new corners of our great state of Arizona.

In Arizona, we are blessed by geography and some truly quirky places to visit. We are also cursed by heat. Heat that destroys tires and strands motorists on every road, every day. I was hoping to not to be one of those people. My father-in-law is a retired Teamster and I had heard many times about the gospel of Michelin tires. There is a reason why the 18-wheeler tire market is dominated by Michelin; they are near indestructible and can take the abuse. One of the first things I did after we bought our fifth wheel was put Michelins on it. There was no way that I wanted 12,000 pounds of trailer getting loose behind me, nor did I ever want to have to change one of those big boy tires.

Did I mention that owning a fifth wheel also means owning a heavy-duty truck? Did I mention that said heavy-duty truck requires heavy-duty tires to pull, and support, a fifth wheel? It just so happened that the truck I bought had nearly new Dunlop tires on all four corners. All of them rated at the “E” load range, which basically means each tire can support over 3,000 lbs of weight by itself. Having just spent all of this money on a fifth wheel, I now had to be a little cautious with our money and our trips. We resolved that we would only do some small, local trips at first, to get the hang of this kind of camping.

This was an exciting time, no doubt. Lots of plans. Lots of places. Lots of new experiences. Then, one Friday while loading up for a camping trip, I noticed that the truck’s rear tire (driver’s side) had this huge bulge in it. Found out that’s called a sidewall bubble. That means that your tire failed from the inside, from any number of maladies. “Time for Michelins!” I cried, all the way to the tire store.

No Michelins at the tire store, the biggest and baddest tire store in all of Arizona. Me: “But I have a trip planned for this weekend!” Tire store employee: “I’ve got some Goodyears in stock that will work, they have the same ratings and everything you’ll ever need.” Well, Goodyear is a major brand, and the camping that my significant other now loves wouldn’t have to be canceled. Sold! I replaced the truck’s rear tires that day — and then I returned the following week and replaced the front two.

Years go by. So many years go by that it’s time to replace the Michelins on the fifth wheel. This is a $1,000 expenditure, by the way. It gets done. Annual vacation comes around again and it’s my turn to pick the location. I pick Temecula, California, which is advertised as San Diego’s wine region. I’m not going for wine, though; I’m going for the countryside, which is just gorgeous.

It’s going to be a summer trip because the last time we visited Temecula, it was a bit on the cold side for our tastes. July it is, then! It’s also what I consider a “flat land” trip. No major mountain roads to climb, so we should be fine in the heat. When you drive a truck and a trailer, you are always worried about temperatures, i.e. oil, coolant and transmission. I wasn’t too worried about the tires, this time around; I only had about three years and 30,000 miles on the Goodyears I willingly signed up for, and the trailer tires were brand-new Michelins.

Eighty miles into our journey, I hear that unusual noise. One glance in my side mirror shows some black golf-ball-size things bouncing away from the trailer. We pull off. We’re on the Interstate 10 highway between Arizona and California, about 20 miles east of Quartzsite. Temperature says it is 112 degrees outside. Jumping out of the truck, I race back to the trailer to see the damage. I walk right past the entirely shredded Goodyear on the truck, thinking one of the new Michelins had failed.

This is a brutal stretch of I-10. It gets tons of 18-wheeler traffic due to all of the goods being shipped between Los Angeles and Phoenix. I also know a lot about this stretch because of an alert I get sent to my phone that notifies me of every big highway closure or delay. Most of the alerts I get sent about this stretch of highway are fatalities. Tired truckers and a featureless landscape make bad things happen out here. That and tires. Blown-out tires that strand people beside the road, making them sitting ducks for 18-wheel trucks.

I managed to change that blown-out tire. After placing the warning triangles behind us. After unhooking the fifth wheel. After instructing the wife to watch for killer trucks. After emptying half the truck to get to the bottle jack and tool that drops the spare. I got it done in just around 45 minutes, and I’m not sure I could have done it all much differently to save some time, reduce the risk, etc. By the time I climbed back in the truck to pull away, one look in the mirror revealed my face and head to be same color as a red popsicle.

I suppose I’ll have to cherish this experience, because I made all of the decisions that led up to it. I traded the possible cancellation of one small weekend trip three years ago for this absolutely frightful hour beside a bad highway in the wrong weather, with only myself to blame. Now fluent in the gospel of Michelin tires, I preach it when I can.

Scott Kersey is a software developer residing in Phoenix, Arizona. In the past, he has been called null certified, nerd qualified, coffee tested and mildly pedantic.

1. We Did Good, Billfold
2. Question Wednesday
3. What I Learned From Five Years of Writing and Editing for The Billfold
4. How a Program Assistant Dealing With a New Paycheck System Does Money
5. Classic Billfold: What I Wanted From My Move to Portland and What I Got
campingcarsexperience seriestirestravelvacation