The Cost of Taking a Family Vacation Via Train 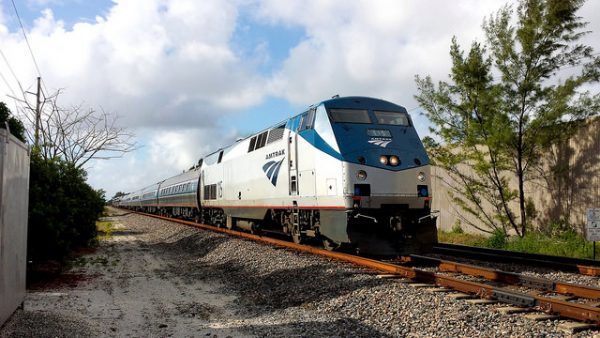 Last spring, after an unusually stressful year at work, I told my husband that I needed something to look forward to or else I was going to lose my mind. There is nothing I like to look forward to more than travel, so we decided it was time for a family trip.

It had been nearly five years since we’d done a big trip; the last time was a nightmare of missed naps and blown-out diapers, but my kids were now 6 and 9 years old, the age where travel starts to be fun. We’d gotten passports after the last election, so we were ready to go big. As a family we debated the merits of different locations: Amsterdam? Washington, DC? New York City? Dublin? Montreal? With a budget of about $5,000, we had some great options to consider. I was on Team Dublin, despite some concerns about the logistics of long international layovers with kids in tow, until my husband wisely suggested we figure out how to make getting to our destination a part of the fun of the trip and not just something to be suffered through.

This decision to embrace the cliché and enjoy the journey ended up being one of the best (and most expensive) parts of our 10-day train trip from Minnesota to Toronto and Montreal.

As I began to plan our trip, I quickly realized that I’d have to make the same decision, over and over again: do we try to save money, or do we pay for comfort? In almost every circumstance, I opted for comfort. This is a pretty significant change for someone who grew up poor and was so broke in my 20s that travel usually involved hostels, couchsurfing, or the cheapest hotel where I didn’t have to worry too much about getting stabbed in my sleep. Now, I was happy to pay extra for a sleeping car rather than try to figure out how to get kids to sleep in the coach section of the train. Round-trip tickets with sleeping cars for a family of four cost $2,191. We could have flown directly to Toronto for about $1,200 or bought coach train tickets for around $1,500, but the sleeping cars were a hit with the kids and made it possible for us to get to our VRBO condo in Toronto ($1,100 for five nights) feeling rested and ready to explore the city.

Our condo was in a great downtown location that was surprisingly kid friendly. I pre-purchased a City Pass ($275) which gave us admissions into five tourist locations, including the CN Tower. The CN Tower overlooks the Blue Jays stadium; while we were looking down, we saw there was a home game about to start and made an impromptu decision to get tickets ($110 for four tickets). It turns out that my daughter is really only into baseball for the snacks ($78 for popcorn, nachos, drinks, and hot dogs), so she and I left early and hit the grocery store to stock up on breakfast and lunch provisions for the week ($125). While the condo was actually comparable in cost to hotel options, having a full kitchen totally saved us money as we were able to limit our restaurant meals to once a day. In fact, it turns out that having kids is a decent way to save on the cost of eating out in a new city. My kids aren’t in the “fancy restaurant” stage of their lives, so dinners out were casual poutine and hamburger affairs — which is probably a horrifying thought to my foodie friends, but I don’t think we had a single meal that cost over $50. No doubt we missed out on some innovative or exciting cuisine in Toronto, but traveling with kids can definitely change your travel priorities. This was especially true when we left Toronto and headed to Montreal via Canada Rail (round-trip tickets for a family of four for about $550 US dollars).

I’ve visited Montreal before with a friend, and we happily spent most of our time wandering the city by foot or bike, checking out the architecture and stopping for coffee and pastries. Though my husband was up for looking at cool buildings and aimless city wandering, the kids had about a 4.5 second attention span for that. Montreal with kids meant paying a bit extra for a condo with a roof-top pool ($700 for three nights) and shelling out $120 for three four-hour passes to Voiles en Voiles, a pirate-themed high ropes course my son described as “epic.” Our condo was in Old Montreal, which was in walking distance of Chinatown, the surprise food hit of the trip. As a parent, it’s really exciting to see your kid realize that the world is a bigger and more interesting place than they could have imagined. For me, watching my son chow down on sweet and sour fish for the first time, while practicing saying “bonjour!” and chatting with our Chinese Canadian waiter about Premier League soccer, was one of those moments. Montreal isn’t as overtly kid-friendly as Toronto, but was still easy to navigate by subway and bus and was worth the brief stop-over.

In the end, we were a bit over our $5,000 budget, after factoring in souvenirs ($187), subway tolls ($48), a rainy day Uber trip to the train station ($17), and multiple trips to Tim Hortons ($39). Though it will take us a while to build our travel fund back up, I’m already dreaming about the next international trip we make with the kids. If we can afford it, I’m convinced that travel is one of the best gifts we can give them. Next stop? Amsterdam.

Wendy Robinson is a community college vice-president who enjoys poutine and Twitter. You can find her there @wendyrmonkey. She is currently brushing up her Dutch.

1. We Did Good, Billfold
2. Question Wednesday
3. What I Learned From Five Years of Writing and Editing for The Billfold
4. How a Program Assistant Dealing With a New Paycheck System Does Money
5. Classic Billfold: What I Wanted From My Move to Portland and What I Got
experience seriesfamilyparentingtrainstravelvacation