Dress for the Job You Have 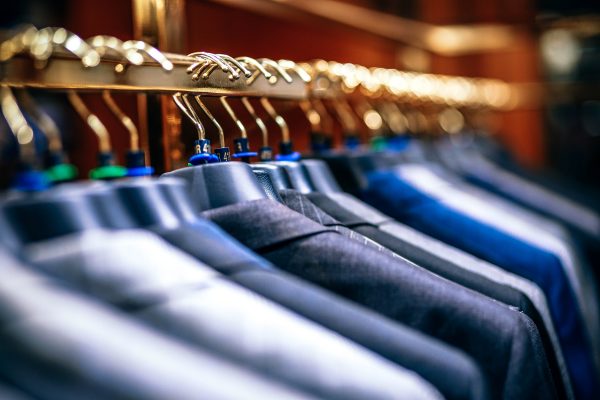 Photo by Fancycrave on Unsplash.

I hadn’t intended to drop so much cash at once. In fact, as the salesman was ringing everything up, I initially thought to myself, wow, I got a pretty good deal. Shirts, pants, belts, socks, even some of those fancy cedar hangers, all accoutrements to accent the new suits I was buying. It was supposed to be the most efficient and economical two-for-one sartorial upgrade I’d ever undertaken.

But as the heap on the countertop kept growing, the digital price display kept mounting, until it reached a truly eye-popping sum for a guy who’d recently depleted his cash reserves finishing grad school. The final amount would be the apotheosis of my mid-twenties credit card spending — and it would mark my transition from the casual wardrobes of grad school and summer camp into the sobering reality of the modern American office workplace.

The summer started with a couple of temp jobs. I had completed two years of graduate school in June, mostly convinced I had made the right decision to forego the PhD route and accept a master’s degree in an esoteric mish-mash of unemployable disciplines instead. It seemed appropriate to hold on to my student job at the library for the summer, even if they could only employ me half-time. The job would keep me stably housed in my university-owned apartment until September, when I’d have to relinquish the job and the apartment back to the campus bureaucracy from whence they came. I would have at least three months to figure out what was next in life, whether it was to stay in Chicago or depart for horizons west.

It was fortuitous, then, that my friend Steph sent me a Facebook message just a few days before graduation, asking if I was interested in a temp job at her office. She warned me it was only part-time and would end after ten weeks, but to my ears, two part-time jobs equaled full-time wages. And so it was that, for the first time in four years, I voluntarily forewent the timeless grace-filled leisure of summer camp counseling in order to work two office jobs.

I alternated days between my temp job and the university library. The latter was in my neighborhood, just a short bike ride away. The former was near O’Hare and took approximately thirty years to reach by car, although I had the pleasure of joining Steph and her husband Nate for a makeshift carpool. My days at the library were about as casual as could be: stowed away in a windowless basement with no public to interact with, I could’ve worn lederhosen and a tube top every day without much fanfare. As it was, I stuck mostly to college hoodies, camp T-shirts, and the requisite Chacos. But the office was different: it demanded a modicum of professionalism, and the standard by which menswear seemed to be measured was belts. If I wore a shirt that could plausibly be tucked in with a visible belt, I passed muster. Not that anyone was policing my outfit per se, but guidelines ostensibly existed somewhere, possibly in the employee handbook I never got around to reading.

The weeks passed and I got by, mostly with a combination of old high school dress shirts and a few Eddie Bauer polos. When late July rolled around, I found myself sitting in my boss’s cube, receiving an offer to stay on full-time starting in mid-August. Once I settled into that new full-time routine, complete with a new Blue Line-adjacent apartment on the northwest side of the city, I finally saw the poverty of my professional wardrobe. Drastic measures had to be taken, and I had a feeling they would cost me big bucks.

Like any respectable Enneagram Five, I spent weeks doing research before taking action. I’d never liked shopping for clothes, and they’re still one of my least-favorite things on which to spend money. But I was convinced that I had to make a change, to dress for the job that had suddenly fallen into my lap. In the course of my research, I discovered that a well-known men’s retailer was having a two-for-one suit sale at all their Chicago locations the following weekend. I enlisted my friend Nate, driver of our summer carpool, to join me for moral reinforcement. On a sunny, warm Saturday in October, Nate drove us down toward the Loop to meet with sartorial destiny.

Immediately upon entering the weirdly empty store, I was accosted by a friendly, sweaty sales associate. I informed him that I was here to upgrade my wardrobe from “camp chic to office bleak,” or some such ridiculous pun, and he cheerfully whisked us to the back to take in the vast walls of suit jackets and pants. After some hemming (there’s the pun), I settled on a subtle blue-gray number that would complement a few of my existing dress shirts. Then, just for fun, I decided that my “free suit” would be a tuxedo. It seemed useful, since I perform occasionally as a gig musician. The suits were measured and marked for the tailor. That’s when the show really got started.

We were moved over to the counter where four shirt-and-tie sets were already arrayed, waiting for my approval. I was a bit taken aback: after all, I’d come in for suits and made my choices. What exactly was this bit about? I flashed an uncertain look at Nate, but the salesman continued laying out belts, socks, and multiple pairs of shoes. The man was on a mission to not just sell me a suit, but an ensemble. Two, actually. Or perhaps four. It’s two-for-one, after all, so why not really go for it, you know?

I felt an inordinate amount of pressure to say yes. The salesman seemed to think these purchases were basically a foregone conclusion; it was just a matter of taste at this point. Hesitantly, I assented to two shirts and ties, but when it came to shoes, I had to push back. “I don’t really need new shoes…” I mumbled, to which the salesman rejoined, “Well you need shoes to match your suit! You can’t wear brown with these; you gotta go maroon.” He had at least correctly assumed that I was not the type of person who owned maroon-colored shoes.

This sales pitch was not part of my Enneagram Five plan. I had already decided what I would purchase and I was going to stick resolutely to the plan. The salesman sensed my hesitation. “I’m just trying to help you look good, man,” he said, suddenly jumping into a thicker Italian-American patois for no clear reason. “Besides, you know, you’d really be helping me out too. You get a nice new suit and tie and shoes, you look sharp for the ladies, and hey, my kids get to eat. It’s a win-win.” This gambit I had not expected. Now it wasn’t just about the shoes anymore, or even about my professional wardrobe. It was about feeding hungry children who would look up soulfully from their empty dinner plates at their father that evening. He would have to confront his family, and say “If only I could’ve sold one more pair of maroon shoes! Alas, O Fortune!”

I said no to the shoes. But I did compromise by buying some of those cedar suit hangers, with their beguilingly rich earthy smell. (What can I say, those kids had to eat somehow.) In the end, I ran up a total just north of $900. I nearly balked then and there, but my polite Midwestern rigidity wouldn’t allow me to go back on the purchase now. Nate encouraged me to see it as an investment in the job. Even in the uncertainty of my medium- and long-term career prospects, even as I mourned the end of my camp counseling days and the casual wardrobe that came with them, I knew he was right. You dress for the job you have, after all. I closed my eyes and handed over my credit card.

Peter Severson is a writer and public policy advocate in Colorado. When he’s not at work, he’s often playing tennis, practicing on a musical instrument, and attending his friends’ weddings.

1. We Did Good, Billfold
2. Question Wednesday
3. What I Learned From Five Years of Writing and Editing for The Billfold
4. How a Program Assistant Dealing With a New Paycheck System Does Money
5. Classic Billfold: What I Wanted From My Move to Portland and What I Got
careersclothingclothing seriesjobsshopping