The Cost of Sewing Nearly All of My Clothes 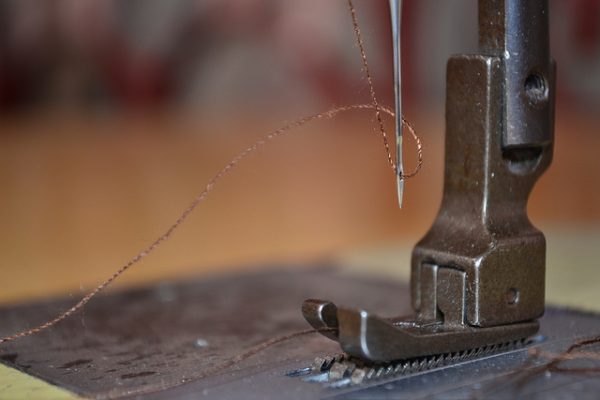 In 2017, I spent $1,290.85 and 341.75 hours on sewing. Those numbers need a few caveats, though — the dollars spent don’t reflect whether I spent actual money from my bank account or used gift cards, and I didn’t separate out the money my boyfriend paid for fabric that I used on his pants and button-up shirts. The hours tallied don’t include shopping, pre-washing the fabric, researching sewing patterns, mending existing garments, or, ahem, spreadsheeting. Instead, I spent those 341.75 hours prepping patterns, ironing, cutting fabric, ironing some more, sewing, fitting, unpicking, sewing again, and a good final press. This hobby is a little like work — but with God as my witness, no one shall ever seen my buttcrack when I bend over in jeans again!

The concept of “saving money on clothing” is a little abstract to me; I’ve never had a clothing budget, since my income is mainly freelance and I work from home. I also teach part-time in casual, progressive environments with dress codes that are more about protecting children’s gender expression and right to learn than policing hems, which is pretty fantastic. Prior to taking up my needle and thread, I probably spent a few hundred dollars a year on clothes, since I relied mainly on thrift shops, chain stores, and neighborhood swaps. Sometimes my eyes cross a little when I see how much money and time I spend on clothes now.

My personal style is somewhere between Katharine Hepburn, Dr. Sattler, and Sue Perkins — I like my pants high and wide, my blazers slouchy, and my shirts buttoned anywhere from chest to chin. A search for equivalent pieces on Everlane (a company that tries to avoid fast fashion pitfalls like unsustainability and the cost to the garment workers’ safety and quality of life) shows jeans around $80, blouses and camis for $70, and tees around $35. Was I spending $35 on tees before I started to sew? Nope. I was buying them for $8 at Target or Old Navy, to pair with my $19 jeans or $7 thrift shop maxi skirts. However, the longer I sew, the higher my standards get — both for my personal performance (“this topstitching is too wobbly!”) and for sustainable, humane fabric production. And that means $$$.

I started sewing because I was a fussy dresser. As I continued sewing, I decided I wanted to sew ethically. Whether I’m choosing fabric or buying the occasional ready-to-wear piece — which I’ve limited to socks and underwear for the last few years — I feel obligated to research and buy responsibly. When I fail at that I feel guilty, which is a lot of pressure to put on an otherwise relaxing pastime.

Recently I started trying to offset my guilt by prioritizing bigger purchases first. This makes the second-highest cost of my hobby the fabric. Independent fabric stores, usually small (and often woman-owned), can offer more information about a fabric’s production and supply chain than most major retailers. The price usually reflects this. So, when sewing a garment I intend to wear at least a hundred times, I whisper “amortize,” buy the yardage, and cut very very carefully.

The highest cost of sewing, is, by far, the time. I’m a contract illustrator, which means I’m usually paid by the hour. If I had hustled up work for even a third of the hours I spent sewing last year, I’d have thousands more dollars in my bank account — which I could have spent, if I wanted, on clothes.

But to me, sewing is worth it. I’m happier, with a healthier body image, more confidence, and growing skills. If you’re considering sewing, I shake you warmly by the hand. There’s a thriving online community; I recommend the Sewcialists, who are actively recruiting diverse voices. While there’s a superabundance of thirty-something white women like me who sew, there are also people of different races and ages, those who sew post-mastectomy or to find pants that look good while sitting in a wheelchair, or sew to affirm a gender identity that ready-to-wear clothing can’t satisfy. One of the most valuable takeaways from sewing (besides jeans which, I can’t emphasize this enough, cover my whole butt) is trying on something that doesn’t fit and automatically thinking “this shirt/dress/jacket is wrong in these ways” instead of “my body is too big/small/shaped wrong.” I think that’s worth a good fraction of the hundreds of dollars I’ve spent, as well as the opportunity cost of my time and labor, over the years.

So far in 2018 I’ve spent $606.82 on materials ($218.99 of that from gift cards), and 115 hours sewing. I’m lucky to have the flexible schedule, space, generous family and friends (see gift cards, above), physical health, and access to information that allows me to sew. Plus, I think it’s fun! Everyone’s clothes are handmade, after all; I really enjoy that my clothes are made with mine!

Lia Marcoux is a children’s illustrator living in Somerville, MA, and she’s aware that some people sew their underpinnings, too. She’s considering buying a T-shirt from Lou & Grey.

1. We Did Good, Billfold
2. Question Wednesday
3. What I Learned From Five Years of Writing and Editing for The Billfold
4. How a Program Assistant Dealing With a New Paycheck System Does Money
5. Classic Billfold: What I Wanted From My Move to Portland and What I Got
clothingclothing seriesdiyhobbiessewing