The Billfold
Treat Yourself 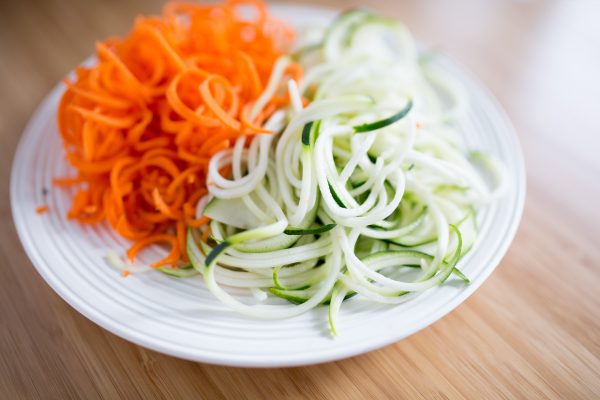 Photo by Laura Johnston on Unsplash.

It started with zoodles. Those zucchini “noodles” that are touted as the nutritious, low-carb version of pasta that “are here to stay” (as one organic website proclaimed). I’d always wanted to try them, but I didn’t own a spiralizer, and I really didn’t think the spiralizer purchase was worth it just to try out the hype. I had resigned myself to the fact that I might live a zoodle-less existence until, to my pleasant surprise, I discovered that my new grocery store was selling them in prepackaged containers.

“Why don’t you just treat yourself?” my mom asked. (I was chatting with my mom on the phone in the midst of my weekly grocery shopping.) “You’ve always wanted to try them.”

I took a moment to think about it. The prepackaged zoodles were priced at $8.99. Meanwhile, zucchini were being sold at $1.57 each. Considering that I could make my own zoodles for more than half the price of the prepackaged variety — as well as the fact that my dad has tattooed in my brain that one should never buy pre-sliced veggies unless one wants to be deemed a “sucker” — it seemed a bit steep. However, the fact remained I didn’t own a spiralizer, and if I was ever going to try zoodles without buying one, now was my chance.

For my budget, the zoodles were a splurge. As a single person who’s saving up to purchase her first home, I set my maximum weekly grocery budget at $50. As a vegetarian, I get a lot of meals for my buck since I’m buying mostly fresh greens and canned beans each week, along with the odd container of coconut milk, brown rice, or condiments. Some weeks I don’t even spend $50, which either goes towards next week’s groceries or puts more money in my pocket.

The zoodles alone would chew up almost 20 percent of that week’s budget, but I had to admit that when Mom suggested I “treat myself,” I perked up.

Dinners for one, chez moi, were getting kind of bland and boring. I’m a stickler for keeping a tight budget as much as possible, but I felt that it was also keeping me within a pattern of the same old same old — salad, more salad, stir fry, even more salad, pasta, oh wait more salad — because I knew what I could get for my price point without going over. I was in a rut and my palate was begging for something new. It was time to bring on the zoodles.

As nerdy as this might sound, the idea of the zoodles made my grocery trip that much more exciting. I felt like one of those MasterChef contestants who go all out once they hit the pantry portion of the show. While weaving in and out of aisles, I was brainstorming and googling all sorts of recipe ideas for these zoodles. Would I serve up some Zoodle Pad Thai, bake a one-skillet Zoodle Lasagna, or would I simply toss the zoodles in a little olive oil and lemon juice and top with parmesan?

My one caveat: I had to keep within my budget no matter what. This meant I had to buy a combo of frozen and fresh veggies and keep my bonus purchases to a minimum. The zoodles felt like an indulgence, so I wanted to make sure I was still being frugal. I decided on Zoodles Bolognese (with lentils) and off I went to unleash my inner Ramsay (with way less testosterone and rage) at home.

Because my zoodles meal ended up costing me nearly half of my budget, I ended up adding more veggies and beans to it, basically doubling it, so I could stretch it out for my lunch the next day as well as another dinner. I enjoyed being creative with my dinner, and it felt good that I was treating myself to such a “luxe” meal as opposed to saving it for guests. I even lit a candle and had a glass of wine with it — and this was on a Monday.

It didn’t hurt that it was delicious, either.

It was official: the zoodles had snapped me out of my rut. My zoodles experience was such a success that I started changing the way I approached meal planning and grocery shopping. I realized that cooking didn’t always have to seem like a chore. I liked the idea of buying one “indulgent” food and building a few meals around it. It not only made my shopping day more pleasurable because I got to research different recipes within my budget, but it also got me excited about cooking at home for one.

Soon after, I treated myself to other “luxury” food items like portobello mushrooms and salmon steaks. I even made a little game out of it, like, what can I make with with this indulgent item that will taste good, stretch out for at least two meals, and all remain within my budget? Maybe it was buying frozen brussels sprouts instead of fresh ones, or making my own breadcrumbs by toasting slices of bread. It got both my creative and salivary juices going, and I wasn’t overspending.

Not all dinners are winners. I don’t always light a candle or drink wine on a Monday, and some weeks I revert back to my routine of salad, more salad, stir fry, even more salad, pasta, oh wait more salad due to time issues or energy levels.

But when I’m jonesing for something new, I know I can treat myself to something new like zoodles and still remain within my means.

I have yet to buy a spiralizer, though.

1. We Did Good, Billfold
2. Question Wednesday
3. What I Learned From Five Years of Writing and Editing for The Billfold
4. How a Program Assistant Dealing With a New Paycheck System Does Money
5. Classic Billfold: What I Wanted From My Move to Portland and What I Got
cookingfoodfood seriesgrocery-shopping