The Billfold
Keep the Change

How Five Bánh Mì Sandwiches Helped Me Pass the Bar 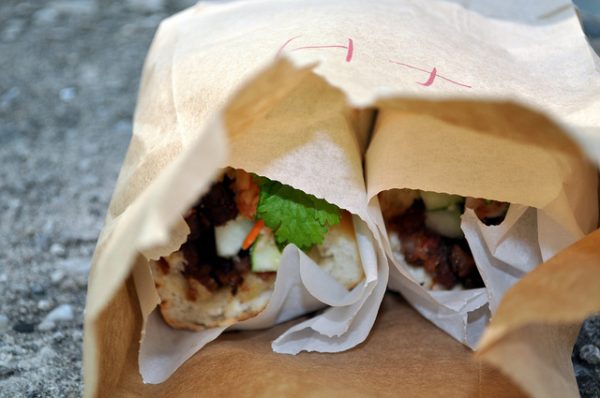 I passed the bar exam in large part because of five bánh mì sandwiches I bought in Little Hanoi, a Vietnamese district in Houston, Texas.

I was living off of the fumes of the cash I’d made briefly waitressing at the beginning of the summer, after school was over and before the Fear had set in about this huge test. I had worked at a wine bar in a suburban strip mall, someplace I was assured no one I knew would ever, in a million years, go. But I had quit after I got fed up with customers expecting me to be a doltish wine-wench, and after I had told a regular who harassed me where he could go and what he could do with himself when he got there. The tips had been decent, but the money had gone fast, and even at the bargain price of $10 for five sandwiches, it felt like a huge indulgence.

Back then, in the summer of 2012, my marriage was breaking up rapidly. My then-husband had supported us while I pushed through the incredible slog of law school and unpaid internships, through the stress and anger and peaks and valleys that come with being a law student. He had worked, and earned a good salary as an IT supervisor at a minor oil company, and eventually, we saved enough to make a too-small down payment on a house. Our own house! I would come home from class, full of injustices and cases I’d read and gossip and shit to talk about classmates, and I would cook dinner and we would sit down and eat together, the two of us, at the table. And when dinner was done, we’d go outside to our tiny patio and sit in chairs across from each other, both of us tucking our feet up on the other’s chair, sharing a blanket on the cold nights and stripping down to our underwear on warm ones, talking and smoking too many cigarettes and drinking too many glasses of wine as we watched the dog run around in the yard like his tail was on fire.

But at the end of all of it, when there was finally a light at the end of the incredibly long, incredibly dark tunnel, things started to fall apart. It’s not important now. It doesn’t matter. He was not who I thought he was, and I wasn’t who he wanted me to be. And, as our marriage crumbled and the stark truth of the situation was revealed, I realized how much trouble I was in.

I was 29 years old and I hadn’t had so much as an electric bill in my name for years. Our entire income was his. The truth was that I hadn’t taken law school very seriously. I did reasonably well for the amount of time I actually put into it, but every semester I was shocked and a little disappointed when grades came back and I hadn’t failed. Somehow I had graduated with a respectable class rank, but the idea of actually becoming a lawyer seemed horrible and foreign. I didn’t fit in, and I hated most of my classmates and professors. I had only really enrolled because I was frustrated with the thing I really loved, which was literature, and after I finished a master’s degree and looked at the prospects for PhD programs, I decided to cut my losses and just go to law school. I never thought it would actually take. It just sort of… happened.

So now here I was, a week before the bar exam, having spent the summer in outrageous despair about everything: my marriage, my future career, my financial and emotional prospects of survival.  If I failed the bar, I would likely never have the resources or position to be able to pass it again; just a huge amount of student loan debt and a worthless degree with no teeth. I had gotten a call from a woman from the study-course I had paid for but barely used. “It looks like you’ve completed less than 10 percent of the study materials. We are prepared to offer you a discount on the course for the next time you take the bar.” I laughed. “Yeah, I appreciate that.” I’d said, and ended the call. Deep breath.

I was alone in the house. My husband wasn’t home much anymore. It was a weekend afternoon and I suspected he was seeing someone else. The Saltillo tiles were cool on my feet even though the air conditioner wasn’t working and it was 95 degrees outside. I opened the refrigerator and smacked it shut. Condiments. Withered, well-intentioned vegetables. Things that felt too complicated to cook for myself.

I walked into my flip-flops and out to the car — the new car I’d just bought whose payments seemed so reasonable just a couple of months ago and now seemed so frightening in the face of no income.

A bánh mì, for the unenlightened, is a Vietnamese fusion sandwich. A length of perfectly crusty French bread is cut open and slathered with a garlicky, buttery aioli spread, topped with your choice of protein — spongy fried tofu, grilled meat, tiny meatballs, sometimes all of the above — and then crisp, quick-pickled carrot shreds, thin cucumber spears, cilantro, and jalapeño. Pâté spread is optional, and recommended. The sandwiches go incredibly well with thick Vietnamese iced coffee, brewed in a tiny aluminum drip container that hangs over a glass full of ice and sweetened condensed milk. Eating a bánh mì was all I could think about that day, in the face of my looming failure in so many different areas of life.

The bánh mì place I liked was across from a grocery store that had a bin of live frogs for sale, casually, like a tank of lobsters. So that’s where I went: to the tiny, pristine sandwich shop with huge signs in the window. I’d planned on sitting in a seat by the window, looking out into the sunshine and feeling sorry for myself, but when I got up to the counter to order, I ordered five sandwiches. It just seemed like the right thing to do. They handed me a plastic bag with five butcher-paper-wrapped bánh mì and I drove home.

I slung the bag of sandwiches, minus one, into the empty refrigerator.  An embarrassment of riches. A stockpile. No more excuses, no need to leave. I still had control over this. I walked into the spare bedroom, where I’d been living the past few weeks, and pulled out my books and notes and papers. It was time to get to work.

Allison Mathis is a public defender in rural New Mexico. Since 2012, she has divorced, moved to Micronesia, returned to Texas, remarried, moved to the high desert, and had a gorgeous baby. She lives with her awesome husband, Mike, and their beautiful daughter, Julia, in a yurt in the mountains.

1. We Did Good, Billfold
2. Question Wednesday
3. What I Learned From Five Years of Writing and Editing for The Billfold
4. How a Program Assistant Dealing With a New Paycheck System Does Money
5. Classic Billfold: What I Wanted From My Move to Portland and What I Got
career-changecareersdivorcefoodfood seriesmarriagerelationships