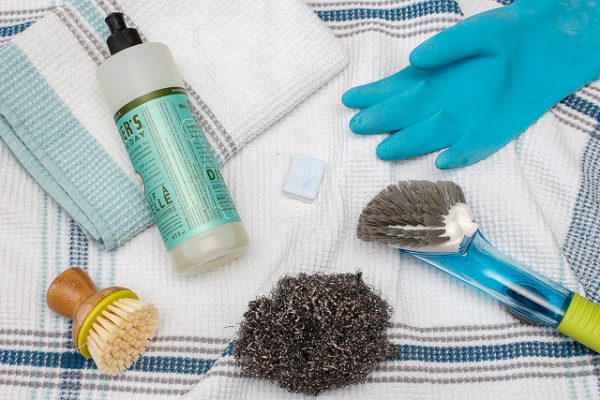 Trying not to think about money

Sometimes, being good with money means realizing just how much time you think about money on a day-to-day basis. The weird amount of mental energy I spend on my personal finances reminds me of my social media habits: it never feels like I’m spending that much time on Instagram, but then I realize that I’m instinctively opening the app after closing it.

My new money goal is to get to a point where I’m not thinking about money at all, either because it’s so routine that I’m not really noticing it or because I’m comfortable enough with my earnings and/or savings that I don’t sweat an unexpected bill, while also buying whatever shoes I want.

Going through a health phase

Since I can’t change my life by shopping, I’ve started thinking about: Diet changes! Exercise changes! Adding a multivitamin! Some people might say that this is a pricey way of making change, but not the way I’m doing it. Instead of buying dinners out or clothes, I’m hopping on my apartment building’s elliptical. I’m doing Yoga with Adriene instead of signing up for a yoga class. I’m also lucky that there are a few community yoga classes in my area on the cheap.

The diet changes dovetail into trying to cook more vegetables and legume-centric foods while drinking less alcohol. There’s also the forever goal of eating less sugar, but I can only handle one form of austerity at a time.

Catching up on TV

I’m not proud of the amount of TV that I watch, but I’m over being judgmental about it. I like TV, it’s cheap entertainment, and we live in the golden era of it. However, I have trash TV taste. I finally finished Greek after not even thinking about it since high school, and let me tell you, it’s not very good, but it was also a fun trip down memory lane. I’ve since upgraded to The Bold Type and Happy Endings.

Was this inspired by the recent TV catch-up of The Great British Bake Off? Yes. There’s the not-great possibility that you get a bad bake. But there’s the even greater feeling of producing something tasty out of disparate ingredients. I made bread for the first time in my life. It wasn’t great bread by any standard that Paul Hollywood would appreciate, but it was a satisfying use of my weekend — and at $3.69 for a bag of flour, it’s affordable.

Getting really good at cleaning

This may sound like a chore (it is). This may feel like the least fun thing to do with your free time (sure). But I have a very clean closet right now with a very tidy bathroom to match it. When I walk into these spaces, I feel satisfied at their state, followed by the hollow feeling that the cleanliness won’t last. I’m a clutter-person, with clutter tendencies. I only use what I can see. That means that my bathroom counters are an uphill battle and eventually I will need to start the whole process over again.

I thought that I would be doing more of this, but I’m not? I kind of assumed that my giant to-read pile would slowly, but surely start to shrink, but it’s stubbornly as tall as it was at the start of the year. The winter felt like a perfect time to hibernate with some books, but I guess all of these new hobbies are taking its place.

I have been making a list of magazines that I want to subscribe to, but that involves 1) spending money and 2) adding to household clutter, and why would I want to do either of those? More importantly, why do magazines seem so much more appealing than my stack of books?

To do lists, to buy lists, “I want” lists, “Stuff I’ve Done Today” lists. I have a fairly nice planner with a lot of space to fill up, but I seem to only fill it up with lists. I made a list of music that I need to catch up on from the “Best of 2018” lists (Snail Mail, I’m coming for you!). I made a list of movies that I want to watch on Netflix. This article is a list!

I will joke about these lists, but the needs/wants list is actually useful for me to mull over. I want a lot of stuff: I want a new dress, tortoiseshell earrings, and a subscription service to teach me how to embroider. I need pants for work and a sports bra. What have I bought? The sports bra. This is not to say that I’m immune to impulse buys of the small kind. I wanted ice cream sandwiches in the middle of January, so I bought them! But I’m conscious that I probably shouldn’t drop $80 on a dress that I don’t really need and might only wear once, vs. $40 on work pants that I do need and will wear once or twice a week.

These lists also remind me that it’s hard not to spend money, even when you’re trying very hard not to spend money. I keep telling myself I have all the stuff I need, and then I keep needing more stuff (or really, really wanting ice cream). Still, my self-imposed austerity attempt has helped me find more creative ways to spend my time than mindlessly shopping and spending — and when spring comes, I will leave the comfort of my list-filled apartment and maybe end my spending freeze. By then, I hope I’ll be able to use these new habits to make more mindful shopping choices.

Allison Kupatt is a native North Carolinian, museum employee, and movie lover. She tweets about all this plus cats @mundaneguts.

1. We Did Good, Billfold
2. Question Wednesday
3. What I Learned From Five Years of Writing and Editing for The Billfold
4. How a Program Assistant Dealing With a New Paycheck System Does Money
5. Classic Billfold: What I Wanted From My Move to Portland and What I Got
austeritybudgetingsavingtrying really hard not to spend money