The Worst Moving Experience of My Life 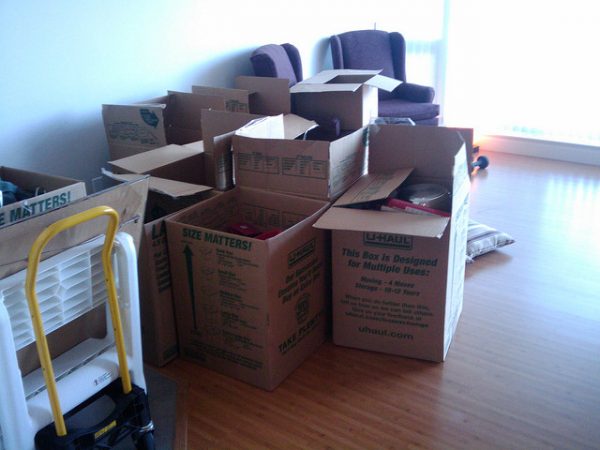 When it came time to renew the lease on a two-bedroom apartment that I shared with my roommate Ellen, we asked ourselves if we should move instead. Our rent was going up on our current place, so it made sense to look for other apartments, maybe with some extra roommates to help split costs. We knew we needed to consider both price and location, but, armed only with the vague idea of moving to a cooler neighborhood, we did not have a lot of luck in finding places.

Raleigh is in a weird situation right now. Compared to the country at large, it’s a very affordable city — but it only has a small amount of affordable housing. The reputation of the Triangle as a great place to “blank” (raise a family, start a business, etc.) has made it a more popular location for transplants, and that’s fine! Except… it’s also causing the housing market to get more pricey. The last time my roommate and I looked for places to live, the cheapest options were with independent landlords. This time, those were the most expensive. It became hard to justify leaving an apartment complex that had more amenities for an old house that would cost each of us an extra hundred dollars a month, even if it was within walking distance of a bookstore and coffee shop.

So we decided to stay in our complex but move into a three-bedroom unit and add another roommate. Our rent went down moderately, and our utilities were split into thirds instead of halved. We also went from a unit that didn’t have a washer-dryer to one that did, which has proven to be an excellent addition.

Unfortunately, the actual move-in weekend proved to be the worst moving experience of my life. It was the hottest weekend of the year, Ellen had strep throat, and I was on my period. Add in a mixup about when our lease started, trying to coordinate a mattress delivery and pick-up, and the questionable decision of going on an OkCupid date after the first day of packing.

I alternated between sweating through clothes, realizing that I had massive period stains, and trying not to get irritated at my roommate as she would try to help move and then lie prostrate on the ground. Luckily, friends and family were willing to help out and Ellen’s brother had loaned us his pickup truck for the weekend while we transferred large items. (Yes, the complex was large enough that we had to move items outside and transport them by truck — this wasn’t just hauling boxes up and down stairs!)

In terms of cash savings, we’re pocketing an extra $100 a month for a much more spacious place. Even though this was one of the cheapest moves I’ve ever done — and the shortest distance I’ve ever moved — our move-in week did rack up some unusual costs:

Move-in was around the same time as the wedding of two close friends. I bought their present and gave it to them in advance so that it would be one less thing to lug around while moving everything else in my life.

I’ve needed a new mattress for a few years, and my mom and her partner had suggested that I coordinate the purchase with the move so that I “only had to move one mattress.” I don’t recommend this because, even though I was moving from one building in the same complex to another, I had to beg the drivers to pick up the old mattress, which I had naïvely moved down to the ground floor. To them, this constituted “being outside” and they generally didn’t accept mattresses that were sitting outside. I think the drivers took pity on me because I was hot, miserable, and at the end of my rope by the time the new mattress showed up.

They did ask me why I was moving and rather than explain, weakly, that I was trying to save money, I responded “Oh, y’know. I wanted a change of scenery.”

Anyway, here’s my advice: just move your old mattress, even if you’re going to have it picked up later. You can use it for padding when moving delicates or something.

What I bought to celebrate being an adult and finally getting a new mattress.

We had received a coupon in the mail and I wanted a new shower curtain liner for the new place. I wound up with a few other items, including a pretty shower curtain that I got on discount since it had been a display model.

Why did I think going to therapy in the middle of moving was a good idea? This was the day that we had been told was going to be the first day of our new lease… then that shifted to the 22nd… then it turned out it had always been the 21st… so I think I was reasonably flustered at my appointment.

I think packing all day had eliminated any nervous energy that I would have had normally on a first date, so I came across like a normal person for once. Conversation flowed easily and we went from a tabletop game bar to walking around downtown Durham to grabbing a late dinner at M Kokko. This was the first date with my current boyfriend, so I can’t say that scheduling this date during the move was a bad idea — though I wouldn’t necessarily recommend it.

I bought a late lunch for friends who helped with the move. We ate, stunned, in my old apartment, surrounded by items that still needed packing and moving — but it felt extremely necessary to stop for a second to breath and rehydrate. This was definitely aided by some BOGO coupons.

I think this was done to weakly offer another set of friends a treat after helping us move on Day 3 of move-in weekend, but also because I really, really wanted a Frappuccino after all of this. NO REGRETS.

There are some other sundry costs with this move: the weekend of the wedding involved a trip to IKEA and I’m positive that I bought more cleaning supplies at some point. A bookcase that was given to me from my mom wound up worse for wear in this move, which led to a $50 Target cubby bookshelf replacement.

But the actual week of the move — busy with packing, gift-buying, dating, and going to work — was just a part of an extremely busy summer for me. The week after move-in included going to work early, taking a certification exam, going on another date, and topping it all off with two concerts. I wound up living with my life in boxes for several weeks, just because life got too busy to unpack.

The worst moving experience of my life so far has also been one of the cheaper options. It wasn’t a no-cost move, but for what I paid in sweat equity, I would rather have hired movers. That date turned out pretty well, though. Tonight we’re chilling out and plan on beating the crowds by celebrating Valentine’s Day tomorrow night at M Sushi, the sister restaurant to the place we went to on our first date.

Allison Kupatt is a native North Carolinian, museum employee, and movie lover. She tweets about all this plus cats @mundaneguts.

1. We Did Good, Billfold
2. Question Wednesday
3. What I Learned From Five Years of Writing and Editing for The Billfold
4. How a Program Assistant Dealing With a New Paycheck System Does Money
5. Classic Billfold: What I Wanted From My Move to Portland and What I Got
movingmoving seriesthe questionable decision of going on an OkCupid date after the first day of packing