The Billfold
Deck the Halls

The Cost of Moving In Together Over Christmas 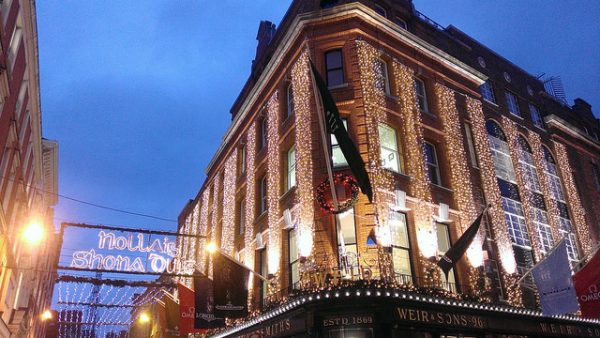 When my girlfriend finally got a job in the city, and it finally made sense for her to move out of her parents’ house and in with me, we were both delighted. That this happened a couple of weeks before Christmas didn’t put a damper on our enthusiasm the way it maybe should have — she doesn’t start until mid-January and won’t receive a full paycheck from her new job until February 27, but we had been basically living together in my tiny shoebox studio apartment for four months and were beyond tired of it. We wanted rooms. We wanted to have to pass through a doorway to get from the bed to the kettle. We wanted to eat dinner together somewhere that didn’t involve sitting cross-legged on the bed. We wanted a bathroom with more than four square feet of floor space (this is not an exaggeration: the bathroom floor space in my old apartment was smaller than the shower).

So we decided, mid-December, to get an apartment now. This turned out to be successful but stressful, and significantly more expensive than it could have been.

In Dublin, renting is a race at the best of times. We spent hours at a time scouring Daft.ie, the main rental site for Ireland, because to have any realistic chance at an apartment here you need to spot it within six hours or so of it going up on the site. We sent email after email to landlords, requested viewings for apartments in basically every area of the city, finagled references from employers at times of night much later than anyone should reasonably contact their boss, and got so trigger-happy with the “Contact Letting Agent” button we started sending requests-to-view before even working out where the apartments were located.

In the end, we got the apartment we did because a) I frantically moved lunchtimes and meetings around at work so I could rush to a viewing 45 minutes early and b) we were the only prospective tenants willing to sign before Christmas. I had seen the apartment only twice when we signed, never in daylight; my girlfriend saw it for the first time when she arrived to get the keys. We signed our lease on December 21.

Our new rent would come to €1,400 (a nice doubling of the €700 I’d paid for my studio), and because of how close to Christmas it was, we were told on December 20 that we had the apartment, but on condition that first month’s rent and deposit — €2,800 total — was sent to the letting agent before they closed for Christmas on the 21st. Having recently gutted my emergency fund to pay off some medical expenses, and with my half of the deposit still tied up in the deposit on the previous apartment I had yet to vacate, I turned to my parents for an emergency week-long loan until I could get that deposit back. Her half was even more desperately obtained, coming in the form of a hastily-approved low-interest credit union loan to be paid back in teeny-tiny monthly payments over five years. Both of us knew this was verging on absurd; both of us wanted our apartment and its actual internal walls far too much to care. We made our money transfer deadline by two hours.

I had to be out of my apartment by December 30. This timeframe would be reasonable during most months, but at this time of year was almost laughably tight, encompassing as it did the last day of work, all of Christmas, and the run-up to the New Year. Luckily both my old and new apartment, and both our family homes, are within a 40-mile radius; less luckily, we had already committed seven of those nine days to family occasions in one form or another.

We roped family and friends into helping, begged off several family dinners with the promise to have the people over at our new apartment as soon as we actually lived in it, and scrambled to get things organized. It took some doing. Four cars took roughly nine trips total between her family home, my old apartment and our new place, and several more to various grocery and homeware stores.

We moved into a barely-furnished apartment: we had a single two-seater couch, kitchen table and chairs, a bed, and a kitchen with only the most obviously built-in appliances (microwave, fridge, washing machine). We hit up IKEA and Argos right as the sales were starting, which may have saved us money, but certainly did not save time or blood-pressure levels. We saved nothing much in IKEA, where we had already set our sights on the absolute cheapest furniture of the type that’s already scraping the profit margin too closely to ever get discounted. We did, however, benefit from an improbable-sounding “buy one get one half off on all furniture” deal in Argos that saved us almost €50 on bedside tables and bookcases.

Moving at Christmas is tricky. Our letting agent went home for two weeks for Christmas directly from our lease signing, so we were more or less left to our own devices; electricity companies and gas companies and internet providers all close for large parts of the holidays. It took me a full week to finally wrangle a cancellation for the internet at my old apartment; the management company that oversees utilities at our new apartment building only contacted me on January 11 to finally switch over our electricity, the cost of which I dread to imagine as it will include heating an apartment that had stood empty and cold into late December. (The plus side of this is that our letting agent, in her rush to go home for the Christmas holidays, didn’t realize until too late that she’d taken a reading from the wrong electricity meter, so the reading we’ll actually start from was taken several days after we moved in.)

But we are here. We have rooms; we have a tiny balcony that faces the sunset, and a kitchen table that isn’t also a desk and a bookshelf and a place to put laundry. Every morning I wake up and make tea — by getting out of bed and walking into a different room to get to the kettle.

Karen Champ is a web developer in Dublin, Ireland who spends most of her time staying up until ungodly hours to watch ice hockey games online. She is on twitter at @karenchamp.

1. We Did Good, Billfold
2. Question Wednesday
3. What I Learned From Five Years of Writing and Editing for The Billfold
4. How a Program Assistant Dealing With a New Paycheck System Does Money
5. Classic Billfold: What I Wanted From My Move to Portland and What I Got
christmasholidaysmovingmoving series