The Cost of Trying New Vegetables 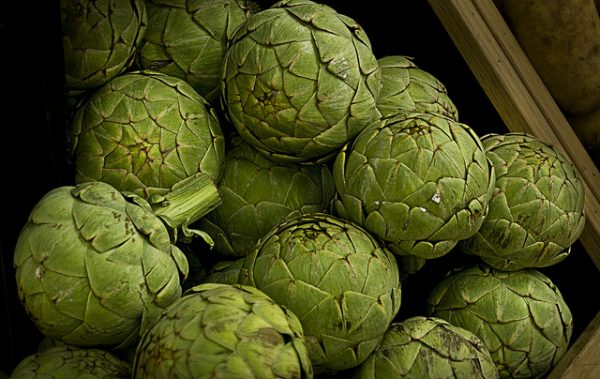 Whenever I look at my to-do list, “eat more vegetables” is pretty much always on there. (It fits into my generalized aspiration to “be more healthy.”) I’m a creature of habit, though, and tend to stick to a set rotation of recipes that only contain a few vegetables—and I’m wary of simply eating more of those standbys, lest I tip the balance and make myself start to hate them.

So, for the past couple of months, I set myself a mission: deliberately try new vegetables to see if I could bring them into my regular meal schedule.

I used two tactics for choosing vegetables. First, I picked up a Martha Stewart vegetable cookbook from the library and started picking recipes. (This required Google-image-searching a lot of vegetables while standing in the produce section.) Second, I scouted the grocery store for vegetables that looked interesting and looked up a recipe when I got home.

Here are my results:

I love canned green beans—and when my mother expresses distaste with how often I eat them, I tell her it’s her fault for feeding them to me all the time when I was a kid. (I also tell her to be thankful, because they were pretty much the only way I was eating any kind of vegetable for a long time.)

However, I’ll admit that my mother is right: fresh green beans, parboiled and then sautéed in olive oil/salt/pepper, are way better than canned. Out of all the vegetables I tried on this adventure, fresh green beans are the most likely to fall into regular rotation.

I really like butternut squash—especially cubed and roasted with olive oil. I added it to a risotto and topped a pizza with it. By itself, squash isn’t much to write home about, but it is a great additive, like sweet potato. I don’t care for the taste of the peel, though, and figured out it’s a lot easier to remove if you microwave the squash for about a minute.

Vegetable wizardry. All I had to do was cut it in half, scoop out the seeds, coat it with olive oil, and then roast for 40 minutes. The insides of the squash come apart into long, spaghetti-like strands when scraped gently with a fork. You can eat spaghetti squash with just salt, but I preferred to eat it like real spaghetti with a red sauce and parmesan. If you go in expecting pasta you’ll be disappointed, but it’s not a bad alternative.

I’ve had zucchini bread before, but that has sugar so it doesn’t count. Instead, I found a recipe for zucchini fritters and they taste wonderful, especially with a little sour cream/lemon juice mix on top. I’m not sure if frying something negates its “healthiness,” but I like zucchini fritters so much I’m considering getting a food processor so I don’t try and grate my thumbnail off again.

Sliced, generously brushed with maple syrup, and roasted, these tasted pretty good fresh out of the oven. However, they don’t hold up as leftovers at all, and I can’t reduce the size of the squash enough to make it a single serving.

I cut these in half, then roasted after coating them with olive oil, lemon juice, salt, and pepper. The crispy outsides were quite good, and the firmer insides were… fine? Kind of like when I cook kale with olive oil and lemon juice, the flavor of the endives isn’t strong enough to really come out—but I’m okay with that. I’d be more inclined to bring these into rotation if they weren’t so expensive! I didn’t even realize until I got to the register that I had apparently picked up a delicacy.

Blanched, chopped, and sautéed with tomatoes, garlic, capers, and spices, I was expecting the chard to make up more of the texture of the dish than the flavor. But no, the earthy flavor still came through. (Some people apparently love earthiness, but to me it tastes like dirt.) The chard was very pretty, but I think I can get more milage with kale.

I know what cauliflower is enough to avoid it on party platters, but I’ve haven’t tried it cooked in ages. They apparently now sell cauliflower in bright purple and orange, but I stuck with the regular white to make a cauliflower gratin. (Which I guess is a basically a casserole but with a bechamel sauce. “Fancy.”)

The taste of cauliflower is not offensive, but neither is it enticing. Having to smother something with cheese to make it palatable feels like it defeats the purpose.

I went in circles looking for fennel at the grocery store. An employee eventually showed me, and I found out that fennel is also called anise. I was hesitant about this one, as it’s supposed to taste like licorice (which I don’t like). My mother assured me that the licorice taste mostly cooks out. Once again, she was right! Chopped and then baked into a casserole-like recipe, the fennel softened nicely into a pleasant texture. The flavor was not incredibly exciting, though— and my grocery store only seems to carry organic fennel, which is expensive.

I tried to make baba ganoush by roasting an egglplant until the skin crackled and burned. It tasted… burnt. And mealy? And generally unappetizing. This is most likely my fault.

The second eggplant I sliced into rounds and roasted to make “mini pizzas,” but the texture is so far away from bread that they resembled nothing of the kind. I also may not have roasted them long enough, because they were still kind of tough? Either way, not good.

I don’t think root vegetables and I are meant to be. No matter how long I cooked this; the rutabaga-apple mash Martha Stewart was trying to guide me towards never appeared. When the rutabaga remained crunchy and hard, I nuked it in a blender. Unsurprisingly, it didn’t taste very good.

I grated this and combined it with grated potatoes to make a rosti. (Which as far as I can tell is like a casserole, just pan-seared.) Martha Stewart told me celery root is supposed be somewhere between regular celery and parsley in taste, and… sure. For me, that makes it somewhere between bland and earthy. Even with spices, the celery root didn’t do much for me; and, like jicama, it’s kind of a pain to prepare.

They say you’re supposed to re-try the foods you hated as a child after you’ve grown up. First because your taste buds change as you get older; second because you might have eaten everything boiled when you were younger, and now that you’re an adult you can roast things in olive oil for much better results.

Which means I had high hopes for these roasted Brussels sprouts. They looked good, crispy on the edges, and weren’t giving off that nauseating smell I typically associate with Brussels sprouts. I sat down, popped one in my mouth, and after a few seconds of chewing, had to have a very quick debate with myself about whether or not I was going to swallow. Brussel sprouts have not improved with age.

I… forgot what artichokes are. I figured I could find the “heart” of the artichoke and roast it, like all of the other vegetables. So I started peeling the leaves away from the outside. And kept peeling. And peeling. Turns out, that’s not what “artichoke heart” means. All I was left with were petals and regret.

I’m a little exhausted from trying so many new recipes, but I’m glad I undertook this experiment. I’ve succeeded in finding a few recipes/ingredients to use regularly, and re-discovered things about myself. (Mostly that I still don’t like root vegetables, and apparently relate all dishes to casseroles.) I’m very lucky that I’m in a position, both financially and time-wise, that I can afford to waste some money and food trying to find new favorites.

What foods have you bought with high hopes, only to find out they’re horrible? Did you throw in the towel, call it a loss, and toss it? Or did you chew your way through, because you’re a better person than me and refuse to waste food?

Marisa currently hikes in Colorado. She would also like you to know that most of our definitions for “what is a vegetable” are cultural, not scientific, which is wild.

1. We Did Good, Billfold
2. Question Wednesday
3. What I Learned From Five Years of Writing and Editing for The Billfold
4. How a Program Assistant Dealing With a New Paycheck System Does Money
5. Classic Billfold: What I Wanted From My Move to Portland and What I Got
cookingfoodforgetting what artichokes arethe-cost-of-things