How Not to Live: A Photo Essay on State Fair Food 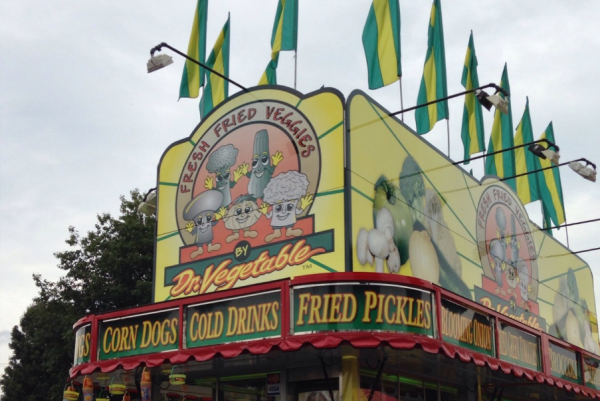 When Dr. Vegetable prescribes fried pickles, you buy them.

Every autumn, countless Americans attend county and state fairs to compete in such time-honored traditions as shearing sheep, pulling oxen, exercising swine, and coming up with new recipes featuring Spam or pecans — or both, if you’re truly talented.

And yet, if we’re being honest, many of us aren’t pulled oxen-like to these fairs because of some great interest in contests of agriculture, nor is it the attraction of the Gravitron or the old-car smell of shiny souped-up antiques. We come, against the wishes of our primary care physicians, for the food. Not to cook it, but to eat it. Eat a lot of it.

Why do we do this to ourselves? Fairs are expensive, and so is the weird garbage food, both in price and calories. But it’s a one-time thing, Kati, you say. I can afford to splurge just this once. Well, shut your face, dear reader, I know how often you get French fries at the McDonald’s across from your gym, because I’ve been there. We’ve all been there. McDonald’s and gyms go together. I’m not here to judge. I’m here to show. To give you a highlight reel of what you can expect to go through if you subject yourself to this state fair nonsense.

Attend 100-year-old The Big E, aka The Eastern States Exposition, aka the supersized state fair for the six itsy-bitsy-too-small-to-have-their-own-individual-state-fair New England states, and document an average amount of consumption of fried food throughout one afternoon. It’s not pretty, my friends. Not pretty at all.

The Big E tickets: $15 per person. $28 if you want unlimited midway rides. Another $5–20 for parking, depending on how much walking you want to do and whether you decide to support West Springfield High’s band — go Marching Spartans!? — or some randos who live close to the fairgrounds.

This basket of fried food was so daunting Michelle had to stretch before she even opened up the buttermilk ranch dressing that came along with it. Because nothing says “heart-friendly” like slathering full-fat dairy on top of oil and batter. Sigh.

Okay, enough with the lecturing. How were the “zesty spears,” as Michelle called them? The pickles were good, but apparently she could eat “a thousand of those mushrooms.” Fried mushrooms — who knew?

See, it was all fun and games at first, but by the second “zesty spear” (post in the comments if you decide to call your band Zesty Spear) Michelle was asking if she had to eat them all, in a tone that suggested she would be sick if she had to finish the basket. In the end she ate all the bonus veg, but only four of the eight pickles provided. As we walked away from our table, my sister sang, and I quote, “I’ve got a baby in my belly, and it’s made out of pickles.”

Deep-fried martini: $12. Unlike Dr. Vegetable, who was everywhere I turned at the fair (basically the food equivalent of Dr. Oz), we could only get the fried martini at one location: the V-One Craft Cocktail Bar in the Young building. Consumers: Michelle and her other older-but-not-wiser sister, Allison.

What’s fun here is that Michelle ate the first one, Allison saw her reaction to the drink, then took a chance on the second one anyhow. Meanwhile, that guy behind Allison in the photo? Said he’s spending the fair watching people have the same reaction all day, every day.

So what happened to the final ball of dough?

Apparently the worse crime was letting the fried alcohol go to waste.

Now that Michelle was, in her words, “DRUNK,” we had to get dessert.

Fried cheesecake: $7. Consumer: Mainly Michelle, though we all took a nibble. It was warm on the outside, slightly frozen at the center.

Let’s recap. At this point Michelle had three shots of alcohol (two of which were fried) in her system, so I was a little worried about how she was going to react to the dairy. You know what she did? She scoffed at me. Scoffed like a woman twice her age, or a child half her age, and claimed not only to have an “iron stomach, stomach of steel,” but to be “Iron Man and Superman all in one.” Marvel and DC: if RDJ or Henry Cavill start making excessive paycheck demands, we have an alternate path for you to take.

Though I didn’t love the texture of my fried cheesecake bite, it seemed like this was Michelle’s favorite of the three foods and turned out to be the only one she finished, but…

As she was finishing the cheesecake I swear Michelle said, “This is good… but I wish I had the fried pickles.”

After photographing my sisters eating fried food over the course of the afternoon, I had a hankering myself for fried peanut butter cups: $5, which I shared with Allison after Michelle had gone home.

How were they? Amazingly delicious. But guess what? Now I’m many dollars poorer and my stomach hurts.

Side note: my teeth are orange from a Slushie: not fried, $5 for the smallest cup, and guarded by many bees, but that’s another story.

The moral of the story, according to Michelle, is “I can’t button my pants anymore.” I like pants. We all like pants. So, if you must eat fried food, at least wait till the only time of the year when it’s truly acceptable to have pant-buttoning issues: Thanksgiving. With the $60 (or more) you save from avoiding the state fair, you could invest in a deep fryer of your own, make the most amazing turkey of your life/go to the emergency room with second-degree burns, and put “new pants” on your Christmas list where clothing purchases belong instead of implying a relative needs to buy you new pants just because you went to a fair together and she encouraged you to eat some unhealthy food, Michelle.

1. We Did Good, Billfold
2. Question Wednesday
3. What I Learned From Five Years of Writing and Editing for The Billfold
4. How a Program Assistant Dealing With a New Paycheck System Does Money
5. Classic Billfold: What I Wanted From My Move to Portland and What I Got
cookingfoodhumormoneyvacation