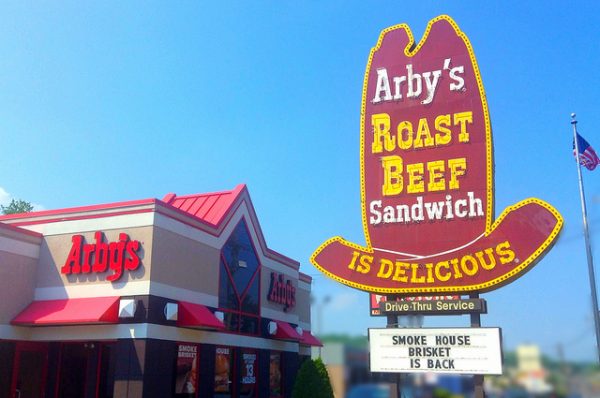 I’ve had a lot of different jobs in various industries, starting with fast food and ending (thus far) with marketing while also writing for the internet. From age 16 to 30, here’s what I’ve been getting paid to do for the last 15 years.

I got my first job when I was 16. I worked at Arby’s, one of two fast food joints in my Ohio hometown (three, if you count the Subway tucked inside the gas station across the street).

I am pretty sure all of my friends from high school worked at this Arby’s at one point or another. When they get fed up with the place, they’d threaten to apply to work at McDonald’s instead. Because I wasn’t 18 yet, I wasn’t allowed to use the roast beef meat slicer, but I managed to cut myself pretty badly while washing dishes in the back instead. Everyone had their favorite (and least favorite) people to work with, and it was inevitable that you’d take your crush’s order in the drive-through at some point. It was best to just get it over with on day one, like I did.

The summer after I graduated from high school, I worked for a whole two weeks as a telemarketer. This was another local business that cycled through most of my hometown’s teenage population, and many of them were way better at telemarketing than I was. If I made a sale, it was purely by accident, and I didn’t feel good about it. We were selling an add-on service for a bank I won’t name, and I am 90 percent sure it was a service they were already offering for free. (Credit card fraud protection isn’t a thing you opt into — it’s a default setting.)

I wanted to quit after two days, but my parents wouldn’t let me until I found a new job. Luckily, I did, in a very different field…

This one still baffles me, but I’m thankful for it. Despite having no medical background and being an 18-year-old idiot, I was given one day of training on the difference between systolic and diastolic blood pressure and sent to the tri-county area homes of the elderly.

I was nowhere near being a home health care nurse, but I was told to pick up prescriptions, clean, and prepare meals for clients. Because we were in a rural area, a lot of them lived in pretty remote homes and needed a little extra assistance. Clients ranged from a pair of cantankerous sisters who lived next door to each other to a well-intentioned old man who would ask me to run errands at a grocery store that no longer existed. It wasn’t hard work, and mostly the people I visited just wanted someone to talk to. They were always glad to see me.

For two summers in college, I worked as a hotel housekeeper. The first summer was at a chain I will never stay at again, and the other was at a much better chain I still use to this day.

During that second summer at the nicer place, I got to work alongside my best friend from high school. We carpooled, we got a free, hot breakfast every morning, and sometimes people left unopened beer in their rooms after they checked out. Our part of the state has since experienced a gas boom and the development that comes with that, and I suspect it would be very different place to work now that it’s no longer the somewhat sleepy interstate change-off town that it was when we were there.

My first job out of college was writing for a chain of newspapers that covered Columbus, Ohio suburbs. I had a school beat and a municipal one, and since they were on opposite sides of the city, I learned my way around pretty quickly.

One of my favorite stories involved tagging along with a group of Central Ohio WWII veterans on a day trip to Washington D.C. to visit the new WWII memorial. I got to interview the veterans about their experiences and help readers see the memorial through their eyes.

On the other end of the reporting spectrum, there were also a lot of school play opening nights and science fairs.

Way too soon, I left the newsroom for a PR position in the same city. I was 22 and blinded by the prospect of a giant raise. The job paid almost 50 percent more, but was more than 50 percent less fun.

I was there for two years and completely miserable, although I did get to work with some other really great women. I saved up for months and gave my notice to move to Chicago, even though I didn’t have a job lined up. It was a crazy decision that made my family super nervous, but I’m glad I did it.

I arrived in Chicago around Halloween and got a temp holiday gig at Macy’s shortly after. I lived in a northwest neighborhood but I was pretty hellbent on getting a job downtown. When I applied at Macy’s I really wanted to be in the shoe department at the giant State Street location that occupied an entire Chicago city block, but instead I was assigned to selling housewares in the much smaller, nearby Water Tower Place store.

I later realized how lucky it was that I didn’t get my way. The shoe sales staff worked harder than anyone, and at least in my department, no one was trying to shoplift KitchenAid stand mixers. (If someone could have walked out the door with two stand mixers on their feet, they probably would have.)

I got hired as a fact checker at Groupon not long after the Macy’s holiday season ended. I worked at Groupon for three years, which was super fun until it eventually wasn’t.

When I started, our office was based in the Loop, which made for a pretty impressive commute for someone still new to the city. Groupon was also where I met a bunch of my best Chicago friends, since we were all a bunch of 20-somethings running around an internet company and going out drinking together after work on Fridays.

Groupon didn’t turn out to be the editorial department gig I thought it would be, but the place had a fun company culture. When I started job hunting again, I had a pretty good idea of what I wanted out of a job, both in terms of culture and opportunities—which helped me find my next (and best) position.

Marketing for a Trade Association

I left Groupon to take on a marketing position in the Chicagoland area. I traded my train commute for a couple hours in my car every day, but listening to podcasts helped.

After a year at my company, I asked if I could work remotely from Portland. They let me keep my job, so I moved across the country without having to worry about job hunting this time. I love what I do, and working from home is pretty great. I’ve written recently about some ambivalence I’ve felt about Portland winters, but it’s nice to know that remote employment has a little more flexibility in case I change my mind about where I want to be.

Meryl Williams is a Portland writer who is chronicling her life as a roller derby girl via her awesome TinyLetter. She loves Rilo Kiley and most cheeses.

1. We Did Good, Billfold
2. Question Wednesday
3. What I Learned From Five Years of Writing and Editing for The Billfold
4. How a Program Assistant Dealing With a New Paycheck System Does Money
5. Classic Billfold: What I Wanted From My Move to Portland and What I Got
every job I've ever hadjobsmarketingretail