My Nine Months as an Uber Customer Service Rep 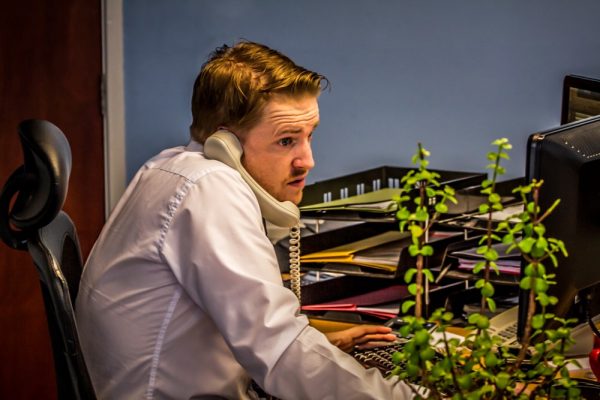 What I remember most are the funny stories from disgruntled riders. There was the woman whose driver showed up so drunk that she pushed him into the passenger seat and drove herself to Kennedy Airport. Or the sleepy guy who ordered a ride home only to wake up in line at a McDonald’s drive-thru.

But there were also things like the short one-way trips taken during surge pricing — which could reach up to 9.5X the normal fare — that wiped out more than one rider’s monthly rent.

In 2014, I spent nine months as an Uber Customer Service Representative (CSR). I found the posting on Craigslist while looking for telecommuting jobs. At the time I didn’t think it would be the job I would later leave off of my resume. I interviewed with a woman over Skype whom I never met again. The offer was $15 an hour. I signed the standard non-disclosures.

Uber is not the employer of record of its CSRs: that’s ZeroChaos, essentially a pass-through HR agency that touts itself as a clearinghouse for “contingent worker solutions.” At the start of our two-week orientation we were introduced to “Hector,” who walked us through the mechanisms Uber uses for client satisfaction and tracking: programs with names like Hipchat, Zoom, Zendesk.

Of course we had other questions for Hector. Vacation time? No. Work holidays? Mandatory. Performance incentives? We’ll mail you an Uber T-shirt.

Walking us through a PowerPoint deck from Legal, Hector made sure we understood to never refer to Uber drivers as “employees,” which wasn’t hard, since we weren’t technically Uber employees either. Nor were we ever to refer to Uber as a transportation company; it is an app instead, and the app is never to be referred to as a “taxi meter.”

Uber assigns each rider complaint with a ticket number. As we helped one another via WebCams and honed our skills solving practice tickets, I got to see what the other CSRs-to-be across the country looked like: their cats on their laps, their tastes in interior décor, their children playing in the background. Most of them were quick learners and seemed eager to solve as many tickets per shift as possible, with 10 tickets an hour as our goal. Hector said he and his team of managers would monitor our progress and encourage us to work more efficiently, without obscuring the subtext that he was up for a promotion if he picked the best CSR team.

“Uber on!” Hector exclaimed earnestly, at least five times a day. He really loved and believed in Uber. I suppose I don’t see a $50 billion company as eminently “loveable,” but unlike us lowly CSRs, Hector had a lot to love about it: free rides, free trips abroad, even the option of being paid in Bitcoin.

My CSR cohort was split into two divisions: those working on rider complaints (me), and those helping prospective drivers through the onboarding process (i.e., background checks, licensing, insurance). Uber made no bones about our expendability. Our shift preferences were largely ignored, and we never got those T-shirts they promised. Still, it was fascinating to watch the company, from the point of view as an inside-outsider, desperately trying to pacify irate customers.

There were, by my count, about 190 things that could go wrong with an Uber ride, from sexual harassment to smelly drivers. We had templates for everything. Unpleasant smells were not to receive $5 in Uber “appeasement,” and nor were chatty drivers. Cigarette smoke was unfortunate, “but don’t worry, we’ll share your concern with this driver.” No-shows were refunded, as were stolen Uber rides.

I estimate that half of the tickets I solved contained rider profanity of some kind. It was as if riders took a cancellation or a wrong turn as a personal affront against them. I saw a lot of honest and a few flagrantly dishonest mistakes. A driver would do a rider the courtesy of going a longer way to avoid bad traffic, only to have that rider complain that a circuitous or inefficient route was used. A new user didn’t get $30 off his first ride, you find, because he’s already been flagged for creating multiple accounts.

One thing about the job I liked: It gave me an opportunity to feel like I was Robin Hood, giving away Uber’s money. We weren’t allowed to refund anything over $35, but anything under that number was fair game, and our managers were so overwhelmed with disrupting transportation — Uber Helicopter! Uber Zeppelin Rides! — that they rarely audited our tickets. In fact we only really heard from our supervisors when we had more than 50 unsolved tickets in our own personal queues.

The hardest tickets to solve — and by that I mean, the most time consuming — were fare adjustments. We would track a rider’s travel route and check it against any “best route” alternatives, then adjust the final charge up or down based on computer-generated fare estimates. The easiest to solve were lost items (“Apologies for your missing cell phone! You can contact your driver at XXX-XXXX, but consider also sending him/her a text in case s/he is driving”) and ride cancellation refunds. It didn’t take me long to I find that I could refund about 30 cancellations every hour — just by hitting the $5 “Appease” button — which meant all I needed to work was a 2.75 hour blitz before the end of my shift to hit the 80-ticket-per-day quota.

It’s not that the company is bad — just evil. As I worked a Friday night and watched the Surge levels continue to rise, what little that was in my bank account would boil along with my blood. You got to feel for drivers, how frustratingly long it took to onboard, the expensive upfront costs they ate to get approved on the system, the lack of mentorship and virtually no office hours or culturally competent CSRs to assist them. About halfway through my tenure we were subjected to humiliating productivity e-mails, where we were “ranked” by performance metrics our managers wouldn’t divulge (not that I really cared by this point) followed by You’re-The-Weakest-Link pep talks (“My team is ranked fifth this week. You don’t want to embarrass me and let your co-workers down, do you?”). At the end of nine months Uber declined to pick up my contract and I returned to my old industry.

The biggest irony? Most CSRs in my cohort had never taken Uber before, because they couldn’t afford it.

1. We Did Good, Billfold
2. Question Wednesday
3. What I Learned From Five Years of Writing and Editing for The Billfold
4. How a Program Assistant Dealing With a New Paycheck System Does Money
5. Classic Billfold: What I Wanted From My Move to Portland and What I Got
customer-serviceeditors-pickjobs