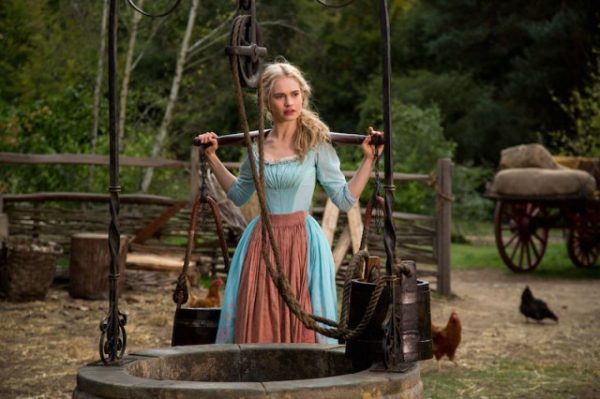 To celebrate The Billfold, we’re sharing some of our favorite posts. This piece originally published on March 18, 2015.

True love triumphs all. Even after 65 years of feminist criticism, Disney’s Cinderella insists true love and magic are greater forces than anything else. That’s a beautiful message to send to young children. However, upon closer inspection, there is also an embedded economic system at play. After all, by its very design, the rags to riches plot necessitates a two class system. Some characters are written into poverty and others into wealth. Though Disney-movie-poor means having animated mice to keep you company, it is still a situation everyone is clamoring to get out of. And in the end only one of them makes it.

The story goes that, once upon a time, there was a girl named Cinderella who grew up in a happy, financially sound household. When both her parents pass away, Cinderella is completely unprepared to support herself and ends up under the care of her stepmother.

The stepmother, a twice widowed single parent, is devastated by the loss of her husband’s income. Though relying on marriage to make end meet has failed her twice, the entrepreneurial character seeks to invest in a third husband. She has been raising her biological daughters to follow in her footsteps, preening them to attract husbands of their own. Instead of financial independence she teaches them to be co-dependent on someone else. Having this third child thrust upon her — meaning she must now secure four husbands for the household — proves too much.

So the stepmother insists Cinderella learn a trade: housekeeping.

Cinderella quickly learns there is no such thing as free lunch, not even from family. Despite her education, the pay is bad and the work is hard, but like Boxer in Animal Farm, Cinderella’s code of ethics help keep her spirits high. (Also the animated mice.) This makes her a great person and all, but it leaves Cinderella to wait on whatever wealth trickles down from her stepmother.

Now four women are stuck sharing class and living quarters. Although the stepmother can elevate herself to the top of the household, she cannot leave it. As long as the daughters rely on their stepmother — Cinderella for income, the daughters for allowance — they can climb no further than she.

Enter the prince. After being born into wealth, the prince is about to inherit the family business. His first act as king will be to invest in a queen that will bring a high rate of return to the kingdom. Though he appears to have unlimited wealth and power, the prince’s moves are limited: unless he appears to do what is good for them, the peasants may revolt. The prince’s father pressures him to invest in a foreign princess, procuring an international agreement and potential to increase GPD with shared resources.

When there is a ball at the palace, the stepmother brings her biological daughters to network. Despite her hard work, Cinderella cannot afford to go. Until a savvy loan shark comes along with an easy way to get a ball gown and a golden carriage, with no down payment. Cinderella is thrilled. At the very last minute, the loan shark adds that everything will be repossessed at midnight. If Cinderella has any second thoughts, it is too late — she is already driving away in her shiny new carriage.

After making the sale, the fairy disappears. Her client will be on her own to explain how she came in a pumpkin.

At the ball, the prince considers the opportunity cost of each potential bride. The prince meets Cinderella, an articulate young woman with several years of work history. When he learns that Cinderella is not from another land, but from his own, that seals the deal: the prince chooses butter over guns, and invests in an alliance through the classes.

Thus Cinderella is pulled out of poverty and put in the palace, where she lives happily ever after.

At the end of the story, you’re supposed to believe the greedy step-mother got what she deserved, praise the altruistic godmother, and admire the non-material nature of Prince Charming.

But several questions remain, namely: Why does Cinderella get pulled out of poverty? What does she do that her stepmother does not? Would Cinderella have succeeded if she had to take care of three children? Would she have succeeded without the initial advantages she was given as a child?

Was it luck of the draw?

In the end, the answer is whatever the prince decides it is. In his defense, he is expected to fix all the kingdom’s problems with one mutually exclusive marriage, an impossible task. Had he instead chosen to marry the Princess of Faraway, Cinderella would have to pay off her loan under uncertain employment conditions. Even in choosing Cinderella, all the other poor households remain poor. How can everyone benefit if only one person can win? They can’t; but because this girl made it out, this one beautiful girl from the lower class found her way to the top, there is hope. Across the kingdom, everyone believes they can too — all it takes is a little luck, circumstance, hard work, and magic.

Amanda Pampuro is a wholesome anarchist living on Guam. She quit teaching to write one-liners and review days of future past.

1. We Did Good, Billfold
2. Question Wednesday
3. What I Learned From Five Years of Writing and Editing for The Billfold
4. How a Program Assistant Dealing With a New Paycheck System Does Money
5. Classic Billfold: What I Wanted From My Move to Portland and What I Got
classic billfoldmovies