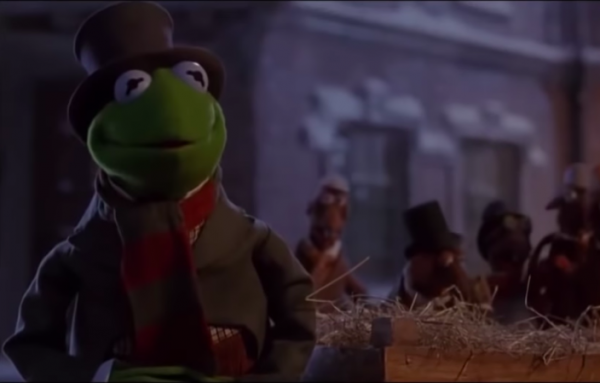 With Christmas lurking around the corner and the threat of being coated in colossal blobs or PVA glue and glitter looming, my son, Sidney, and I decided to kick back and embark on our second annual Festive Film Review.

We hung up our coats and wellies, put the arts and crafts on hold for a while, fired up a couple of warm drinks, and chowed down on a little Christmas movie viewing time. Sidney, of course, was the boss — deciding whether we’d sit through an entire screening or change films quicker than Clark Kent gets into his Superman slacks when there’s danger.

The films in our lineup are not new, but Christmas classics (by popular belief, anyway: Sidney didn’t agree that all of them should have such a privileged status). Here’s what Sidney, nearly three years old, thought of them:

Reaction: “No thank you, I don’t really want it.”

As a young lad, I loved The Muppets and as the film is based on the Charles Dickens classic (I also like Scrooged with Bill Murray, but I’ll wait until Sidney’s older before I ask him to review it), I was really excited to share this festive movie with Sid. Almost immediately, he made it clear that he wished I hadn’t.

Just after the opening credits rolled and before the camera had a chance of waltzing its way through the seasonal Victorian market, Sidney jogged up to the television and proudly uttered the words, “no thank you, I don’t really want it.” And he didn’t persevere.

How the Grinch Stole Christmas (2000)

The works of Dr Seuss are iconic and it’s only right that they should be passed down through the generations. Sidney enjoys the books we’ve read together, so I thought I’d show him How The Grinch Stole Christmas, starring a certain Mr. Jim Carrey.

This is without a doubt one of my favorite festive films, so I was hoping that Sid would enjoy it — and he did, in parts.

Perhaps he’s still a little young to pay attention to the movie in its entirety, but Sidney did marvel at the dreamy-yet-obscure festive scenery and he giggled out loud at the vast majority of Jim Carrey’s most side-splitting moments.

This is a movie I’ll certainly try again in future years and we may just go and see the new animation in the cinema before December 25.

The Polar Express is an enchanting festive family flick and one that I enjoyed more than I thought I would, but it’s not about me. Sidney, the boss, was at times more interested in playing with the blanket strewn across our couch (it’s a very versatile item that we use to play games such as “tug-of-war,” “the gray zone,” and “who’s under the blanket?”) or munching his array of snacks, but he was whimsically hypnotized by the twinkly backdrops and razor-sharp Christmas-inspired animation. He even said “wow” a few times.

Watching this was a warm and incredibly festive family viewing experience and it might be a contender for the Xmas Eve repeat movie slot this year, although toddlers often change their minds like the wind — so we’ll see whether it gets a second viewing.

Budget: A little over $2 million, approx.

Conjured up by the brilliant mind of author and playwright Julia Donaldson, this movie adaptation of the original children’s book is the undisputed champion of festive flicks in our household this year.

The movie itself is short which is, of course, preferable for toddler viewers, but with a brilliant cast, engrossing animations based on Axel Scheffler’s original illustrations and an equal measure of thrills, spills, melancholic misadventures, and heartwarming triumphs, it’s amazing what you can cram into 30 minutes of film.

Sidney laughed, he smiled, he said “oh no,” he shrieked “oh dear, be careful Stick Man,” he kissed the television, he cheered and, when it was all over, he demanded that my wife and I put it on again — which we did.

It’s been a heck of a ride reviewing films this year, and once again, one of the movies with a more modest budget emerges as the winner. Naturally, there’s no exact correlation between film budget and viewing value; it’s all in the eye of the beholder. All I can say is: you’ve probably had a busy year, so kick back, find the films that you cherish most as a family, and enjoy, enjoy, enjoy.

Wherever you are and whatever you decide to watch over the holidays, Sidney and I would like to wish you a very Merry Christmas and a Happy New Year.

Dan Hughes is a writer with a penchant for oddball fiction, the bass guitar, beer, Bukowski, and traveling to strange places. You can find out more about him by getting lost in his Catchy Space.

1. We Did Good, Billfold
2. Question Wednesday
3. What I Learned From Five Years of Writing and Editing for The Billfold
4. How a Program Assistant Dealing With a New Paycheck System Does Money
5. Classic Billfold: What I Wanted From My Move to Portland and What I Got
christmasholidaysmoviesparentingtoddlers