The Cost of Homemade Halloween Costumes 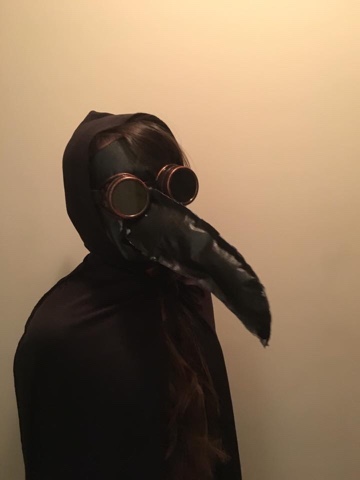 I grew up in the Midwest where there was often snow on Halloween. My costumes had to fit over a snowsuit or have a heavy coat integrated into them. There were a lot of Halloween ghost costumes in Kansas for that reason; dropping a sheet with eye-holes over winter gear worked. When my kids were younger, store-bought costumes worked with whatever their current character fixation was: princess, Power Ranger, Transformer, Star Wars. It was easy and quick to buy a $20 costume — plus, we live in the South, so no snowsuit requirement.

Then my kids hit late elementary and middle school, and the costume requests became more specific and obscure. Luckily for me, my older teenager decided Halloween was for babies and his costume was “surly teenager handing out candy.” That is a costume that exists in his closet at all times. I was not so lucky with his sister. One year she wanted to be an obscure female superhero. We could have purchased a $150 canon-accurate cosplay outfit, but instead we bought fabric and created the costume ourselves. Last year, she threw me another costume curve ball with her request to be a “plague doctor.” I began researching and asking her questions about what that meant. It turned out it meant I would be ordering from Amazon and spending money.

When I went to Amazon, I immediately discovered this was not a cheap or easy costume. I also learned that, as with most costumes designed for teenage girls, “sexy plague doctor” costumes exist (and regret clicking on those search results). With my daughter’s very careful guidance, we settled on ordering a long black cape ($15) and steampunk goggles ($8) from Amazon. While there were actual plague masks available for purchase as well too, she decided to make her own. She was researching the plague at school and made her “costume” do double duty as part of a school project. For the plague mask, we bought several paper mask bases at Joann’s ($15), a black faux leather remnant ($8), hot glue ($3), black feathers ($3), polyfill stuffing ($10) and black thread and needles ($3). She put together the mask on her own and we ended up returning two of the extra masks ($5). We used some things we had at home already to complete the costume: black pants and shirt, oregano as “plague doctor spices,” and black shoes. Overall, the costume ended up costing $54 in supplies, but most of those supplies were basic items that we could use in other projects. The cape and goggles are great basics to have on hand as well.

She took the costume to school and used it for two class projects on the black plague. Her teacher was a little stunned by the detail (and she got an A). She then wore the costume for Halloween trick-or-treating.

My daughter isn’t the only one who has come up with some inventive costume ideas. Cheryl of Holly Springs, North Carolina had her daughter ask to be a matador. Like the plague doctor costume I had to create, she had no idea where the inspiration for being a matador came from. She told me she loves making costumes from materials she already has on hand, and viewed it as a challenge. They used black leggings, the top of a red dress that they cut off at the bottom, shoulder pads with glued fringes, and a Dracula cape from another costume. The total cost was only around $20, with the added glued-on bling being the most expensive part of the costume. Cheryl went on to tell me that her daughter wanted to be Marie Curie the next year. That year she knew where the obsession came from; her daughter had just finished Curie’s autobiography. The costume came together for only $17 with a black top, the black Dracula cape, some black ribbon, and a green prom dress from Goodwill. The final touch was glow-in-the-dark sticks to give the appearance of a radioactive green glow.

While creating quirky costumes can require a little creativity and some shopping, the process can be fun for kids to work on. We now also have a great black cape that gets a lot of use, for example. It was $50 well spent and there was not a hint of “sexy plague doctor” in what we ended up creating. This year, my daughter has decided to do a group costume with three of her friends. It is time to get the hot glue gun out again!

Amy Barnes is a writer published by sites like Romper, Motherly, McSweeney’s, Criexo, and many others. She has two kids, one husband, and two dogs that hinder and inspire her writing.

1. We Did Good, Billfold
2. Question Wednesday
3. What I Learned From Five Years of Writing and Editing for The Billfold
4. How a Program Assistant Dealing With a New Paycheck System Does Money
5. Classic Billfold: What I Wanted From My Move to Portland and What I Got
halloweenholidaysspooky moneythe-cost-of-things