I Was a Haunted House Zombie Girl 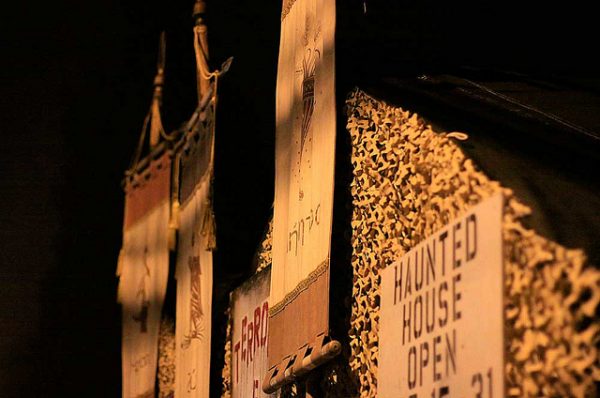 I didn’t want the job at the haunted house. I was thirteen, so I didn’t want any job, but I did want the money. It didn’t pay much, but there’d be just enough to buy all of the sequins, glitter, and fur-covered items I desired at Limited Too. By the time the job at the haunted house began, I desperately needed to slap some sparkle on the increasing intensity of my insecurity that had somehow only expanded as I grew from “tween” to “teen.”

I especially needed some new sweaters since I couldn’t trust my family to purchase ones that wouldn’t ruin my life. The year before, I made a grave mistake by wearing a powder-blue fur crop top my aunt had bought me. I wore it that night to the weekly Friday football game, ready to show it off. It was Limited Too! When I approached the bleachers that evening to settle in for the night with my friends (who were also all wearing Limited Too), a boy who’d often stick the bones of his back out as though they were wings called me “furry tits” as I approached him and his friends. Mortified, I crossed my arms over my chest and spent the rest of the night thinking about how I could destroy or “lose” the sweater immediately. Obviously, I could never wear the sweater again. I already felt monstrous enough with pink craters of acne that crested across my pale cheeks, the “jelly rolls” and “baby fat” that had not yet gone away, and hair that had become unmanageably curly at the onset of puberty. Often I put my curls into two tufts on the top of my head after giving up on trying to straighten them.

The haunted house job would be my first real job, not counting the pittance I earned working freelance in an unstable babysitting market. I also, technically, held a short-lived position as a swim instructor, but I quit on my first day after a toddler’s head dipped beneath the water and I realized — shockingly — that I was responsible for making sure said toddler (and all the toddlers in my future) would come back up unharmed! How could I, girl of acne, baby fat, and unruly curls, guarantee such a thing? Working at a haunted house wouldn’t be luxurious, but there did seem to be less of a chance that I might accidentally let someone drown. Scaring the shit out of people appealed to my desire to shirk responsibility for as long as I could — plus, I felt the scales needed to be adjusted in regard to how much I felt scared in the world versus how much I scared the world.

The thing is, I’d had a traumatic haunted house experience when I was eight years old. A man, who I still to this day am convinced had actually crawled from a local grave that didn’t bury him quite deep enough, followed me as I squeezed my uncle’s hand until it became a mushy sack of bones. The man whispered frightening things into my ear, and my uncle laughed while I scream-cried and punched him until he carried me out of that haunted hell into the seemingly more manageable hell of growing-up as a chubby working-class girl just outside of Pittsburgh. Needless to say, by the time I was thirteen, I was carrying a chip on my shoulder. Why couldn’t people just be nice and warn me when they were going to be terrifying or cruel? This was all I wanted — a chance to brace myself for the terror.

I thought my costume was disappointing in the light, but in the dark, it had the advantage of looking even more horrifying than my everyday look as a girl whose body was shifting into something not quite girl, not quite woman. Still, it took me a while to learn how to use it. At first, when haunted house guests entered my area, I screamed tentatively from a corner. They looked at me and laughed. As my shifts passed, I became more confident. I crouched down behind the hay in the dark, and leapt out right as people entered the room, screaming all of my teen angst and terror until the white makeup of my dead-girl face cracked. Hordes of people jumped and screamed, clutching at their friends until they realized I was harmless. This was all fake, remember? They chose to be here.

I felt a certain kind of power I had never accessed before. I was no longer the girl who was always scared; instead, I was the girl who could scare. I had always been scared of the way boys and men looked at me, so I ate until my body became fatter because I thought that might stop the looking. That, of course, didn’t totally work, but I see now how I grasped for power as a girl in the ways that I could. When my parents were having trouble paying our bills, I asked for a fake checkbook for my birthday and I taught myself how to write checks and balance a checkbook because pretending as though I could make all of my family’s problems go away with only my signature made me feel a little less terrified. Now, as a zombie girl, I finally had the power to control the reactions of the people around me.

But, by the end of my time at the haunted house, I’d learned the truth about that kind of power — and how it can turn you into someone you don’t want to become. I started stepping rather than jumping out from behind the hay, only throwing my hands in front of me in a weak attempt to appear as though I was coming for passerby. I didn’t like it when people made me feel uncomfortable or scared, and I was discovering that I didn’t really like scaring others either. Although I knew that everyone who came to the haunted house that October chose to be there, that they came because they wanted to be terrified, I couldn’t help but feel strange about it — especially after I took the zombie girl costume off and went back to being an alive girl who still had to face all of her own fears.

I left that job with more money than I’d ever had before, but the cash felt haunted. All I’d wanted was to be able to buy the stuff that would help me blend in with the other real-life girls, so I could maybe feel less monstrous than I did almost all the time. I spent the money on sweaters laced with glitter and covered in sequins, hoping to cleanse myself of something ugly that might visit me someday once again.

1. We Did Good, Billfold
2. Question Wednesday
3. What I Learned From Five Years of Writing and Editing for The Billfold
4. How a Program Assistant Dealing With a New Paycheck System Does Money
5. Classic Billfold: What I Wanted From My Move to Portland and What I Got
adolescencehaunted housesjobslife-lessonsspooky money