Throwback Thursday: My Time on the Assembly Line Working Alongside the Robots That Would Replace Us 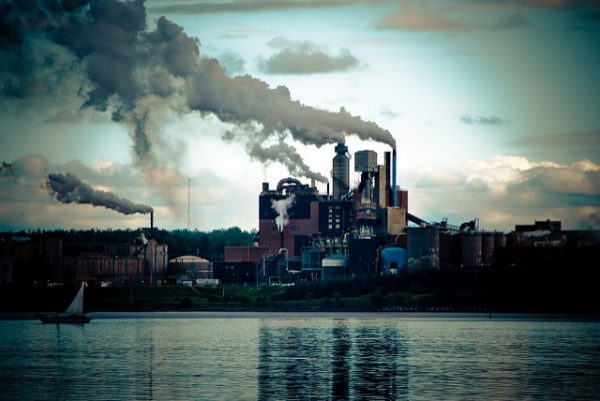 This piece was originally published on May 6, 2014.

The small town I grew up in was surrounded by factories and existed for the sole reason of supporting the local paper mill, which employed most of our residents and brought people in from outside cities. In the surrounding areas there were numerous paper mills and medical supply factories. Everyone in my immediate family worked in a factory at one time or another; some still do.

Factory jobs  —  when available  —  are relatively stable, and provide good wages and benefits. Some are in clean environments and don’t require much manual labor. As far as jobs that don’t require higher education go, working in a factory can be quite a good option.

One summer during college, I took a position at a local factory working the night shift at a medical supply factory in upstate New York that produced medical equipment and tubing used in hospitals. The factor environment was sterile and clean, and there was air conditioning. The factory employed workers year-round and assembly line workers got to sit for some of their shift. The demographic was mostly women because of the working conditions, and for the time, the wages were very good. We were also paid extra for working night shifts.

Because of the night shift schedule, this workweek took some getting used to; the week started Sunday night at 11 p.m. and ended Thursday morning at 7 a.m. We had weekends plus Friday and Saturday night off, but I couldn’t quickly switch back to a normal schedule for those two days. Toward the end of the summer, the factory had several mandatory overtime weekends, and though the money was great, the nonstop workweek was exhausting.

We were assigned a machine at the start of our shift and remained there for the rest of the night. Assembly line positions for each machine changed every 30 minutes. According to employees who had worked at the factory for many years, this 30-minute period was new. Some remembered sitting at one position for their entire eight-hour shift, and it was later shortened to changing positions every four hours, then one hour, and then to the 30-minute period during my time. Even though you’re still doing repetitive monotonous activity all night long, breaking it up into small sections was certainly helpful. There were bells that sounded for each shift, position change, and break time.

We were allowed two sanctioned breaks: a 10-minute break at 1 a.m. and a 20-minute lunch break at 4:30 a.m. These were both signaled by a bell, but you could not leave your position unless you were relieved by another worker.

Similarly, if you needed a bathroom break at any non-break time during your shift, you had to draw the attention of a supervisor to take your position on the line. It was not always easy to find one. The machine would not stop just because you had to stop.

On this particular machine there were seven positions with seven employees. There were three machines in this one giant room. When I say machine, think long tables and conveyor belts, where there were six people sitting, three to a side. There were three of these in a giant room, but two did not have people sitting at them, because those had these giant robotic arms. These were robots doing the work of six people.

I learned from other employees that back in the day, each of these three machines required seven workers. That’s 21 employees plus additional supervisors at each machine. The women I worked with remembered the room full of workers  —  their friends. They remembered being able to yell to someone at another machine, and passing jokes around the room. They painted a jovial picture of chatter among the monotonous work.

Over the years, two of the machines had robotic arms installed; one robotic arm took the place of six workers. A room of 21 assembly line workers dwindled down to 9, and the women who had been working here for years literally saw their coworkers replaced by robots.

There was another worker on the other end of the tube, and we were doing this entire process in sync. Even though each position was 30-minutes, since they were side by side, it resulted in one hour worth of gluing. This was by far the most boring position of the lot.

Aside from coordinating with the person next to you, you could practically do this blindfolded. This task took no skills and very little mental effort. I spent most my time thinking about all kinds of things, though it was often about what I wanted to make for dinner (I still ate dinner in the evening, before going to work). It was loud in the room but you could still converse with the person across from you (though not next to you). Sometimes we would have conversations; sometimes we wouldn’t. Sometimes I would ask for recipes. Sometimes I would come up with entire novels in my head, basing characters off of my co-workers. Sometimes I thought about what would happen if I glued a connector upside down.

The other two positions involved more manual energy but were still repetitive. The “coiler” part of the machine coiled the tubes so they could be packaged. The last position was to inspect the final packages, then pack and seal them into boxes for shipment. The inspection part was done outside of the machine room, where the final product was dropped off a belt into a pile in front of me. This was the only remaining human position  —  though the robotic arms handled the gluing, coiling, and sealing, they still needed a human to check for contamination and fill the boxes.

Working for the weekend

At 19, my job experience up to that point was doing manual labor or babysitting. I still hadn’t had a real desk job, and experienced sitting at a desk inside an office for nine hours a day. I wasn’t spoiled by being able to leave my desk at any time I wanted, run errands on my lunch break, or take a lunch whenever I was hungry. And didn’t know what it was like to be away from my desk for as long as I needed to, or have yearly reviews, or work on long-term projects, or feel accomplished.

There’s something strange about working on a machine that never stops, knowing that the person who replaces you at the end of your shift can do the same exact thing you were doing, and not better, because there is no better. If you show up, you’re doing great. The machine I was on required straightforward skills. Either you did your job or you didn’t; you kept up with the machine or you didn’t. No one could be an individual and just go their own way. No one could ever stand out and shine. It wasn’t possible to glue the connectors “better” than the person before you. You couldn’t coil faster than the machine allowed you to.

There weren’t any new website launches or product releases. You weren’t working to receive a promotion or build your resume. You were, literally, just working for the weekend.

Working on the assembly line of a factory, while receiving good wages and benefits, also comes with a looming threat of being replaced by robots or cheaper labor. Your skills are easily replaceable. When I was hired, the rumor was that the company wanted summer help to stock up on inventory so they could close the factory the following year and move it to Mexico, which would save them money in the long run.

That is exactly what they did. The entire factory shut down and everyone working there was laid off.

My experience working on an assembly line was very different from most workers since I wasn’t counting on that job or money for my livelihood. I remember some nights when a machine would break down or the factory would lose power and we were sent home early. People lost wages on those nights. I can’t imagine my job being replaced and shipped off to Mexico for cheaper labor. I have no idea how hard it is knowing that my friends were replaced by a robotic arm.

Leslie Beslie writes about personal finance and her experiences living in NYC. After leaving her small hometown in upstate New York, she graduated from Michigan State University before moving to Brooklyn. Now she spends half her paycheck on rent and stays home Friday nights with her cats  —  living the big city dream.

1. We Did Good, Billfold
2. Question Wednesday
3. What I Learned From Five Years of Writing and Editing for The Billfold
4. How a Program Assistant Dealing With a New Paycheck System Does Money
5. Classic Billfold: What I Wanted From My Move to Portland and What I Got
factory-workjobsrobotsthrowback thursday