Paying Out at the Ballgame 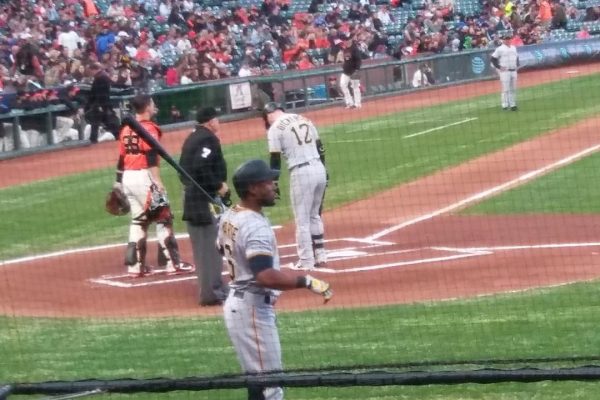 This year, I decided to attend a baseball game. When I was growing up in Western Pennsylvania, my father and his best friend used to go to Pittsburgh Pirates games at Forbes Field. After my father’s health prevented him from going to games, he never missed a Pirates game on television or radio. The Pirates were a part of my regional identity, though I’d never attended a game myself. At the start of baseball season, I checked the Pirates schedule and saw that they would make a four-game visit to San Francisco’s AT&T Park in August. But I didn’t make any plans to go.

At the beginning of August, I looked at that schedule again. I decided to go to the night game on Friday, August 10. Usually, I don’t make last-minute travel plans because I don’t want to incur the extra cost. But I needed to get away from the Sacramento heat and get my mind off of work. I was anticipating a nice, leisurely day — taking the Capital Corridor train to San Francisco, going shopping, having a nice dinner, getting to the ballpark early enough to savor my first professional sports experience (if you don’t count professional cycling), and staying at a nice hotel. After looking at prices on Hotels.com, I decided to make a reservation at one of the Hostelling International locations in San Francisco. Since the cheapest hotel listed on Hotels.com was $134 a night for last minute travel, sharing a room with three other people for $70 didn’t seem like a bad deal.

I went to the San Francisco Giants website to check out ticket prices. Since I don’t like heights and I wanted to see the action on the field, I knew that I didn’t want a cheap seat in the bleachers. I wanted to sit near the Pirates bullpen, which I assumed would also be the preferred area for other Pittsburgh fans. Those tickets ran around $139. I looked at the seating chart and wondered what to do. I consulted my friend Kathy, who lived in the Pittsburgh area. She went to games at PNC Park all of the time, so she could give me an idea on the best places to sit. Ironically, Kathy was at a Pirates game when she got my text. She advised me to check out the infield and behind the dugout. She also suggested that I look on Stub Hub for a good deal on a ticket. I was amazed at the offerings on the website. I was able to get a seat eight rows from home plate, near the Pirates bullpen for only $65.

While researching ticket prices, I went to the Amtrak website to make a reservation. There were no train seats available until Sunday. I had forgotten that there was also a music festival in San Francisco that weekend. I reluctantly made a reservation on Megabus for $21 for the 9:30 a.m. bus to San Francisco and $11 for the bus back to Sacramento on Saturday. The roundtrip on Megabus was about the same as the one-way $33 fare on Amtrak. I tried to convince myself that saving money was worth a crowded bus ride. I had taken Megabus many times, so I was sure that it would be fine.

When I got to the Megabus stop at 8:30 am, there were already four people in line. 9:30 came — no bus. At 10 a.m., someone in the now long line mentioned that they had gotten e-mail from Megabus. The train would be an hour late. Instead of getting to San Francisco at 11:30, it would be closer to 12:30 p.m. But that would still give me enough time to have a leisurely day. The bus finally arrived at 10:30 a.m., but in less than 30 minutes, we ran into traffic. The bus driver announced that there had been an accident on I-80. Since I had been up until 1 a.m. making my reservations, I soon fell asleep. When I woke up an hour later, it looked like we were in the same spot. The bus driver made another announcement. A California Highway Patrol officer had been killed in an accident and the highway was shut down while an investigation was conducted.

When we got to San Francisco at 4:30 p.m., I wowed never to wait until the last minute to make travel arrangements again. My arrival coincided with the Friday evening rush hour, so after checking into my room and unpacking my 24-year-old Pittsburgh Pirates jacket, I decided to head straight for AT&T Park.

I could feel the energy as I got close to the park. Was this how Daddy felt at Pirates games in the sixties? I was glad to see that I wasn’t the lone Pittsburgh fan in attendance. My stomach was growling, so I knew that I would be indulging in overpriced stadium food. A pastrami sandwich, fries, and a bottle of water cost $20. A large Coke cost $8. But I wasn’t disappointed when I got to my Field Club seat. Even though the plays were shown on a giant screen, I was close enough to watch the players in action. There was a net at the front of the section to protect Field Clubbers from foul balls.

Before the game started, I was given a Field Club Menu. Without leaving my seat, I could order any thing from a $6.25 Giants Hot Dog to an $18.50 Crazy Crab Sandwich. Adult beverages started at $11.75 for a beer and went to $16 for a Screwball. Each item on the menu had an added $3.50 administrative charge for In-Seat Service, so even the lowly hot dog would cost over $10 after a tip was included. Throughout the game, vendors walked up and down the aisles, selling peanuts, popcorn, cotton candy, churros, and ice cream. The evening faded into a clear night, a relief from the smoke-filled skies I’d been experiencing in Sacramento. Even though the Pirates lost 10-13, I enjoyed my first baseball game.

During the game, I noticed that a man sitting in the next aisle over was wearing the same jacket as I was. As we merged into the same aisle after the game, I mentioned it to him. I told him that I had bought my jacket 20 years ago. He laughed and said, “You got it when you were six?” The compliment made me chuckle, in spite of the long day that I had experienced. When the Pirates visit San Francisco next year, I plan to be there. But I will definitely pay for everything far in advance next time.

1. We Did Good, Billfold
2. Question Wednesday
3. What I Learned From Five Years of Writing and Editing for The Billfold
4. How a Program Assistant Dealing With a New Paycheck System Does Money
5. Classic Billfold: What I Wanted From My Move to Portland and What I Got
experience seriesnever make last-minute travel planssports