The Cost to Clothe a Minimalist Family of Five 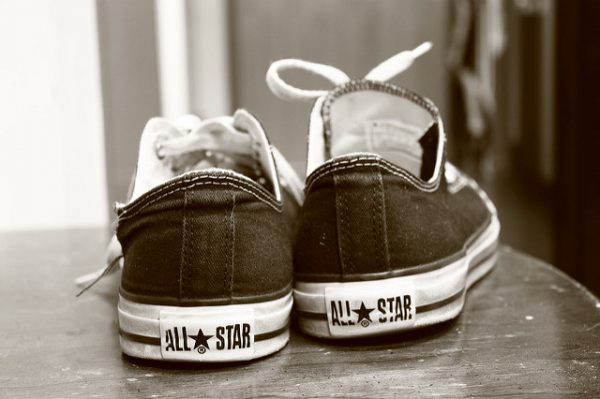 A common misconception that comes with being a frugal family is that people think we’re poor. Well-meaning friends offer us bags of used kids’ clothes, and extended family gift us hip clothing fit for the coolest preschool Instagram models. We donate a lot of what we’re given, and the clothing we keep is shared among our three boys, ages 4 to 6. Otherwise, we try to keep our clothing expenses minimal and our kids looking somewhat presentable. As for us parents, we buy the clothing we need and some of what we want.

Over the past year, we have spent just under $400 on kids’ clothes. Our biggest expense was $97 for three winter coats from Target, which we had to buy after leaving Southern California for the face-freezing weather of Ohio. We expect the coats to last at least another year, maybe longer if you count the hand-me-down bonus.

We “splurged” on Old Navy T-shirts, socks, and underwear for the boys. These came to about $60 after using the employee discount I received while working at the Gap for two miserable weeks. We also spent $30 on jeans for our two oldest kids, thanks to a sale we happened to catch at The Children’s Place. Imitating animals while on cement soon caused the jeans to rip, but they have since been converted to cut-off shorts for the summer.

The rest of the funds were spent on sneakers. This is what happens when kids use their shoes as bike brakes. I’m not foolish enough to buy any celebrity-endorsed footwear — Baby Jordans are the second biggest child-related ripoff behind teething necklaces — but I did buy four pairs of basic Nikes from Nordstrom Rack at a total of $145. I would have obviously liked to pay less, but I’ve found the cheap superhero shoes that kids prefer don’t even last as long as the movies on which they’re based.

My wife, Amber, led the family in per-person clothing spending at close to $350. A good portion of the money ($100) was towards new bras from Victoria’s Secret, understandably required after breastfeeding for five years. The rest went to yoga pants and underwear from Target ($60), a couple pairs of pants from T.J. Maxx ($40), a pair of shoes ($50), various T-shirts ($50), and one “cute outfit” ($30).

Amber was primarily a stay-at-home mom during the year, though she did substitute-teach a couple times a week. She used to teach full-time, so she still had a good number of educator-chic outfits to wear. (She may have also had some other clothing expenses that we do not speak of. I remember a couple of small autopayments withdrawn from our account to pay for a T.J. Maxx rewards credit card. I didn’t pry; I just convinced myself that she had secretly bought gifts for me.)

I worked remotely, usually in just a bathrobe and skull cap, which cut down on my clothing expenses. I spent $30 at Marshall’s on underwear and socks, which was a pretty good value. In fact, had I known you can get, like, 120 pairs for such a low price, I would not have waited 10 years to replace my drawers. I also bought a pair of the penny-pincher’s ultimate shoes: Chuck Taylors ($40). They go with just about any outfit and they’re machine-washable, but if you want to go full hipster you can just wear ’em dirty.

The only other clothing items I purchased during the past year were a pair of possibly leather Ben Sherman shoes from T.J. Maxx ($30), along with a “club shirt” for partying in Cancun ($30) that I found at Uniqlo. I regret buying the Ben Sherman shoes; they squeak on almost every floor on which I’ve walked. (Well, besides the floors at T.J. Maxx.) The club shirt was a good score. Since Cancun I’ve worn it to a few high-end lounges and it was prominently featured in my Facebook profile photo.

According to the Bureau of Labor Statistics, the average American family spends about $1,800 a year on clothing. At around $900, we’re nowhere near that… for now. I anticipate our clothing expenses will increase as the kids get older and fall victim to peer pressure and marketing hypnosis. (God forbid they become sneakerheads and ask to buy tens of iterations of the same damn shoe.) But it’s not just the kids. I’m due for a new pair of desert boots, which usually last me for about four years, and another chambray shirt — a staple of my five mix-and-match outfits.

I’ve also been trying to convince Amber to buy a pair of high-quality leather boots from Saks Fifth Avenue — although maybe the Saks outlet store would be a wiser choice. Before our trip to Iceland two years ago, she found a cheap pair of duck boots on Amazon for less than $40. They leaked as soon as she hit a puddle and twice failed to prevent her from falling as she ran to see a geyser erupt. Also, I’m sure she’ll want some new shirts. I’ve shrunk at least three of them by attempting to fit every single piece of household clothing in one wash-and-dry load.

Either way, we’ll buy clothes that last and reduce costs in the long run. If I keep shrinking clothes, I may even end up with a few outfits to hand down to the kids.

Dewan Gibson is a pleasant guy who brings a lot to the table. He blogs about travel, parenting, and personal finance at DewanGibson.com.

1. We Did Good, Billfold
2. Question Wednesday
3. What I Learned From Five Years of Writing and Editing for The Billfold
4. How a Program Assistant Dealing With a New Paycheck System Does Money
5. Classic Billfold: What I Wanted From My Move to Portland and What I Got
clothingclothing seriesfamilyfrugalparentingthe-cost-of-things