The Billfold
Under Where?

The Cost of Upgrading My Underwear Drawer 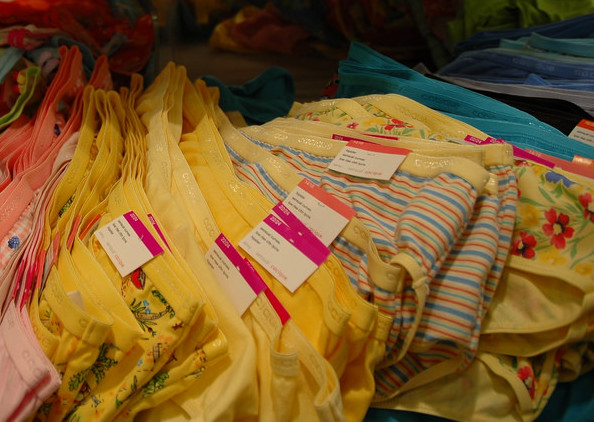 The last time I bought panties, I was 21 years old and La Senza had thongs on $25 for 6. That was four years ago. I’m ashamed to admit that until last fall, my top drawer was still home to underwear that I bought in high school. I knew that my wardrobe would change as I grew up and moved from university classrooms to offices, from house parties to cocktail parties, but I never gave my under-wardrobe much thought.

While getting dressed for a fancy dinner about a month ago, I slid on a rumpled pair of Jockey panties that came in a three-pack from a department store. The whole tone of my outfit, a pretty 70s-style floral embroidered dress, was destroyed because, underneath, I could feel the frump and see the lumpy fabric bunching under the translucent skirt. I realized that it was time to throw down some cash on new skivvies, preferably ones without ice-cream cones on them. As I picked at the flapping elastic of my half-a-decade-old panties, I couldn’t help but wonder: how much should a grown woman spend on underwear?

My underwear generally does a lot of heavy lifting. It’s constantly experiencing friction from heavy fabrics like denim and wool. My bras are receptacles for under-boob and armpit sweat, plus residue from my deodorant. It’s impossible to expect a garment made out of thin, cheaply sewn cotton to last for more than a year. But is good-quality underwear worth it? Even if I spend more than $4 on panties, they’re going to inevitably encounter a period stain I will then scrub to death, causing more wear and tear than an average spin in the washer. I have 32B-size boobs and I stopped wearing underwire bras two years ago, opting for a rotation of three bralettes I bought when I was 19. In an ideal world, I would wash all of my bras by hand every week, but more often than not, I forget about them for a couple of weeks — during which the oils and skin left on them really have time to settle in. Inevitably, I get a little lazy and those delicates make their way into the washer.

The most expensive pair of underwear I own cost me $82 CAD (about $62 USD) plus $13 shipping, from Rachel Blodgett’s Santa Rosa-based brand Serpent + Bow. Far from an impulse purchase, I’d been eyeing this pair of hand-dyed indigo, high waisted panties for years. I felt justified in making this purchase because the underwear is a statement piece that I get to privately revel in. This pair of underwear is extra special because it’s ethically made and produced by an artist I really admire. It rounds out many of my magical self-care rituals. But I don’t want to spend that much on every pair of panties in the drawer.

Underwear sits in a category firmly between “Shopping” and “Personal Care” in my budget spreadsheet. I try to be really specific about what fits into the “Personal Care” category, to avoid overspending on essential oils and medicinal herbs at the health food store. Every single time, underwear stumps me: I need underwear (insofar as it’s a habit that society enforces), but I also want it. Bare-necessities underwear would mean grabbing a four-pack at the drugstore and filling my underwear drawer with panties that end up losing their elasticity pretty quickly, causing that decidedly un-sexy butt pouch effect. On the other end of the scale, the underwear I want, the ones I lust over on Instagram from brands like New Zealand-based Lonely Lingerie, are about $55 CAD a pair plus shipping.

I asked two of my friends, whom I’ll call Sophie and Maddy, how they navigate their own underwear budgets. Maddy, who wears a Victoria’s Secret 34DDD, sees underwear as both a necessity and a luxury. Because her cup size is nigh impossible to find in regular retail stores, she’s relegated to dropping upwards of $100 for a custom brassiere — and that’s the starting price for a “nude” bra that isn’t even cute and lacy. Moving around without a bra can be painful, especially at high speeds, but wearing the wrong bra can also be dangerous. “I had these grooves in my shoulders from bra straps,” Maddy told me, “and my back was in so much pain.” Her solution: sports bras from TomboyX, where a three-pack of their athleisure-inspired Essential Soft Bra runs $54 USD.

Sophie and I spent our adolescent years circling the tables at Aerie during their 10 for $30 sales. Most of the panties that I’ve thrown away in the last year have come from Aerie. There was something pathetic about sliding those faded, distended S-sized briefs featuring scarf-clad polar bears over my now L-sized bum. Sophie encouraged me to return to Aerie, as they’ve headed in a more minimalist, sophisticated design direction with fewer cartoon characters.

Since neither of us have a lot of disposable income, it’s really important to both Sophie and me to buy items that are going to stay cute and comfy for a long time. We share skepticism about handmade underwear, which is honestly not always what it’s cracked up to be. Brands like Pansy Co. look great on certain bodies on Instagram, but I question the stability of the zigzag stitch they use to finish their panties’ elastic edges, especially at the $50+ price point. I recently purchased two bras from a local clothing company that uses the scraps from their larger garments to make bralettes. The bras cost $35 each, but some of the seams are getting a little loose — and after a couple months of washing, they’re already looking lumpy.

Maybe Justin Bieber has the right idea — if the rumors are true, he throws his Calvins away after just one wear. Perhaps underwear was never really made to last. If that’s the case, I want to work on anticipating the cost of the turnover of my delicates drawer in a more proactive way. Maddy reminded me about underwear subscriptions, like the one MeUndies offers. Keeping a flow of underwear coming in on a regular basis ensures that you don’t have to blow a bunch of money on one shopping trip; instead, underwear is automatically a monthly expense. As older underwear is taken out of service, there are consecutively fresher pairs ready and waiting in rotation. This inspired me to begin replacing my underwear stash piece by piece rather than purchasing cheaper panties in bulk. $20-$30 a month is an easier pill for me to swallow than a guilt-ridden $150 bill after a frustration-fueled online shopping spree. Undies can be added in to the budget as more of a body-utility bill.

Underwear mostly happens between me and myself. I want my underwear to be pretty and functional. I want it to make my body look and feel good under my clothes. I want underwear that doesn’t show itself under light or thin fabrics, that doesn’t ride up my butt when I walk briskly to catch the bus. I want underwear that makes my partner’s eyes widen, just a little, when they see me undress. That’s a tall order for one article of clothing, so choices will have to be made. Buying a few pairs of new underwear on a regular basis will allow me to check in both with my aesthetic needs and with my body — which is slowly but surely beginning to look more and more like my mother’s. Ideally, this strategy will lead to purchases that will actually serve my boobs and butt and keep the cost-value scales balanced in my budget’s favor.

Keagan Perlette is a writer living and working in Vancouver, BC. Follow her on Twitter at @keaganperl and find more of her writing at keaganperlette.com.

1. We Did Good, Billfold
2. Question Wednesday
3. What I Learned From Five Years of Writing and Editing for The Billfold
4. How a Program Assistant Dealing With a New Paycheck System Does Money
5. Classic Billfold: What I Wanted From My Move to Portland and What I Got
clothingclothing seriesshoppingunderwear