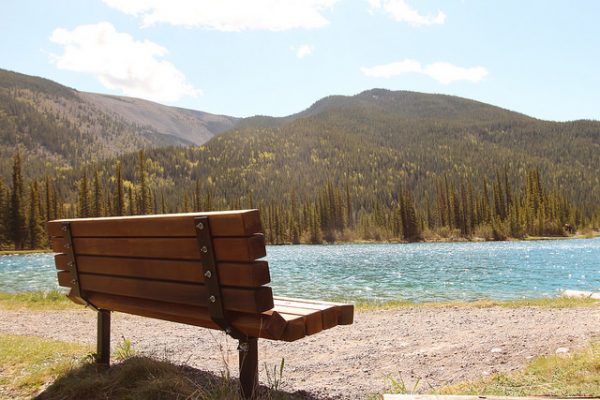 Photo credit: Thank you for visiting my page, CC BY 2.0.

Kassidy (not her real name) is a public service employee and former lawyer in her early 30s in a big city in Canada.

So, Kassidy, how much are you making?

I make around $100,000 a year, but with pension it’s closer to $110,000. I also have steady income from investments (i.e., dividend income) and high-interest savings account interest worth about an extra $12,000 or so. (These figures are all in Canadian dollars.)

Nice! I have a lot of questions about your income, so I’ll start with… PENSION?!

Yes, DEFINED BENEFIT PENSION PLAN! The sweetest phrase right after “all you can eat pizza.” It’s one of the advantages of working for the government, and a fast-disappearing perk. Don’t know how long it will last for, but I hope for some time. I’ve only been in it a few years, and I’m a ways away from retirement.

I was just reading somewhere that a pension is technically deferred earnings, which means they can’t take it away from you — because you earned it! Although we all know that isn’t necessarily the case.

There’s always a risk, but given that I work for the government and the plan is associated with public service, I’m hoping the risk is relatively low. It would be a big ship to sink, though not unheard of. It’s a huge job advantage that I took into account when I took this job.

I came from private practice law where the up-front compensation is excellent, but the lifestyle and retirement options are much less appealing. You don’t see the pension money up front (and you contribute as well, so it’s about 10 percent matching in essence), but it’s there and it’s growing without you even thinking too hard about it.

I’m going to ask you about your career shift in a minute, but first I want to ask about your dividends and interest income.

I know that it takes a lot of money to bring in all of that interest, so… how large are your portfolios and savings accounts?

In the range of $500,000. The bulk of this is from an inheritance received over 15 years ago that was invested in two blue chip financial stocks, one of which has more than tripled in the years following and which pays off very high dividends. The dividends were not re-invested, but were withdrawn to pay for school expenses, etc.

I totally acknowledge how lucky I am in this regard to have this nest egg.

The rest are invested in low-cost ETFs. And then I have a down payment in cash in a high-interest savings account with 2.3 percent interest. My husband and I are saving for a house but we’re not that interested in delving into real estate right now.

My other cash is in another high-interest savings account earning about 2 percent, which is a promo rate that I call every three months to get.

I’m one of the Millennials with more than $100,000 due to family money, for sure. It’s a very privileged place to be in, and I know it’s given me a lot of choices and advantages.

Let’s talk about the choice to switch from law to public service, then. Was that something you always wanted to do? I know that “make the big bucks in law and then move to public service” is a common path.

It was always in the back of my head. Private practice life can be an excellent training ground, intellectually stimulating, and a great career path for those who thrive in that atmosphere. You generally know early on if you can see yourself becoming a partner. I knew going into that it likely wasn’t the path for me, and this was confirmed very quickly. I did it for about three years before looking elsewhere. In the process I went from an income of about $130,000 down to around $80,000.

How does your income compare to your expenses?

I only consider my employment income when calculating my income, and use what I can earn as my baseline in making budgeting decisions.

I’ve tried to resist lifestyle inflation, but I have my moments. Acknowledging again that I definitely come from a place of privilege, I know I could “afford” something ridiculous like a $20,000 Birkin bag, but that’s not an arms race I’m willing to enter.

Where do you spend your money? What’s your living situation like? I’m assuming you don’t have any debt to pay down?

$1,800 in rent for a charming and creaky rental unit in a duplex. The cost of that is “split” with my husband. We still haven’t combined expenses and keep big expenses separate, and switch on and off with groceries, etc. very loosely.

No debt, the dividend income went to school expenses.

Law school in Canada is not nearly the same financial commitment as it is in the U.S. In total I think my tuition was around $50,000 for the three years. Again, dividend income and family support contributed to that. Iin my second and third year I received a few merit scholarships based on my grades. I lived at home during law school (and after, for a few years) which kept expenses down significantly.

Got it. You mentioned lifestyle creep earlier — in what ways have you improved/increased your spending over time?

Lifestyle creep is a THING!

When I was a new corporate lawyer I remember a very kind and grounded senior litigation associate co-opted the end of the “intro to litigation” presentation he was giving to give us a ten-minute lecture on golden handcuffs. He warned us that as we entered the profession we’re going to start getting catalogues for fancy cars, and custom suit places will call you on your office line to offer you custom-tailored suits. All this proved to be true. He urged us not to fall into the trap of lifestyle inflation so we wouldn’t feel trapped and could make choices. That stuck with me.

I think another thing that has been influential in my life is that, quite frankly, I grew up financially comfortable. My parents raised me and my brothers relatively simply. We all had retail jobs. We worked for allowance. Public school. No designer clothing. They paid for our education, but when I wanted to go to overnight camp because my friends went, I was told it was too expensive. They kept us very, very grounded in that regard.

So in a weird way, and particularly so as I’ve gotten older, I know I could have expensive things if I really wanted them, but I don’t.

Also, I don’t know if it’s counter-intuitive to say this because the logic is not sound, but in my former profession and in my life I know people who are very, very wealthy. There is always something better and shinier and more expensive out there. I try to focus on things that are reasonable and give me a lot of happiness.

In terms of increasing spending, I spend more on vacations now. It’s probably more of a factor of getting older, and working so you value your downtime more. Direct flights, and maybe the second cheapest room in a hotel rather than the cheapest. If you asked me five years ago, I literally did not know getting a nicer room than the basic room was an option. I still usually get the cheapest room except when we’re in Europe, where that room is basically a pod. (POD!)

Pod hotels sound cool at least! The cheapest room in a European hotel is an inadvertent pod.

Bah, I should have known this question was coming! I really liked that the first question in the NY Times Financial Tuneup that you did was about first determining your values. Values are your compass in the crazy world of finance.

The world is like built to sell you things, or a lifestyle. And you face a lot of choices in your career, earning potential, home, etc. Everybody will have opinions on what you should be doing with your money and how you should spend it. Try to compare yourself against your goals and your former self, not other people.

1. We Did Good, Billfold
2. Question Wednesday
3. What I Learned From Five Years of Writing and Editing for The Billfold
4. How a Program Assistant Dealing With a New Paycheck System Does Money
5. Classic Billfold: What I Wanted From My Move to Portland and What I Got
doing-moneyinterviewslawlawyer