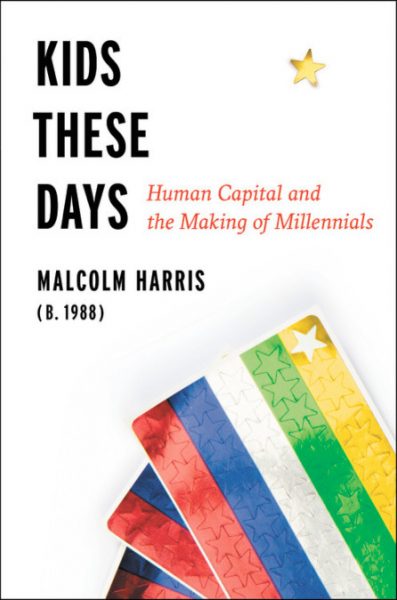 Where do I even start with Malcolm Harris’s Kids These Days: Human Capital and the Making of Millennials — which I finally got to read and VERY MUCH RECOMMEND? It might be best to say that even though I already knew a lot of the information presented in the book (I was born in 1981, after all) I still loved it.

A jump in the number of students with Harvard-caliber skills doesn’t have a corresponding effect on the size of the school’s freshman class. Instead, it allows universities to become even more selective and raise prices, to populate their schools with rich kids and geniuses on scholarships. This is the central problem with an education system designed to create the most human capital possible: An en masse increase in ability within a competitive system doesn’t advantage all individuals. Instead, more competition weakens each individual’s bargaining position within the entire structure.

Those last two sentences are essentially his thesis, and if you want to read about all of the ways in which this increase in competition, ability, and human capital — aka the amount of monetizable work a human can produce — have made it harder for the Millennial generation to find financial and social stability, you are probably going to love this book too.

Harris breaks down the way the educational system strips as much cash out of Millennials as possible, the way the workplace strips as much work out of Millennials as possible, and the way that the government — and the prison system – keep Millennials in line. On the one hand, you have universities writing letters to the Department of Labor asking them to avoid taking action against illegal internships (since students are paying those universities for the privilege of being unpaid employees), and on the other hand, you have school administrators and police reducing the labor pool by disproportionately targeting young people of color:

Before a young person can compete to accrue human capital, they have to be part of a free society. The police exist in part to keep some people at the margins of that free society, always threatening to exclude them.

Kids These Days is full of those kinds of sentences — the mind-blowing ones that flip your understanding of the world just slightly. I knew that my generation was the first to do less well than its parents, but I didn’t know that “being under thirty-five is now correlated with poverty wages.” I knew that today’s children have to start training at impossibly young ages if they hope to be professional musicians/athletes/actors, but I didn’t know that “for parents doing the math, turning an athletically or a musically gifted toddler into a prodigy might be cheaper than four years at a competitive private school.”

If there’s one flaw to Kids These Days, it’s that word “Millennial.” Harris notes in his introduction that the Millennial generation encompasses people born between 1980 and 2000, but he also includes examples of the stresses and challenges facing today’s children (the ones born well after 2000). This creates an unnecessary correlation between Millennials and youth, and — as I love to remind people — a lot of us are in our thirties now. There’s nothing about how Millennials are parenting their own children, nothing about Millennials handling mid-career transitions, nothing to suggest that Millennials are anywhere near middle-aged. Even the book’s title implies we’re all still kids.

But hey — maybe Harris will write a sequel.

1. We Did Good, Billfold
2. Question Wednesday
3. What I Learned From Five Years of Writing and Editing for The Billfold
4. How a Program Assistant Dealing With a New Paycheck System Does Money
5. Classic Billfold: What I Wanted From My Move to Portland and What I Got
billfold book reviewbooksmillennials