I’ve Lived in Three Different Apartments in the Same Building. Here’s Why. 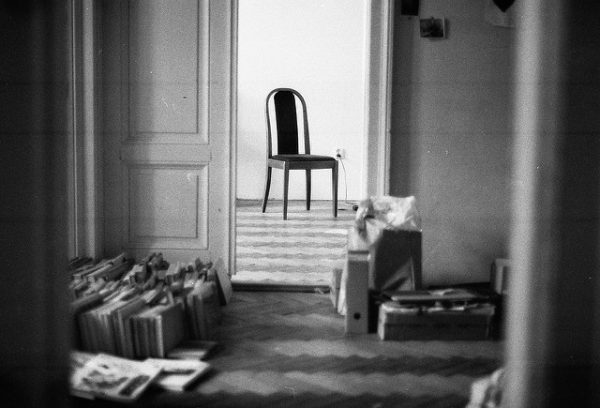 In 2011, I embarked on a young person’s rite of passage: living alone. As I entered my new apartment building, which housed my very first studio space, I had no idea I wouldn’t be leaving for seven (hopefully eight) years.

That’s an exaggeration, of course: I’m no Little Edie Beale, with headscarves made of pants and dozens of cats. (Though I have one cat, and I admire Little Edie’s fashion sense, but that’s a whole other story.) I work, play, live like any other city dweller.

I’m not even in that same studio apartment anymore. Two years ago, my lease wasn’t renewed because my management company had been systematically remodeling. I ended up taking another apartment in the building (one I actually ended up liking better than the place I’d called home for five years), even though I knew that it was up for remodel in exactly one year, and I’d be forced to move again. When it came time? Yes, I took a third apartment in the same building. For one year. This spring, I’ll be moving again – if all goes right, still within my building, and I’ll be able to stay in the new unit than a year this time.

Why have I done this, you ask? In a large city that’s teeming with places for rent, why have I chosen to live in the exact same space (that is lovely and convenient, but far from perfect) year in and year out?

I love my neighborhood, and more importantly, I feel safe there.

I’ve felt at home in this particular area of Chicago since my freshman year of college, when I went to a They Might Be Giants concert at a local venue with my then-boyfriend. Chicago is a city of neighborhoods, each with its own particular flavor, and at the time I was living on campus, about as far north as you can get without going into the Evanston suburb. I loved school, liked my neighborhood fine, but it was here that I finally felt at home. The people were funky and cool and everywhere, even late at night. There were weird local shops and movie theaters and neat little restaurants. I grew up in a small town and this was the exact experience I’d envisioned upon moving to the city.

The next year, my boyfriend moved to this same neighborhood, so I spent a lot of time there and I loved every minute. Though we eventually broke up and I moved away for graduate school, I never forgot my love for the neighborhood. When I moved back to the city to start my working life, I knew just where I wanted to live.

I lived with roommates in two different apartments throughout the neighborhood, and when I ventured out on my own, I fell in love with my current building. As a writer, theater critic and performer, I often get home at very late hours, and living on a busy street corner means there’s always activity. Of course, no area is one hundred percent safe, but it’s comforting to know I can call for help and many people will hear me. Also, there’s a 24-hour Walgreens directly across the street that has saved me more than once, especially when I’m sick and/or low on groceries. Many of my friends say they couldn’t put up with the constant noise that comes with living in a high-traffic area, but for me, that’s the city, and that’s home.

Apartment hunting is not my jam. When I first moved back to the city, my then-roommate and I found our place in one morning (we went with an apartment rental service, and picked the second of three places the leasing agent showed us). When that roommate moved to LA, I ended up living with a mutual friend who already had a place and was also losing his roommate. I have friends who absolutely love the thrill of the apartment chase, the suspense in waiting to hear from landlords, the weighing of pros and cons. As much as I wish I were one of those people, I’m not. While I do have certain requirements for my living space, I’m also inclined to go with one of the first apartments I see.

When it comes to actual moving: for someone who despises packing and unpacking, I’ve done it an awful lot in the past few years. You know what makes the whole moving process easier? Moving within your building! I tend to block out one day to transport smaller things like clothing on my own (I also get my cardio in), and then I hire movers for furniture and other heavy items. My management company tends to be more understanding and give me a bigger window for moving, so I don’t have to deal with the in-and-out rush (which is especially beneficial because I live in a walk-up).

Perhaps the biggest advantage, however, is transporting my cat, who absolutely freaks out when she is outdoors (and I have the scratch marks to prove it). My beloved Versace barely has time to yowl when her transport time is 30 seconds across the front lobby — and then she’s right in her new space, with new smells and places to explore, hide and play.

I’m not opposed to change. Since moving into my first studio apartment, I’ve changed jobs, career focus, and hair color. I’ve become a published, professional writer and have accommodated my day job and schedule accordingly. I’ve even dived back into doing theater after a decade-plus hiatus. I’m all for change, especially when it’s positive. That said, my life has changed so much that I like to have a bit of consistency: my home.

I adore my management company, who are communicative and understanding. I’ve heard so many landlord horror stories from friends; I’m not eager to explore that territory on my own. I like knowing where the laundry room is and when it’s typically slower and quieter. I like that my cat has the same busy street view from our windows. I like that my gym is literally around the corner and a branch of the amazing Chicago Public Library is just two doors down. I like seeing the same people every day, knowing what local coffee shops I like best, and I really like the new grocery store that sprouted up last year.

While I’ve changed, my beloved neighborhood has too. Rents have gone up (of course). New people have moved in, others have moved out. Even my building continues to undergo remodeling, though I’d argue it’s retained the initial charm that drew me in. With all this in mind, my little corner of Chicago feels just as homey as it did when I was a naïve college freshman so many years ago. As long as I can afford to, I’ll keep living where I feel the most me.

Lauren Emily Whalen lives in Chicago, and if she has her way, she will never leave. She is the author of the YA novel SATELLITE and writes erotica for Bellesa and reviews for Chicago Theater Beat. Learn more at laurenemilywrites.com.

1. We Did Good, Billfold
2. Question Wednesday
3. What I Learned From Five Years of Writing and Editing for The Billfold
4. How a Program Assistant Dealing With a New Paycheck System Does Money
5. Classic Billfold: What I Wanted From My Move to Portland and What I Got
apartment-huntingmovingmoving seriesrentingstability