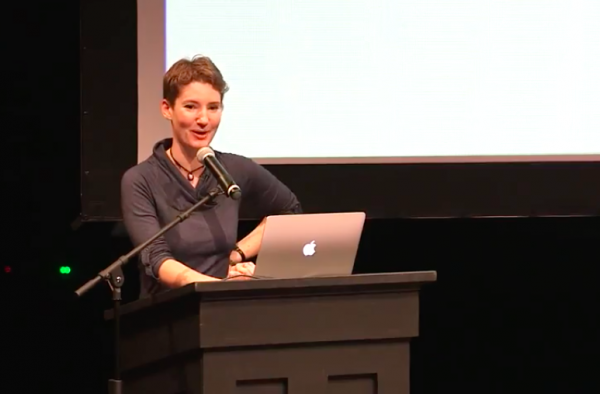 Lucy Bellwood giving a Creative Mornings talk (that I highly recommend) about building a life that includes your creative passions.

Last month, Lucy Bellwood’s “Homeward Bound: The Art of the Sailor” went viral. The artwork—which you can view and purchase at Buyolympia or INPRNT—features a sailor covered in tattoos, along with a glossary of what each tattoo represents. (“A single anchor told that the sailor had crossed the Atlantic or was a Merchant Mariner.”)

This image was created in 2013 for the Vancouver Maritime Museum and went viral in October when Boing Boing posted the image to their website, after which it was shared by Chris Hadfield, George Takei, and more.

Last Friday, Bellwood wrote up a list of all the major websites and social media accounts that shared her image, the number of people that liked/commented/responded to the image, and the number of prints she sold.

October 27th, 2017: Atlas Obscura (985k Facebook fans) picks up the story from My Modern Met. The next day George Takei posts about it. He has 10 million followers on Facebook, give or take a couple hundred thousand. The post gets 16 thousand reactions and five thousand comments. Many of my friends tell me I am now famous.

You might remember that The Billfold interviewed Lucy Bellwood back in May, in which we discuss the way she does money as an independent artist as well as her decision to be financially transparent and share her earnings/expenses with her fans.

Now, she’s being financially transparent about the realities of going viral. I’ll let you read the whole post on your own, but spoiler alert: views, likes, and comments don’t necessarily translate into sales.

1. We Did Good, Billfold
2. Question Wednesday
3. What I Learned From Five Years of Writing and Editing for The Billfold
4. How a Program Assistant Dealing With a New Paycheck System Does Money
5. Classic Billfold: What I Wanted From My Move to Portland and What I Got
artcreativityfreelancinggoing virallucy bellwood