How I Got This Job: Stilt Walker 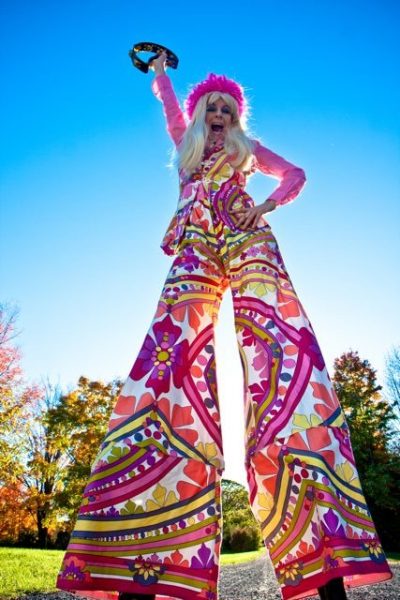 How on earth did I end up working as a stilt walker for 21 years?

I stumbled into it. No pun intended. I was dating a juggler who had the grand idea of starting a novelty act: a folk music band on stilts.

Being a guitarist and singer, I was recruited to join this seven-piece musical circus. Half of the band were experienced stilt walkers with some musical background and half of us were musicians who were blinded by the lure of a gig that paid about 8 times what it would pay if we were standing on the ground.

There was of course the issue of learning to walk on stilts. Right. I hated every second of being on those things. I trained on “drywall” stilts, which weighed about 15 lbs each. They are terrifying, extremely unnatural, punishing metal extensions to have attached your legs when you are performing music in front of people.

Not to mention I am scared of heights. I have no skills or background remotely related to stilt walking, and never had any interest in circus or variety arts, even as a kid.

But the New Years Eve 1996 gig we had booked in the Hartford Civic Center paid $350 per person. For one set. That was an unheard-of payment for me, an unheard-of rock musician.  I dutifully attended rehearsals, involving a long bus ride all the way from NYC to The Berkshires. I forced myself to walk around practicing on those drywall stilts, indoors and out.

We were preparing for the big New Years Eve gig when our band, Giraffe, was approached by the producers of the New York City Halloween Parade. Not just to be part of it—but to walk and play our music before the parade started, all the way down 6th Ave.

Halloween night arrived. I could barely breathe, I was so terrified. The costume was uncomfortable. It was cold. The very last thing I wanted to do was walk down 6th Ave at dusk on stilts, with my guitar.

We stilted up, tuned up and began our march.  The throngs of people could not have been more responsive. We may as well have been The Beatles. It was a magical, surreal hour: thousands of camera flashes going off, shouts of encouragement, screams of delight from all directions.

We were larger than life, and fused with the heightened unreality of the city on Halloween.

By the time we got to 23rd street where the parade terminated, I was as happy as I can remember ever being.

I had intended to do only a few gigs with this lot. It’s now 21 years later.

The Giraffe Stilt Band did a few more gigs that earned us around $2,000 a show.  Back then corporations could afford an entertainment budget for this type of novelty act. We eventually disbanded when the economy slowed and the budgets shrank accordingly.

The romantic relationship with the juggler didn’t last, but he kept throwing worthwhile bookings my way and encouraged me to expand my repertoire. He taught me to twist balloon animals, which is an important skill to have if you want to get on the family party circuit. I developed half a dozen costumes, learned face painting and 15 balloon animal shapes, bought a used car, and before I knew it I was making more than half my living as a stilt walker, or “Multi Talent.”

I’ve performed in the homes of some the wealthiest people in the world. Once, I chatted with one of the groundskeepers of a luxury estate in Connecticut who disclosed that the holiday lighting alone on the property cost around $100,000. The family had 12 homes around the world. Al Gore had personally stopped over via helicopter during his campaign. I never learned the family’s identity, nor did I meet the birthday child, as I was just one of dozens of performers hired for “atmosphere.” At one memorable Manhattan bar mitzvah, the boy was raised onto the stage by a powered dais emerging from below. His name was printed on the dollar bills circulating at “his casino.” His initials formed several ice sculptures. There were over 30 performers including a full band, dance troops, The Harlem Globetrotters, an aerialist, Austin Powers along with a little person impersonating Mini-Me.

I asked one of the two stage managers if they knew the cost of this event. She said she couldn’t disclose that—but mentioned that a memo had circulated indicating the client had requested “not to go over one million dollars.”

That is just for the specialty entertainment. Not the venue or the band or food, booze or anything else.

I have also performed in the least glamorous environments: shelters, schools in underprivileged neighborhoods, and hospitals. I’ve worked in facilities where children with mental and physical disabilities live out their lives. We’re hired to go in, sing a few songs, make a balloon, tie it to the bedpost.

At one facility, the children appeared to be unresponsive. “Do you think they even know we’re here?” I asked an aide. “Yes, they know you’re here,” she answered.

At a cancer benefit in Union Square, I remember handing a little boy a blue sword, the #1 favorite balloon for boys. He didn’t have any fingers on his hand. I attached a sword balloon to his wrist and went on a break to sit and cry.

Yes, we are in the business of entertaining humans of all ages, of all kinds. Most of our work environments are overwhelmingly festive and upbeat. We are to be found wherever there are Ferris wheels, popcorn, cotton candy, inflatables with kids jumping around, jugglers, fire breathers, music, magicians, ice cream, balloons, sunshine, party food, decorations, and painted faces. We are the people who turn an ordinary Saturday into a special event.

That is the best part of my job. When I am hired, it’s usually for a grand celebration—and sometimes, to lend a moment of silliness and joy where there otherwise would be none at all.

I am a pop rock songwriter and guitarist, but this unexpected line of work turned out to be more rock & roll than rock & roll. How many times have I washed off the neon glitter from my face to get ready to play a rock gig after a stilt gig? Rock music is a genteel, mature, even conservative environment by comparison.

All the guys I meet at work are clowns. My co-workers are hardworking entertainers who show up with a smile and leave their bad moods at home, and how I love them. These folks, mostly comedic actor types, have exceptional levels of endurance, work ethic, and energy, always bringing high spirits and laughter. Our dressing rooms ring with jokes and corny one liners.

The agents that book these events are also a joy to work with. They are a trustworthy and friendly bunch, most of them started as performers so they look out for us. They are loyal to their stable, try to negotiate good fees—never less than $100/ hour—and they pay promptly.

Now here it is, almost the end of 2017, and I’m trying to quit this racket. Hey, it was just something I did on a lark 21 years ago. I’m not really this silly!

But I don’t know if I can stop. I’m a professional Smile Transmitter. Thousands of smiles get beamed up to me when I am up on those stilts. I store them up and they resonate for days. I miss it so terribly when I don’t work for a few weeks. I have come to love, even depend on, the magic the kids bring to everything.

As I write this, an agent called to book me for a St. Patrick’s Day parade I’ve stilt walked in for the last 10 years in Woodbridge, New Jersey. But I am trying to quit! I’m way too old for this! That parade is always the first outdoor job of the year in the spring. Crocuses will be coming up, there will be kids dressed as leprechauns, everyone will be throwing candy around. I love the fellow stilt walkers I’d be working with, and the whole town is always in a terrific mood.

Should I do it?  I’m torn. I’m REALLY trying to quit, have my weekends back, clean the glitter out of the car, focus on other opportunities, save my back, skip all that driving, do something more…reasonable! I said I’d call back.

I waited two hours, then I called. I took the gig.

Bibi Farber is probably on stilts right now. To see Bibi’s resume and her complete line of costumes: bibionstilts.weebly.com. For her music and more writing: bibifarber.com.

1. We Did Good, Billfold
2. Question Wednesday
3. What I Learned From Five Years of Writing and Editing for The Billfold
4. How a Program Assistant Dealing With a New Paycheck System Does Money
5. Classic Billfold: What I Wanted From My Move to Portland and What I Got
careershow I got this jobstilt walker