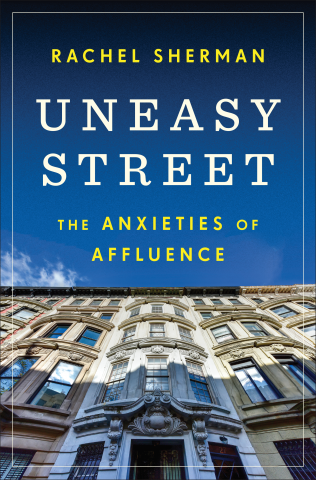 Last month, we looked at a NYT essay called “What the Rich Won’t Tell You.” (That’s the one where the woman took the labels off her bread so her nanny wouldn’t know they were spending $6 per loaf.)

The essay was adapted from Rachel Sherman’s book Uneasy Street: The Anxieties of Affluence; I put a library hold on a copy right away and was finally able to read the book this week.

It’s… I’ll just say that the essay was better. Unlike, say, Evicted: Poverty and Profit in the American City (which I reviewed last year), Uneasy Street isn’t written as a narrative. Instead, it’s divided into chapters based on different aspects of wealth and insecurity, and each chapter is written almost as a list: this person thinks this, that person thinks that, this family spends this much, that family spends that much.

It’s hard to stay connected to what ultimately turns out to be a series of interview responses, although I did notice that certain themes kept rising to the top of the conversation. More than one interviewee worries that they don’t have enough money to cover major healthcare costs, for example. Many people worry about privilege or appearing privileged (which are two different things), and many people wonder whether they’re giving enough resources (financial or otherwise) back to the larger community.

Other people are less interested in giving back. One interviewee equated paying taxes to charitable spending, because his money was going to help the less fortunate. (You can almost hear the aggrieved “my money” in his comments.)

If you are interested in “how the 5 percent think,” you’ll find a lot of perspectives to consider. The chapters on interpersonal dynamics, e.g. how breadwinner/homemaker couples manage money or how parents attempt to teach their children that not everyone is as privileged as they are, are the strongest; the chapters where people list how much they spend are less so.

I’m pretty sure that theory doesn’t just apply to the 5 percent.

1. We Did Good, Billfold
2. Question Wednesday
3. What I Learned From Five Years of Writing and Editing for The Billfold
4. How a Program Assistant Dealing With a New Paycheck System Does Money
5. Classic Billfold: What I Wanted From My Move to Portland and What I Got
billfold book reviewbooks