The Various Costs of Toddler Transportation 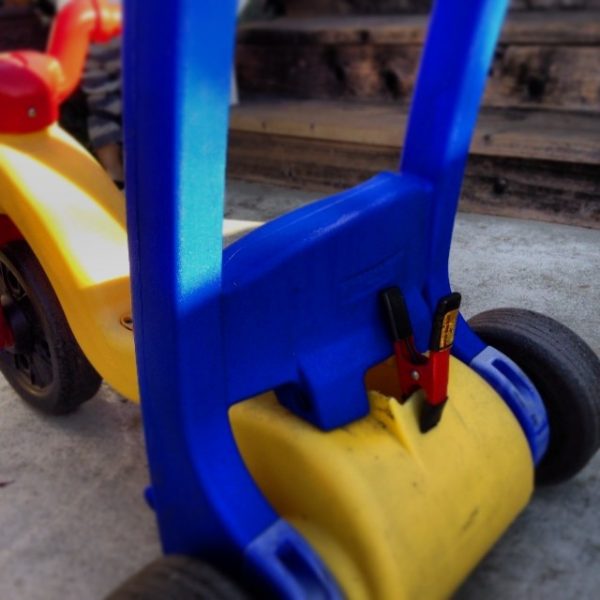 Not long ago, I wrote about the various costs of toddler entertainment—now I’m going to delve into the wonderful world of toddler transportation devices.

Like many young ones his age, the discovery of Sid’s legs is the best thing that’s happened to him so far. Rather than walk at a leisurely pace, Sid loves to jog or sprint everywhere, his little legs like chubby pendulums. Most of the time he doesn’t look where he’s going—and sometimes, he even busts out a high-octane moonwalk, which usually ends in an epic stumble or tumble.

Seeing him walk, run, climb, rummage, explore, and pull all the pots and pans out of our freshly arranged kitchen cupboards is a genuine joy—and the good old fashioned pushchair (aka stroller) is fast becoming redundant. Of course, as Sid currently has what I like to call a kamikaze sense of hazard awareness, the pushchair is still very much an essential item when it comes to venturing outdoors safely.

But, that doesn’t always mean he likes it. In fact, just last week, when I tried to pop him back in his pushchair after the park, Sid sprayed me in the eye with his beaker of water like a vexed elephant cub, sending me stumbling into the fence. Although it smarted a bit, it was strangely refreshing. However, the point is the pushchair is often seen as the enemy.

So, in an attempt to diversify the ways I transport Sid to various places, I’ve tried a few popular alternatives…

Sid looks cute and cool in his backpack reins, especially as they are dinosaur-themed. Not only this, but there is space for his nappy changing stuff, some moisturizing cream, a snack, and a beaker of water. Very practical indeed.

The only problem is that I like to keep the reins slack for safety, just to keep him from wandering into the road, avoiding tugging on them completely. But Sid likes to do what I’ve coined as the boomerang-double-bluff.

When we’re strolling down the road together doing our best Reservoir Dogs impression (you know, that scene where they’re all walking along in slo-mo), Sid stops in his tracks for no reason at all. Just when I think he’s stopped to marvel at something in the street, he turns and darts in the other direction, usually towards harm’s way, hence the boomerang element of the bluff.

As a result, I end up running after him, scooping him up and walking back the other way with him kicking and protesting. I love the reins for the freedom it offers Sid—but more often than not, it takes three times longer to reach our destination than it should, and there are a few tears involved.

Ah, the tricycle. It’s been a work in progress, but now that Sid trusts it, this device is genius. Not only is his toddler trike safe and full of storage pockets, but it’s essentially a pushchair in disguise.

The tricycle offers Sid the freedom to pedal with his little feet while I steer, allowing him to explore the world in a far more panoramic fashion than his pushchair. He smiles and babbles and giggles at almost everyone he meets (unless he’s peckish, in which case he become very impatient), spreading his brand of fresh-faced joy all around town, which is priceless.

Also, not long ago, he got so excited while whizzing around the local nature reserve on his trusty steed that he shouted the word cheese, or as he likes to say it, “shhhheeeeeesshe”. I’m not sure what cheese has to do with riding around in a trike, but it was a triumph to hear nonetheless. Plus, he does like cheese.

When I first tried to put Sid in the hiking backpack, he got so upset that he ignored me for the rest of the day—and, as I attempted that ill-advised pursuit at 7.30 a.m., it was a long day, a long day indeed. But, much like the tricycle, now he loves it. In reasonable doses, anyway.

I think the backpack is great as Sid is attached to my back at my height, meaning we can laugh and joke and converse at close quarters while soaking in the scenery together. The only problem is if I use the backpack to run errands with Sid or for general transportation purposes, he gets frustrated as he wants to run free on ground level. Once, he felt so strongly about being set free that he fired off a dirty protest which was unpleasant for all involved—my back was incredibly warm for the duration of the walk, too.

That said, when we go somewhere scenic like the Staffordshire Moorlands, Trentham Lake or the local canal for a leisurely stroll—which usually concludes with Sid running around in a field or garden or park—it’s perfect. It’s a great way for Lynsey and me to interact with Sid, pointing out various sights, landmarks, and wildlife. Recently we took it to Cornwall, and in those three days alone, the backpack paid for itself five times over. Sid loved it—and down there, the scenery is out of this world.

All in all, every piece of apparatus has its plus points, and it’s been a joy testing them out and finding out what Sid likes best—even with the dirty protests and the occasional tears, each moment has been well worth it—and that in itself is priceless.

Plus, if Sid gets tired after all that walking, running, tricycling, and sightseeing, he has a nice, comfy pushchair in which to take a nap.

1. We Did Good, Billfold
2. Question Wednesday
3. What I Learned From Five Years of Writing and Editing for The Billfold
4. How a Program Assistant Dealing With a New Paycheck System Does Money
5. Classic Billfold: What I Wanted From My Move to Portland and What I Got
parentingtoddlers