The Cost of a Cheap Pedicure 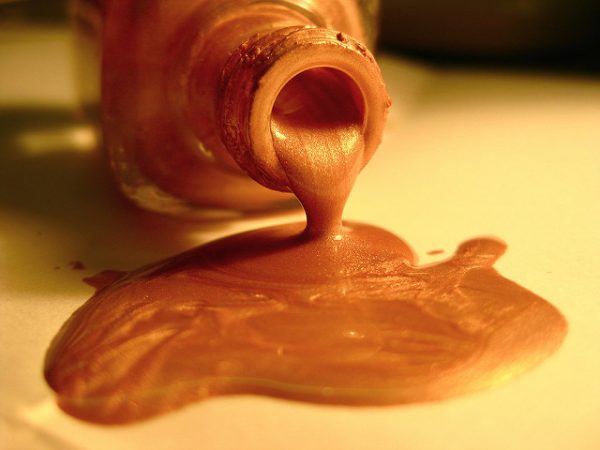 Me: Do you autoclave your tools?

I didn’t want to seem rude but I sucked it up and asked because I’d read all the beauty mags that said you just had to.

It was the last cheap pedicure I’ll ever get. Labor Day weekend, 2009. I’d just graduated with an MFA in fiction and had just enough “mad money” for a cheap pedi, since my Dad had slipped me two twenties just before he and Mom got in their car to head home. It was Dad’s last road trip.

I got the cheap pedi in exactly the kind of place you picture. Let’s call it Happy Fun Nails. It was in between a gas station and a deli. It had a bamboo plant and waving-cat statuette on the counter. Fake Nagel prints on the walls.

I watched as the pedicurist lifted my feet from the sudsy footcuzzi and placed them on the footrest. I watched as she unwrapped the sterilized tools from their sealed bags. Reassured, I leaned back in the massage chair for some more shiatsu-ing.

I didn’t think about my toes much over the next two months because I was teaching Comp 101 at a community college. Teaching comp, when I factored in the eons of grading, plus the hour-long commute each way, paid about $3 an hour.

A veteran teacher who had an extra room took pity on me and let me stay with her a few nights a week so I could skip the commute. On one of the worst days of my life, I dumped my briefcase on her guest room floor, stripped off my blazerly vestige of authority, and climbed under the covers in my underwear to watch movies. Let’s call it “Netflix and fetal.”

How long, I wondered, could I keep standing in front of a room full of 19-year olds? My Dad and Mom were so proud of me for being a “college professor.” But I was just an adjunct. And my dread of public speaking made adjuncting feel like bungee jumping off a cliff with a fraying bungee—four times a day, three days a week. But I needed the money, so I was going to have to go back and do it all over again the next day.

I let my worried, wearied mind rest there in the TV-blue dark. My husband wasn’t there to say, “Stop picking at your feet,” so I didn’t. I felt for the ache that could be rubbed, the overgrown nail that could be peeled from the corner of a swollen toe, just like I’d done in my old retail days before I had a spouse to bear witness to this gross habit. Ahh.

And that’s when I noticed the rough patch on my left big toenail—shit, what was that? I switched on the bedside lamp so I could get a better look. Yep. Fungus.

Doctor: Did you ask if they autoclaved their tools?

Primary cost of getting toenail fungus = $255

Four years later, I still had fungi, plural. I’d left teaching for technical writing so I could “splurge” on the laser treatment that my health insurance wouldn’t cover but which might actually work to kill the fungus.

“You know, “ the nurse at the Laser Spa said as she lasered my toenails, “Fungi are really hard to fight! Rub Vicks VapoRub on your feet every night to keep it at bay. And don’t ever get pedicures at those places with the footcuzzis! Those things are full of fungi!”

One bottle of Vicks VapoRub: $5

Secondary cost of getting toenail fungi = $580

Q: Why did the mushroom get invited to all the parties?

My father was not often a fun guy. But how funny he looked the first time he wore that pair of blue and yellow Nikes.

What’s funny about Nikes? Nikes on Dad were like—there’s no simile ludicrous enough. Dad didn’t wear “tennis shoes” like a child because he was a man. He was a mechanic and a biker. He wore motorcycle boots or steel-toed work boots, twelve out of every twenty-four hours, five out of every seven days, 52 out of 52 weeks a year.

But then the doctor told him if he ever wanted to get rid of the fungus on his feet, he’d better let ’em breathe. So he wore the Nikes on the weekends but on Mondays the work boots went back on. The fungus grew like it was being paid to from 9-to-5 every Monday through Friday, and Dad’s yellow, gnarly toenails soon defied clippers. When he’d cut them, we kids said “Gross!” We also said “Bird ankles!” every time he wore those Nikes and his skinny, pale ankles showed out from under his jeans.

We didn’t dare tease Dad about much but for some reason he would stand us teasing him on these two things. He laughed with us at himself in that Goofy laugh he did. Hardy-har-har!

Forty years after those Nike days, my Dad would get bone marrow cancer. The treatments that cured the cancer— chemo and a bone marrow transplant—worked a cruel game. They gave him an extra two years, a crucial two years in which his grandchildren grew to know him, but they weakened him so that he spent a good part of that time in and out of the hospital with pneumonia.

The summer of 2012, my husband, my sister, my brother, my niece and nephew, and I visited Dad in the nursing home where he was recuperating from his most recent bout of pneumonia. None of us knew he would die just after Christmas that year. “You’re looking good,” we said. He surely had another year in him, we hoped. But his bare feet lying on top of the covers! My God! We knew he had fungi but it’d been years since we’d seen his feet. His toenails were scaly, grayish-yellow, gnarled into fantastically torturous vortices.

“Owee?” My four-year old nephew broke from my sister’s arms to stand at the end of the bed and tenderly lay hands on Dad’s right big toe.

“Uuuh!” We all inhaled. What would Dad say?

The way my Dad called my nephew honey, a word he’d never used on us kids when were little, the way he patted my nephew’s head, it broke my heart and healed it in the same second. That second showed me that, in contrast to his hardening nails, Dad had grown softer as he’d grown older, maybe as soft as those old Nikes were when he finally threw them out. I wasn’t the only one who had to turn and sneakily wipe the tears from my eyes so that our still proud father wouldn’t mistake our love for pity.

The chemo and the bone marrow transplant gave us those two precious, pneumonia-dotted years with Dad. The chemo and the transplant drugs were also a boon to the fungus on his toenails, guaranteeing a fleshy paradise that would last right up to his cremation.

Eight years after that cheap pedi, five years after my father’s death, my own fungi lives on. My fungi is not nearly as epic as his was. For now, it’s a patchy whiteness that seems to disappear if I remember to Vicks my toes every night. But still, my fungi is a formidable enemy, one which, unless I want nails like Dad had, I’ll have to fight until I die.

Reminder of own mortality = $0

Tertiary cost of getting toenail fungi = $23,400 (not counting inflation)

Dear reader, take it from me: Never get a “cheap” pedicure in a place with a footcuzzi! More important, remember that you, and everyone you love, will one day die—not necessarily in that order. Remember all the skills you learn, all the money you earn, even your own dear body, the good health that is the truest form of wealth, you will one day leave behind. So love the noble struggle. Love it all.

JS Burton lives in Colorado, which is a great place to be a writing, running, and craft-beer loving nerd. She is a recovering spendthrift who would like to thank The Billfold and the “money people” in her life for helping her to see the financial light.

1. We Did Good, Billfold
2. Question Wednesday
3. What I Learned From Five Years of Writing and Editing for The Billfold
4. How a Program Assistant Dealing With a New Paycheck System Does Money
5. Classic Billfold: What I Wanted From My Move to Portland and What I Got
familyfungihealthlife-lessonsnever get a pedicure in a place with a footcuzzi