Every Job I’ve Ever Had: Waitress, Tech Support, Disney Receptionist 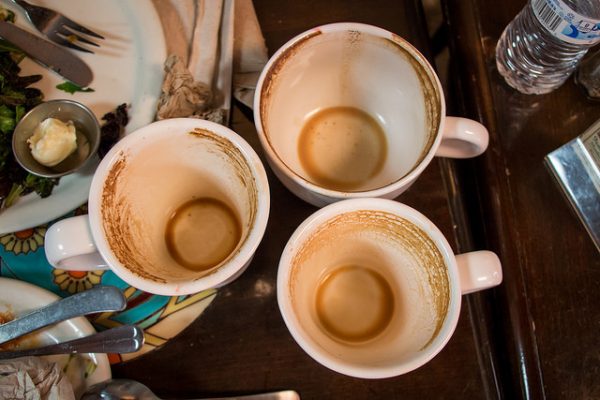 For my junior prom I had my heart set on a $350 dress that my parents rightfully didn’t want to buy. So I spent the spring semester working at a small restaurant in town—so small that I was also the hostess, the busboy, and the dishwasher. I learned that I am, quite possibly, the worst waitress in the world and should forego all attempts to make money this way in the future. The owner took money out of our check if the register was off at all, which I’m still not sure is legal. I quit as soon as I had the money for my dress, and to be fair, it was really beautiful.

During my senior year, my uncle bought a new car and gave me his old one, and the freedom of finally having a car went to my head. So much so, that it apparently didn’t occur to me that the more I drove the car, the more gas I would have to buy to put in it. Once again, I was tasked with finding a job to pay for the things I wanted and was reminded that being an adult was and continues to be awful.

I was offered two jobs at once—one was at the photo center of CVS and the other was at The Icing (Claire’s for teens, if you aren’t familiar). Based on no other factors aside from the fact that The Icing was in the mall and I thought that was cool, I chose that one. Because I was 18, unlike some of the other cashiers, I was allowed to open and close the store by myself. Also because I was 18, I was not at all mature enough to handle responsibilities or having to work on Christmas Eve, so I quit the week before. But not before a secret shopper, who happened to be the regional manager, came in and screamed at me for not giving each customer a basket for shopping, which I maintained was an obnoxious thing to do.

This was my work study job my first and only year in college. I spent my shifts wandering the gorgeous, three-story, 100-year-old library shelving books and listening to music on my headphones. I absolutely loved it. To this day, if I listen to Death Cab for Cutie or Dashboard Confessional (the official bands of college freshmen), I can practically smell the building and its books.

The financial crisis of 2008 hit the south pretty hard, and for a lot of complicated reasons, I wasn’t able to continue my college education. Instead, I was thrust into the real world with rent and a power bill that was overdue more often than not. I started working at a call center doing internet tech support and was surprised to find I was actually pretty good at it. I hated it, of course, but I was good at it.

I worked for about a year and a half helping people with internet connection issues (did you turn it off and back on?), problems with their email clients (did you know people still used Outlook Express?), and occasionally phone and cable complaints. Unfortunately for me, my growth in skills and experience never led to growth in pay, and I left for the promise of a bigger paycheck.

I started at a new company doing tech support, just as I was doing before, but I was quickly promoted to an open project manager position. I’ll never know if the attention and praise I received there was because of my work or because I was the only female under the age of 60 in a company full of tech guys.

Either way, if I wasn’t ready to be a key holder at a retail store at 18 years old, I certainly wasn’t ready to manage multi-million dollar projects at 20. I worked long nights and weekends and rarely took a lunch. The pressure of my biggest client (a 500-location transportation company) was too much for me to handle, and I quit with no job lined up. It was the first (and last) time I have ever done that.

When I left my project management role, I grasped at any job I could find. This led to a three-day career as a debt collector that you might remember from my previous Billfold posts.

I decided to go back to school to get my degree, and I worked two part-time jobs in the process. Three, if you count the ambassador work-study program I did 5 hours a week.

Half the time I worked in the Copy & Print department of an office supply store printing wedding invitations and “lost cat” flyers. I couldn’t work any of the machines properly and the customers hated me. The other half I worked at the county library, surrounded by literature and literature lovers. The semester was a disaster, and I eventually turned to the library alone to make ends meet. Honestly, if the job paid better, I would have been content to stay there forever.

Now that I was back in school, I decided to apply for the Disney College Program and move to the House of Mouse. I spent a year and a half working and playing at Disney World. The pay was abysmal, but the perks are what kept me (and all the other workers who needed more money) from leaving. In the time I was there, I worked at two different hotels and picked up shifts at others on occasion. My shifts were split between working at the front desk and checking guests in and out, greeting curbside arrivals, and being the hotel runner. In the latter, I delivered packages and floral arrangements to rooms. Since Animal Kingdom Lodge’s hallways are half a mile to the end and back, my legs were in the best shape of my life.

That brings us to today. I work for a small company doing social media, writing, SEO, and online advertising, and then in my free time I write for incredible places like The Billfold and Paste Magazine! It’s been a long journey, but I finally love what I do. It’s hard to have any complaints about work that gives me an outlet for all of my interests, no matter how obscure. I get to write about TV, culture, relationships, and of course, money.

I don’t regret any jobs I’ve had in the past, but it was unquestionably not the path I thought my life would take. Whatever route I needed to take to get here, writing for and talking to strangers about things I love, is exactly the route I wanted.

1. We Did Good, Billfold
2. Question Wednesday
3. What I Learned From Five Years of Writing and Editing for The Billfold
4. How a Program Assistant Dealing With a New Paycheck System Does Money
5. Classic Billfold: What I Wanted From My Move to Portland and What I Got
career historycareersevery job I've ever hadjobs