The Five Money Questions We Answered Before We Got Married 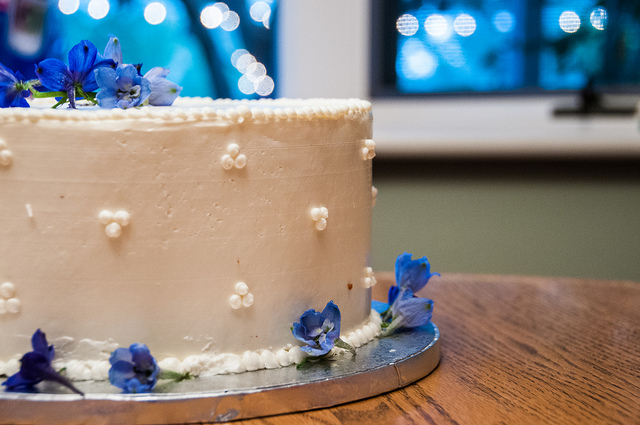 When my partner and I decided to get married, we didn’t ask our parents for a blessing or go see a spiritual adviser—we went to see a financial adviser.

David and I had heard that one of the leading contributors to divorce in America is disagreements about money. We had both grown up in less than ideal financial conditions and didn’t want the stress we had seen on our parent’s marriages affect us in the same way. We wanted to lead a life of joy, moderation, and charity, rather than an unfortunate sequence of booms and busts.

David’s parents divorced when he was young and his mother raised both David and his brother as a single parent for much of his life. His father contributed little beyond child support and was mostly out of the picture. David watched his mother try to emulate the lifestyle of upper middle class families, but without the same means and discipline to personal finance. Within a few years of the divorce, there was substantial debt.

As for me, I had grown up in a lower-middle-class family that always struggled to make ends meet. In my adolescence, our town’s textile industries were shuttered by globalization. My dad would be forced into early retirement due to a hereditary eye disease, and my mother would lose her job during the recession.

We both had wonderful, enriching childhoods with loving parents who wanted the best for us, but we knew that coming from families with tumultuous financial situations made us far more likely to repeat these same mistakes. As soon as we left home for college, we began doing everything we could to find good (and sometimes multiple) jobs so we could start saving. We saw our peers rely on their parents for support in those early lean years; without that kind of safety net, we would have to bootstrap our own way to economic stability.

When we got engaged several years after leaving undergrad, I was making about $50,000 while living in Washington, DC. I lived an incredibly frugal life, always preparing for an emergency that might come and set me back to square one. I had paid off my student loans within a year of finishing grad school, and had managed to save about $15,000.

David was making around the same, but had no savings, some minor credit card debt, and considerable student loans. He was also regularly sending money to his family and paying some bills, but the requests were growing each month, particularly as the recession worsened. This strained not only his relationship with his family, but began to place stress on our own relationship—how could we build a stable foundation for our own future if he couldn’t establish healthy boundaries with his parents?

After getting engaged, we were meticulous about budgeting for our wedding, so about 6 months before the big day, we sat down with a free financial adviser from our bank, USAA, to talk about long-term planning. It was… difficult… to lay bare our facts and figures to a stranger and to each other, but answering these questions out loud gave us a firm understanding of our financial picture, our newly shared financial goals, and our own spending habits.

1. Did we want to join our bank accounts?

The answer was yes and no. This one was tough for me, being in the better situation financially at the start of our marriage. We decided to have joint bills and savings accounts, as well as two separate “fun money” accounts to which the other would not have access. We set up two savings accounts—one for an emergency fund where we would work to save least 6 months of costs, and another for long-term savings that we could draw down as we needed for irregular expenses, like travel or car repairs.

2. What were our long-term financial goals?

Honestly? Our only long-term goal was not to be broke or financially vulnerable ever again. I’m not sure that our financial adviser had heard this answer before. I suspect most people say that they are saving for a home, or for future children, but for both of us, the goal was much simpler: acquire stability.

We divided our monthly income this way: 50 percent to bills, 40 percent to savings, 10 percent to fun money. Even as our incomes have increased, we still follow this methodology, which we believe helps keep our priorities focused. We also track our progress at least once a month to see where we’re improving and where we can make adjustments.

3. If something happened to one or both of us, would our spouse or other members of our family have the financial support they needed?

Without kids or non-financial assets in the picture, we decided to take a more conservative approach to life insurance. Although our bank recommended both universal and term life insurance, we ultimately chose to purchase only the latter, in addition to minor policies offered through our work benefits packages. If something happens to one of us, the other one would have a solid nest egg to see them through their immediate financial situation and be able to give philanthropically in a way that honors their spirit. If something happened to both of us at the same time, our families would be taken care of as well.

4. What was our risk tolerance for investments?

Although I would prefer to squirrel away money in mason jars buried in some hidden location, David can see a bigger picture in which our money multiplies for us based on smart investments with stable track records. To split the difference of our risk tolerances, we decided to double down on the amount of money in our emergency fund and savings, then use the monthly remainder to take greater risks in the form of index-fund investments.

5. What do want our lifestyle to look like when we retire?

Being in our early 30s, David and I have a tough time imagining our own retirement while we’re still so focused on seeing our parents through to theirs (more on that another time). As for us, we decided we are comfortable with a modest life in our golden years, one in which—once again—we are simply not broke. With that in mind, we have maxed out our employer 401(k) matches and we check in annually to determine any adjustments needed. For now, we take no small amount of pleasure watching that intangible safety net grow.

Because we have determined we are unlikely to have children, we’re more focused on making sure we are well cared for in our old age no matter what our health may be, which may mean we need to discuss long-term care insurance or annuities at some point in the future.

Five years in, this early conversation with a financial adviser has served us well. Although we may occasionally quarrel over the odd expense, having a shared long-term vision for our financial future has given us an important foundation.

And whether you’re already married or just beginning to have those conversations with a partner, it’s never too late to begin.

1. We Did Good, Billfold
2. Question Wednesday
3. What I Learned From Five Years of Writing and Editing for The Billfold
4. How a Program Assistant Dealing With a New Paycheck System Does Money
5. Classic Billfold: What I Wanted From My Move to Portland and What I Got
financial advisersmarriagemoney and relationships