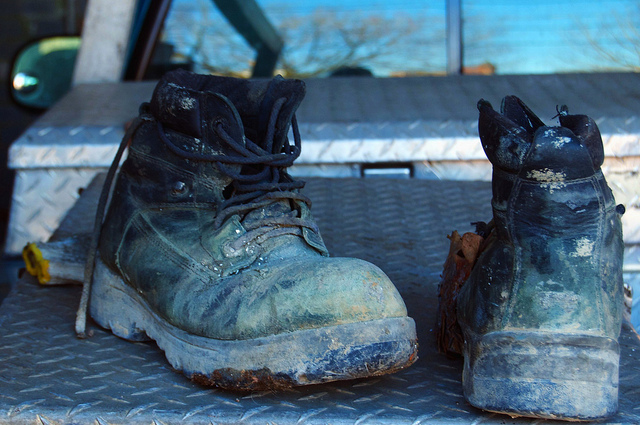 A little over two years ago I was a recent college graduate, starting a job I hoped would be the first step on a path to financial success. Here’s the catch; the job I was starting didn’t require my degree. Instead, I had applied through a temp agency to work for an automotive factory. I would spend the following months pressing, punching and welding steel car parts.

This was not the life I had once envisioned for myself.

Manufacturing, particularly automotive manufacturing, dominates central Kentucky, where I’d gone to college—but blue collar work is seldom seen as a path to prosperity. Instead, it’s considered a fallback. I was flouting conventional wisdom when, despite my bachelor’s degree, I pinned my hopes on a blue collar job.

But I had a plan. (Finally.) After I graduated, luckily without student loans, I’d stayed in town because it was easier than leaving. A bout of post-graduation aimlessness ensued. I considered grad school but it seemed like a way to put off earning a living and I’d been a broke student long enough to be sick of it.

The prospects for employment that my liberal arts degree afforded didn’t seem much brighter. Classmates who moved across the country to manage summer hotels or corporate Facebook accounts were lucky to earn $30,000 a year. My school occasionally hired its own graduates for entry-level office jobs, a practice which seemed less like nepotism and more like cannibalism after I heard what they paid.

By then I’d learned that I could easily double that income at the factory, which was located just a few miles from campus. It employed about 1,300 people and was constantly hiring, because employees were just as constantly quitting in a random but broadly predictable pattern, like radioactive decay.

There was no mystery to the high turnover; people quit because the job, even by industry standards, was considered grueling. Working 60–80 hour weeks in a hot, loud, and dirty environment was the norm. This included 10–12 hour shifts Mondays through Saturdays, and often 4–8 hours on Sunday as well. Fully half of all new workers didn’t last two weeks. But, thanks to overtime pay, those who stayed (and made it past temp status to be company hires, a process that took me three months) could expect to earn $1,300 or more a week, as well as health insurance, life insurance, and PTO.

For many employees, this was a way to support a family, albeit one they barely saw. I, however, envisioned a stepping stone to financial freedom. I formed my plan: I would work and save for two years, from the end of April 2015 to the beginning of May 2017. The goal was to save at least $40,000 dollars, which I would then use to start a business.

I set up a savings account and deposited a predetermined amount of each biweekly paycheck. I made my own food, for both health and budget reasons, but I didn’t have the energy to cook after an 11-hour shift. So I invested in some freezer containers and once a month I’d spend a few hours and a few hundred dollars making a thirty-day supply of soups, stir-frys and casseroles.

The rest of my moneysaving strategy was simple: I did not spend. Draconian as it may seem, I tried to limit my expenses to four categories: rent, utilities, groceries, and transportation.

Ironically, the exhausting nature of my job made it easy to embrace austerity. I was consigning two years of my life to drudgery, which was not a choice I made lightly. The payoff had to be worth it.

I even stopped buying new clothes, except for pants I could wear to work. The company provided logo-stamped shirts, and, since steel-toed boots were mandatory for safety, we were given a free pair each year as well. I saved these boots for some further adventure, since I had already provided myself with Navy surplus clodhoppers—the heaviest and most indestructible footwear I have ever encountered. They lasted the whole two years, although I grew to hate putting them on so much that I fantasized about creative ways to destroy them when the two years were up. (Throwing them over a cliff, maybe, or mutilating them with a razor.)

But every day I put my boots on and went to work. I never called out, and if I could volunteer for a Sunday or holiday shift, I did. Before I started the job I had been worried that, in spite of my determination, I wouldn’t make it. Numerous others had found the job unbearable.

In reality, it turned out to be like many other physically or mentally demanding ordeals. It is bearable; you just really don’t want to bear it. Showing up every day was half the battle. The bigger concern was the fear of losing a few fingers to a machine, which my orientation class was informed had actually happened to a worker the week before I started. They said it was his fault, of course. (Despite the company’s insistence on the “over-riding priority” of safety, accidents resulting in permanent mutilation, usually of the hands, seemed to happen on a regular basis.)

There were other hazards. Forklifts scooted recklessly around corners. Sparks from welding machines sometimes set fire to the grease-soaked mats which, for obscure ergonomic reasons, covered the floor of our workstations. I always managed to stamp out the flames before they set my pants on fire.

But the greatest threat to our well-being was simply the heat, which in summer reached up to a hundred degrees on parts of the floor, causing profuse, constant sweating. Gulping water under such conditions is instinctive, but anyone who forgets to supplement electrolytes can easily end up sick.

In some ways, though, I actually got healthier—or at least fitter. Hiking had been my preferred form of exercise, but it was no longer necessary since I spent most of each shift in motion, walking sideways between machines or lifting and stacking tubs of metal parts. My biceps gradually became visible, although at first I didn’t understand what was happening, as I’d never seen them before.

I had also worried that I would face a hostile, sexist work environment. Manufacturing is stereotypically masculine and, where I worked, women were outnumbered 4 to 1. Of course, this is not merely a blue collar issue. The demographics would not have been much different had I ended up in one of those STEM jobs which are a more recognized route to wealth. And I did get the impression that the company policy on sexual harassment (zero tolerance) was supportive.

I could have chosen to invoke that policy against a person I’ll call Patrick, who occupied a position in the complicated supervisory hierarchy of the factory which made him my boss, but a very minor boss. After getting my phone number on a work-related pretext, it took him exactly nine days to escalate a work-related series of texts into a proposition for what might politely be termed a sexual act involving himself and me. (I cannot explain this behavior, unless he thought it would work, which seems absurd.)

I was having none of it. I spoke with some co-workers who agreed that showing these texts to HR could severely modify his career, but as it turned out, the mere threat sufficed. Patrick was meek and polite for the rest of my time at the factory. Though, needless to say, no one should be subjected to such treatment, the outcome felt more empowering than demeaning. I will admit that it seemed like cosmic justice when a few months later Patrick was bowled over by a rogue forklift. (He recovered.)

As the day of my release approached I even found myself regretting that it would all be over so soon. This might have stemmed from fear of the unknown; if all went well I would soon have to start my own business and set my own schedule. Part of it may have been heat-induced Stockholm Syndrome. Also, I realized that for some reason I had started to take pride in my work.

I got pretty good at it. As the end approached I started working harder, setting new records for cap-and-loop production and then breaking them. I guess I wanted to be remembered, when I was gone, as the best cap-and-loop welder of all, the one who got away.

It’s not like that, though. Workers are replaceable, and there was no fanfare when I gave two weeks notice. My supervisors seemed sorry to see me go, but they didn’t try to talk me out of it. Just another quitter.

They didn’t know, of course, that I wasn’t really quitting. I had done exactly what I set out to do. I’ve started my business, and surreal as it seems, I’m finally self-employed. But when it came to destroying my work boots, as I’d so long dreamed of doing, I had a change of heart. I put them on the top shelf of my closet, in case I ever need to remember what I did to get where I am now.

Elizabeth Lieser is a freelance writer, entrepreneur, and ex-factory worker located in central Kentucky, the land of horses and bourbon, only one of which she can currently afford.

1. We Did Good, Billfold
2. Question Wednesday
3. What I Learned From Five Years of Writing and Editing for The Billfold
4. How a Program Assistant Dealing With a New Paycheck System Does Money
5. Classic Billfold: What I Wanted From My Move to Portland and What I Got
jobssaving-money