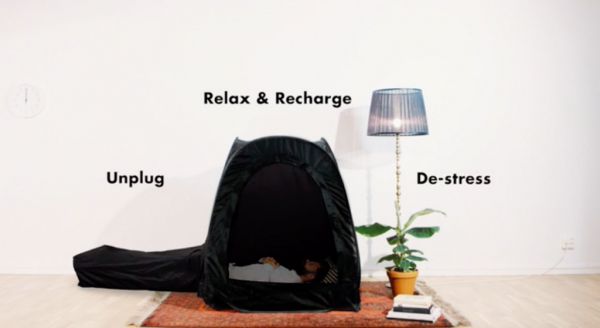 One of my very earliest Pod Stories was about a man who was trying to rent out human-sized boxes that people could place in their overcrowded apartments to make additional space for roommates.

Is This San Francisco Man Living In a Box, or Sleeping In a Custom-Designed Pod?

The city ended up shutting this guy down because his wooden pod boxes were fire hazards. However, the idea that you could create a new private space wherever you wanted, just by enveloping yourself in some kind of material, stuck around.

Which brings us to the Pause Pod.

This project, which exceeded its Kickstarter funding in its first week, gives you the opportunity to create a private space wherever you need it by unzipping your Pause Pod and climbing inside.

Oh, and if you want to lie down, there’s a second pod. For your legs.

The Pause Pod is not an original idea—I’ve already written about the Privacy Pop Bed Tent, which allows people to create a bed-sized bedroom in a shared living space, and which I really liked because it was so clearly useful for kids, college students, and other people who might want a little privacy (and light-blocking material) when they sleep.

But the Pause Pod is meant to travel with you—it folds up and fits into a tote-bag-sized carrying case—and to be set up anywhere you might need a little break. The Kickstarter includes a series of images featuring a Pause Pod on a roof deck (with the caption “Enjoy some fresh air while you’re at it”) and a man inside a Pause Pod placed underneath a standing desk (“Working hard or hardly working?”).

There’s one image that appears to hint at what the Pause Pod is really for. It’s a living room, featuring a man wearing headphones inside a Pause Pod, with the leg pod fully extended. Next to him is another man, crouched on the carpet, entertaining a baby. A woman sits on the nearby couch and operates a video game controller, her eyes focused above the action on the floor, her face grimly determined.

Are these three people related? Are any (or all) of them romantically involved? Is this a “young couple who took on a roommate” situation, or a “single parent who has two roommates” situation, or a “roommate invited his brother and the kid over for the weekend and now he’s holed up in his pod while his brother’s entertaining the baby and I just want to play my video game for five minutes before I go back to my 60-hour workweek” situation?

Either way there is not enough space in this apartment for three adults plus a baby, and one adult is escaping through video games and the other is wrapping his body in a Pause Pod while also taking up the entire floor space with his legs, come on.

The Pause Pod might be about meditation. It might be about creating a private home theater by attaching your tablet to the interior tablet mount. But it is definitely about blocking out the other people you’re stuck living with, because your apartment is too small and you thought you’d be able to use the living room once in a while, just have it to yourself for once, but it looks like you’re going to have to set up your pod instead.

1. We Did Good, Billfold
2. Question Wednesday
3. What I Learned From Five Years of Writing and Editing for The Billfold
4. How a Program Assistant Dealing With a New Paycheck System Does Money
5. Classic Billfold: What I Wanted From My Move to Portland and What I Got
apartmentslifepodsreal-estateroommates