The Cost of Making Witches’ Brew 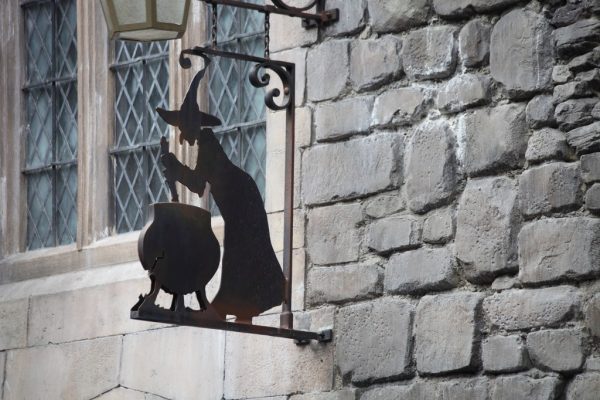 With the weather getting colder, and with Halloween upon us, I was looking for something that would warm me up while remaining seasonally on-brand for SEO purposes. I had just finished the last remaining leftovers from my batch of Fireball Soup, so I decided to take a walk around my neighborhood for inspiration. (Cost: $0.09 worth of wear on the soles of my shoes.)

“WHO DARES SLUMBER IN PROXIMITY TO MY ESTABLISHMENT OF BUSINESS,” a voice boomed, waking me from my recurring dream where I host a roundtable discussion with every single character from Harry Potter about supply-side economics. Dobby was just about to break down the Laffer Curve, so you can imagine my chagrin. I politely introduced myself to the store’s proprietor, and made note of her stunning black maxi dress and pointy hat. Wordlessly, she led me inside her shop.

“Here before you, I have mixtures and potions, vials and bottles of elixirs,” she explained as we walked past dusty, cobweb-covered shelves of colorful liquids, “The contents of which can summon powerful spirits, and make your wildest dreams come true. Tell me, what do you seek toda-” “MONEY,” I shouted (cost: $0.60 worth of Cough Suppressant Lumps, my generic throat lozenge of choice)! Once my new mysterious friend had picked herself off the floor, she reached for a vaguely greenish beaker from a high shelf. She uncorked it, and waved it under my nose. “This is a brew for fortunes true, drink it and great wealth will come to you.”

The potion smelled of old wallets and coin wrappers, with a slight hint of aspartame. It wasn’t necessarily unpleasant, but certainly it wouldn’t replace my morning mug of Thrift Coffee. But before I could put it to my lips, I asked, “Wait, what’s in this stuff?”

Le Fay cackled, and replied, “Eye of newt and heel of boot, a fly’s single wing and a bee without sting, a lion’s dried mane, a fossilized plantain, a banker’s remains, things too scary to name, and, oh yeah, aspartame.”

I reached for the potion, but Le Fay pulled it away from me, put it back on the shelf, snapped her fingers, and manifested a phone with a Square Reader, as if by magic. (Although she might have pulled it out of a pocket. Like I said, I need to get new glasses.)

“That’ll be $50,” she said, “though if you join the store’s mailing list I’ll knock a couple of bucks off the price.” At which point I laughed so loud and hard that every bottle in the store shattered, and the entire establishment folded in on itself to a single point of light.

Luckily, and thanks to my nightly 45-hour exercise regimen, I was able to get across the street before I was consumed by nothingness. The yawning chasm torn in the very fabric of reality was immediately replaced by an expensive condo for Amazon employees. Honestly, I didn’t know which was worse.

Back at my apartment, I pulled out my trusty slow cooker and decided to make my own version of Le Fay’s Money Brew. Even if one is pursuing the dark arts, one must be strive to be pennywise! (Unless you’re an evil demon sewer clown, in which case, you already are.)

The Money Brew lasted for three meals, so let’s break down the cost:

Newts, to the best of my knowledge, are not native to Seattle, and even if they were it seemed needlessly cruel to find one and remove one of its eyes. Even if it would look super-cute with a little eyepatch. I subbed a 14.5 oz can of chickpeas instead. Cost: $1.40

Not wanting to tax the soles of my shoes further after using the aforementioned $0.09 worth of wear I accrued on my sojourn, I retraced my steps to scrape the spent sole off the sidewalk. Unfortunately I wore down my soles even more in the process. Lesson learned for next time. Cost: $0.18

When the city legally requires you to compost, it’s easy to collect flies. I felt badly about killing a fly, but less badly about closing the lid to the compost bin and coming back 24 hours later. Cost: $0.00

Bees’ stingers fall off when they sting you, but I wasn’t about to endure that. Instead, I took my MacBook Air to the Washington Park Arboretum during prime stroller hour and waited. I wrote four 600-word articles in 20 minutes and then heard the telltale wail of a stung child. All I had to do was find the bee. Cost: -$120 (I actually earned money on this one!)

The Woodland Park Zoo has not only lions but also lion-tailed macaques and golden lion tamarins. I elected to clip a bit of mane from the latter, first because my $6,500 annual healthcare deductible means I can’t risk an accidental lion mauling, and second because I knew from my extensive online research that golden lion tamarins love eating insects. Guess who just happened to have three-quarters of a fly in her pocket? Cost: fly remains

Back to the compost bin! I never knew plantains had bones; I always thought that was just a dirty joke. Cost: $0.00 (technically $1.20 for the original unfossilized plantain, which you might remember from my plantain ice cream recipe)

Things too scary to name:

Did you know that you can find free aspartame packets at any Starbucks? You don’t even need to buy a latte! (After all, the secret to financial success is never buying lattes.) Cost: $0.00

TOTAL COST: $1.58, not counting my freelance earnings or the money Wells Fargo is paying to the Consumer Financial Protection Bureau

I chucked everything in the slow cooker and set it to “low.” After a few hours my apartment smelled like hot banana hummus, but I wasn’t feeling any richer (save for that extra $120, which I immediately spent on avocado toast, lots of bad decisions today). Perhaps I needed to recite an incantation. I kicked myself for not asking Madame Le Fay about this before time and space folded in upon itself. Of course the Gemino Curse is useless for currency, so I settled on singing a few bars of “Money” from the Cabaret original cast recording, but through an old toilet paper tube so I sounded extra spooky.

With that, the objects in my apartment began to shake! The lights began to flash! I made a mental note to make sure I was current on my renters insurance!

And then, she appeared. A spectral vision of Madame Le Fay hovered in the middle of my apartment, bathed in an eerie green light. Her mouth did not move, but I could hear her loud and clear.

“THE SECRET… TO ETERNAL WEALTH… IS…”

I grabbed my Bullet Journal(s) in anticipation of her next words.

I shot her a quizzical look. She shrugged, and disappeared.

Eventually I had a mug of the brew with a small green salad. I’ll add more salt and less fly next time.

This piece was written in collaboration with screenwriter and friend Josh A. Cagan (clever readers can guess which parts were written by whom). Follow @joshacagan—and if you’re in Los Angeles, head to Genghis Cohen tonight at 7:30 p.m. to see Josh doing comedy and spooooky readings with Nika Harper, Kiri Callaghan, Joseph Scrimshaw, and Brock Wilbur. Happy Halloween!

1. We Did Good, Billfold
2. Question Wednesday
3. What I Learned From Five Years of Writing and Editing for The Billfold
4. How a Program Assistant Dealing With a New Paycheck System Does Money
5. Classic Billfold: What I Wanted From My Move to Portland and What I Got
comedyfoodhalloweenhumormoney