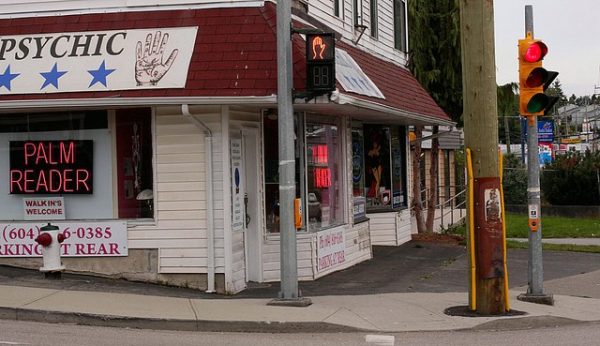 This piece was originally published on November 13, 2014. View old comments on the Wayback Machine.

The reason I knew about the storefront psychic Miss Patricia was because she had once offended my friend. Last fall, Miss Patricia read her palm and grimly warned to “Beware of the J name.” Everyone believed this advice to be about my friend’s terrible boyfriend Johan. I believed it, too. I had never seen a psychic before, but I wanted to hear my own exciting version of “Beware of the J name.” Who should I avoid in this life? What were some big changes I could make?

Miss Patricia in person was not what I’d pictured. I imagined she would be a heavyset lady in a long tiered skirt, but she was actually a petite young Latina wearing a pink velour Juicy Couture sweatsuit. Her hair was freshly washed and dark, damp waves cascaded down her back. She looked at me, nodded, and gestured languidly behind her, to a dark and narrow foyer with two wooden chairs and table. There was a five-dollar bill and two one-dollar bills arranged in the middle of the table, a poster of a face with three eyes on it, and nothing else in the room.

I sat down stiffly and Miss Patricia immediately grabbed my cold hand, tracing lines. Someone was watching SpongeBob SquarePants on the TV in the next room, which instantly destroyed any supernatural ambience. The first thing Miss Patricia said out loud was: “Who’s Michael?”

I was pretty surprised. “Michael is my brother.”

Well, Michael is one of the most common names in the world, I thought. Lucky guess!

The psychic began talking very loudly, accurately deducing some vague, general things about my day job (“you hate it”) and romantic relationships (“Girl.”). Things at the surface appeared okay, but they weren’t really. “The thing is,” Miss Patricia intoned, “is that you absorb more negative energy than anyone I’ve ever met. Anyone I’ve EVER met!”

Miss Patricia jabbed her finger towards my chest. “Tell me that’s not true!” Yeah, it seemed kind of true. But doesn’t every single person feel that way, on a bad day? “You need a Crystal Cleansing badly. I don’t tell just anyone to do this, but you really, really need one. It’s only a few hundred dollars.”

“No way.” I said. “I don’t even have that kind of money.” This was the truth. I work at a bar and live paycheck to paycheck, like most twentysomethings I know, and I had just paid my rent.

“You don’t even have a hundred dollars to spare on a Crystal Cleansing?”

Miss Patricia looked at me sadly, shaking her head. “Girl, when are you going to get your finances together? You have to stop living hand to mouth! This is a terrible, terrible way to be.”

Even though my rational self knew Miss Patricia’s money-shaming was probably contrived to make me do a Crystal Cleansing, it was still awkward to say out loud how little money I save, and hear her scolding me. Most people in my life tiptoe around the ‘money’ topic. No one ever gets on my case, except my dad, who worked his ass off for my family’s middle-class existence. The truth is I’m often careless with my money and just prefer live in denial.

Miss Patricia offered to do a Crystal Cleansing for the bargain price of 30 dollars, since my finances were so dire. I hesitated, and she asked, “Why the hell not? If nothing else, you’ll be out 30 bucks and have had a new experience.” This was an excellent sales tactic.

She handed me four pale pink crystals and told me to go home that night and meditate with them for 15 minutes. No red meat, no alcohol, no sex. Then come back the next morning at 10 a.m.

When my roommate came home and saw my pink crystals, she was in disbelief. She started laughing, and claimed practically anyone could intuit a lot from my general energy and appearance. “Most people aren’t that hard to read. You look at their clothes, shoes, age, how they hold themselves, hair, dental…”

I agreed with her in theory, but was fully invested in the experience at this point. I dutifully did everything Miss Patricia asked, even though ADHD makes meditating difficult for me. I didn’t manage to empty my brain for the whole 15 minutes, but I tried my best.

When I returned Tuesday morning, Miss Patricia was in an ebullient mood. She had dreamed of my past life the night before, with several major breakthroughs. Apparently, I used to be a man. I had not treated women well  —  hence my abrasive feminism in this life. I also had once fucked over someone named Omar, who was my old business partner back in Egypt. This lingering bad karma clarified why my finances were a hot mess, but the Crystal Cleansing had now cured it.

I was trying not to giggle at this point. I was a past-life womanizer? Who was Omar?? Miss Patricia intently described a very tall, very thin Alexandrian man with a facial scar. Then, perhaps sensing my doubt, she shifted gears. She guessed I was an artist. Of course, this could also be intuited from the paint and ink stains on my jeans and general grossness of my appearance. We dropped my past life and talked about how lonely and weird New York can feel for the next 20 minutes.

A curious thing happened three hours after I left Miss Patricia’s. My younger brother and I don’t text each other so often. We have a big age difference and wildly divergent interests. But that same afternoon, I get a message from Michael. The last time he had texted was six weeks earlier.

Hey,
You need to help me convince mom and dad to let me drive up to NYC to visit you before I go to school.

He was asking for a favor, just like Miss Patricia said he would. I swear it happened exactly like that, and within three hours of my reading. It actually ended up that Michael couldn’t come up that weekend. But still.

The other thing that happened was I wrote a long, heartfelt letter to my father. I apologized for my history of bad financial planning, and explained it was all because of my past life in Egypt, and that dickhead, Omar. Well, that’s what I wanted to write. I’d love to blame Omar, really, but my fiscal problems have much more to do with finding the topics of money and budgeting uber-dull, and sometimes tacky. When people start talking about how much things cost and comparing prices of products, part of my brain instantly zones out, and thinks, “Ugh. Must we??” It’s lame and childish, sure, but I’ve been working on it.

So, I wrote the letter and started a savings account. The kind that automatically transfers some money every week. I sold a bunch of stuff at Beacon’s Closet and put that in the savings account (a pathetically small beginning, but you gotta start somewhere). One year later, the account is slowly growing. And I joined a meditation class. Are these life changes all due to Miss Patricia? I don’t know. She might be a total hack: my roommate decided to get a psychic reading from her a month later. The first thing Miss Patricia asked my roommate:

AC Bern is an artist who lives in New York.

1. We Did Good, Billfold
2. Question Wednesday
3. What I Learned From Five Years of Writing and Editing for The Billfold
4. How a Program Assistant Dealing With a New Paycheck System Does Money
5. Classic Billfold: What I Wanted From My Move to Portland and What I Got
crystalsfamilypeople named Michaelpsychicsthrowback thursday