Going From the Best Food to the Cheapest Food 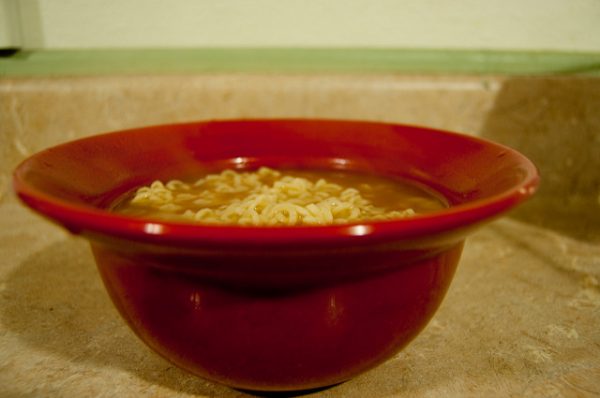 “If it’s not local, seasonal, and organic,” I grandly declared five years ago, “it’s not worth buying.” I sometimes think back to that moment, to past me who didn’t know what the future held, to past me who had been such a food snob as to look down her nose at canned things, processed food, and cake and brownie mixes that came neatly packaged in boxes. I was a fervent campaigner for what I termed as “real food,” and I rejected everything that didn’t fit into my reality.

That reality was rosy. I was in a good place in my life, despite struggling with unipolar depression. I didn’t have the pain of dealing with scarcity in any way, whether that was food or money or love. I loved my life, and I had the peace of mind to cook for myself, which I did, often. I made the mistake of assuming that my reality at the time was going to be my reality always.

It wasn’t. My life imploded and collapsed in on itself; in a series of unfortunate events I lost my home and my income from my baking business which I was no longer in a position to sustain. My life came apart at the seams as I struggled to hold onto any semblance of normality. My new normal was terrifying, especially in a country that doesn’t have any sort of a safety net to catch you when you fall. I began working part-time in a bakery while looking for another job. It didn’t pay much, but they did let me take food home every other day. It was a perk I was grateful for.

I desperately tried to get another job, but my age (mid-thirties) was against me. I was told that I didn’t qualify for jobs simply based on my age alone; when coupled with the fact that I had been self-employed it became doubly impossible. I had a brief respite when someone hired me to bake bread for them using high-quality organic ingredients, but then when it came time to pay me they refused. I took a hard loss on that one, and learned a harsh lesson. I returned to my part-time bakery job until a friend made me see that I could make a living writing. All the while, of course, my attitudes towards food were changing.

Although I’d always considered food a necessity, I had previously had the luxury of picking and choosing the food that would sustain me, and I always chose the best. I remember that I barely looked at price tags in the supermarket; if I wanted something I’d just buy it. I bought expensive olive oil and handmade pasta (as though that were somehow better than commercial pasta) and the freshest of fruits and vegetables. It was a good life, a life filled with plenty.

But that wasn’t my new reality — and I suddenly found myself looking for the cheapest food. When I shop I check price tags once, twice, three times. I can no longer afford fruits but sometimes I do treat myself to bananas when I’m feeling particularly rich. I pick vegetables that are marked down because they are “old stock” or bruised or damaged in some way. The processed food that I turned my nose up at in the past finds its way regularly into my shopping basket.

I remember a tirade against supermarket bread back in my glory days. I’m ashamed when I see how prejudiced I had previously been. “Sliced supermarket bread isn’t REAL bread.” That’s what I’d said. My face burns when I remember that, especially because I have become fond of the sliced multigrain bread that I buy now and would continue to buy even if my circumstances changed for the better.

I’ve learned a few tricks as well. I buy cheaper supermarket-brand stuff, leaving the other branded foods alone. I compare prices to see whether buying in bulk is cheaper — which it sometimes is. I buy things that I can make last for several meals; dried beans, for instance, give me lots of options. I watch for items that are on sale and stock up on them when I can. I pick up two-minute noodles because they make a good lunch, leaving me comforted and full as I work through the day. A sudden head cold a few months ago meant that I was craving soup, so I bought dehydrated soup in packets and cooked them over the stove with hot water. I just didn’t have the energy to make my own soup, although I still try to cook as much as I can (it’s cheaper than buying takeaway). Processed food in all its various avatars now nourishes me. Past me would have been shocked.

Ironically, it seems that the poorer you are, the more you end up spending on food. In the past, I spent about 20 percent of my income on groceries and fresh fruits and vegetables, but I didn’t worry about what I was buying because I had plenty of money left over. With a reduced income I still spend around 20 percent of what I earn on food — even though I buy cheaper things — and I have much less money left over. It’s a no-win situation, but one I’m stuck in. However, cooking seems to take less time than it used to, mostly because meals are easier to make. Half the time I end up reheating something or pouring hot water into a cup of noodles or a cup of soup.

The truth is that eating fresh, local, organic, and seasonal is indeed a great way to live your life, but it is a reality that comes with an awful lot of privilege. I hadn’t known that in the past. I didn’t see my own privilege then, but I do now in hindsight. I stood in my ivory tower and denounced food that feeds people and fills bellies, simply because I didn’t approve of it. I have learned that food comes in different shapes and forms, and with different labels on the packet. One type of food isn’t better than another when it comes to feeling satisfied, and it shouldn’t be used to make people feel bad about the food that they can afford.

1. We Did Good, Billfold
2. Question Wednesday
3. What I Learned From Five Years of Writing and Editing for The Billfold
4. How a Program Assistant Dealing With a New Paycheck System Does Money
5. Classic Billfold: What I Wanted From My Move to Portland and What I Got
financial strugglesfoodunemployment